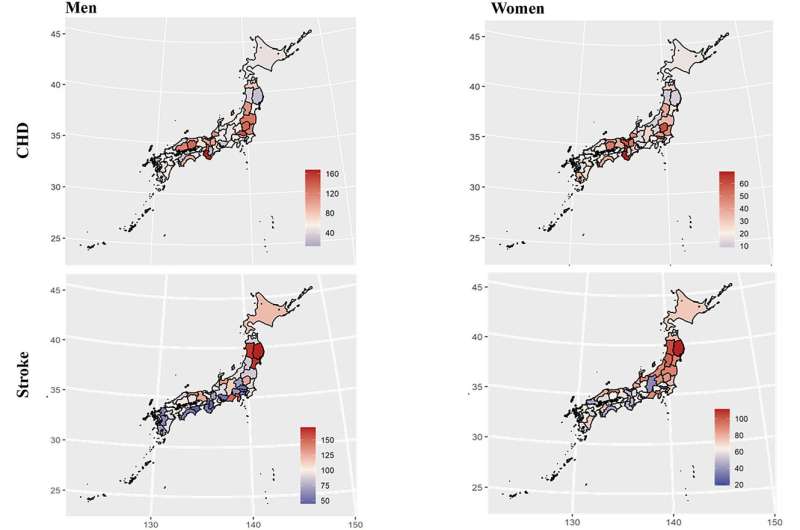 New research predicts that the number of deaths caused by coronary heart disease and stroke will decline between 2020 and 2040 across Japan.

The study, published in The Lancet Regional Health—Western Pacific, was carried out as part of a collaboration between researchers at the University of Liverpool and the National Cardiovascular Research Center of Japan.

Projections of future disease rates are necessary for governments to estimate funding required for health care, and for which health priorities, in a given timeframe. However, it can be challenging to make accurate predictions because of the variety of factors that contribute to disease rates.

“Key factors that need to be taken into account are population aging and population growth or decline,” says Dr. Eri Kiyoshige from the National Cardiovascular Research Center of Japan, who was the lead author of the study. “When it comes to cardiovascular diseases, other factors also play an important role, such as increasing trends in diabetes, cholesterol level, and body mass index recently observed in Japan.”

Previous studies have attempted to estimate future projections of coronary heart disease and stroke in Japan, yet did not account for various regional differences. Therefore, along with more conventional statistical modeling, the researchers employed a Bayesian age-period-cohort model that incorporates Japanese population estimates and the number of coronary heart disease and stroke deaths from 1995 to 2019 (for all men and women over 30 years of age).

“This model predicted that the number of national-level cardiovascular deaths in Japan will decrease from 2020 to 2040 by about 12%, despite population aging,” says Dr. Chris Kypridemos from the University of Liverpool, who was one of the authors of the study. “Rates are also predicted to decline in most prefectures over this same time period, although some regional differences are predicted.”

The new findings are expected to assist health policy-makers in making more accurate resourcing decisions, which may ultimately improve health services at the national and regional levels in Japan.

The research was a joint effort led by Eri Kiyoshige, Soshiro Ogata and Kunihiro Nishimura from the National Cardiovascular Research Center of Japan, and Martin O’Flaherty and Chris Kypridemos from the University of Liverpool.