Could this Japanese herb be the secret to slowing down ageing? ‘Tomorrow’s leaf’ eaten by SAMURAI is found to clear out disease-causing cells

A Japanese plant traditionally eaten by samurai warriors could hold the secret to anti-ageing, scientists claim.

The ashitaba plant has been used to aid wound healing and prevent infectin, and is known as ‘tomorrow’s leaf’ because it grows back so quickly after being cut.

Now, a unique natural compound in the plant has been found to help protect cells and delay ageing in various species and in human cells.

It works by encouraging a ‘cleansing and recycling’ process in cells, removing unwanted cells that can cause disease if allowed to build up.

Researchers said it is a step towards identifying anti-ageing therapies which don’t require people to stick to beneficial but often loathsome diets and habits. 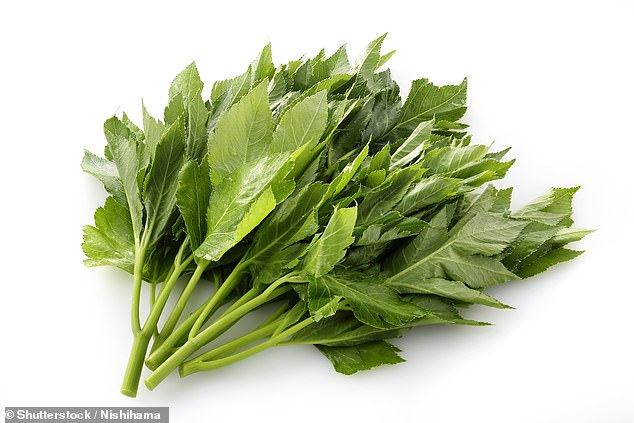 The researchers at the University of Graz in Austria, led by Professor Frank Madeo, detected a compound called 4,4′-dimethoxychalcone, otherwise known as DMC, in the leaves of the plant.

‘This fuels the expectation that DMC may be therapeutically applicable in humans’, the authors wrote in the journal Nature Communications.

The team started by testing how the substance affected yeast cells, commonly used in experiments to complement animal testing.

They discovered it helped to protect the yeast cells from the effects of ageing, and that the substance performed as well – or even better than – other cell-protecting compounds like resveratrol, which is found in grape skin.

An anti-ageing drug may be on the horizon using the plant supplement quercetin – found in red wine, onions and green tea, research suggests.

Scientists have discovered a drug cocktail that clears senescent – or ‘zombie’ – cells from the body.

Senescent cells are alive but non-functioning and have been linked to everything from arthritis to Alzheimer’s.

They are also thought to cause the deadly lung disease idiopathic pulmonary fibrosis (IPF) by triggering inflammation.

The findings, published The Lancet online journal EBioMedicine, raise hope that senolytic drugs may lead to a new way of targeting age-related disease.

The team then tested DMC’s effect on cells in both worms and fruit flies – common test subjects in medical research.

‘Remarkably, chronic DMC treatment… prolonged the median lifespan of both [flies and worms] by approximately 20 per cent,’ the study said.

Additional tests showed the compound helped protect cells in mice hearts through the autophagy process, which is when the body cleans out damaged cells and regenerates new ones.

‘This is a cleansing and recycling process,’ Professor Madeo said. It removes ‘superfluous material, especially cellular garbage like aggregated proteins’.

That ‘cleaning’ process is key to sustained good health as the body ages. When cells fail to promptly and efficiently remove damaged parts, they can build up and that can lead to diseases including cancer.

DMC also showed signs of protecting against a kind of liver damage caused by alcohol intoxication.

The team tested DMC’s effect on several types of human cells and found the substance helped to slow ageing by preventing senescence – the deterioration of cells which are unable to divide or leave the body.

‘The present work identifies the flavonoid 4,4′-dimethoxychalcone (DMC) as an anti-ageing compound with cardioprotective effects in mice and the potential to promote longevity across species,’ the authors said.

‘The experiments indicate that the effects of DMC might be transferable to humans, although we have to be cautious and wait for real clinical trials,’ Professor Madeo said.

Professor Madeo said the next steps in research would include testing whether the positive effects of DMC in mice hearts extend more broadly to protect mice against ageing and age-related diseases.

‘Eventually, clinical trials on humans are needed,’ he added.

Science has previously given hope that diets such as fasting, pills, exercise and ingredients in elixirs are behind an anti-ageing intervention.

The latest findings have encouraged the search for a medical alternative.

The paper said: ‘While the beneficial effects of certain behavioral and dietary strategies, especially calorie restriction, are uncontestable, most individuals have difficulties to strictly and permanently adhere to them.’

The team of researchers found the DMC compound by looking at a class of substances called flavonoids, which have been shown to have a range of beneficial effects, from anti-inflammatory properties to protecting against brain degeneration and cancer.

They screened 180 compounds representing various subcategories of flavonoids, looking for candidates that might have the natural ability to ‘counteract age-related cell demise’ before coming across DMC.

DMC, which has only been reported to possibly help in malaria and leukaemia studies, is not found in any other natural source to the researchers knowledge, making the ashitiba plant particularly special.

The plant, which is said to be a staple ingredient in the diet of samurai, pre-modern Japan warriors, is hard to come by in the UK.