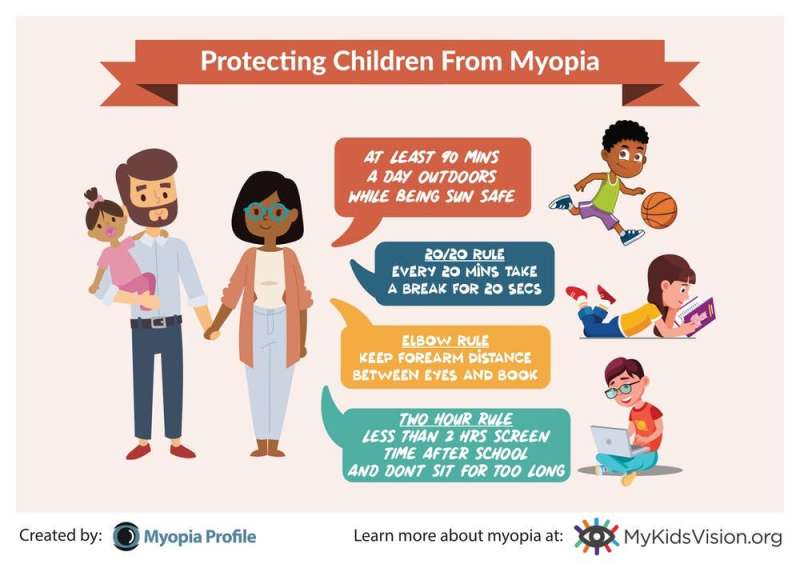 Eye doctors had planned to celebrate 2020 as the year of vision (as in seeing 20/20). Instead, it will be known as the year that worsened the world’s vision for decades to come. Scientists are attributing this latest health issue—one that is hidden in plain sight—to the pandemic.

Rates of myopia, also known as nearsightedness or shortsightedness, have been increasing worldwide for decades. Half of the world’s population is predicted to be myopic by 2050.

The length of time children spend viewing digital screens has been exacerbated by a massive increase in remote schooling, directly contributing to further increases in childhood myopia. Home-schooled children of the COVID-19 era are at risk of becoming the visually compromised population of tomorrow.

A recent study of more than 120,000 children in China demonstrated that six- to eight-year-olds who were in lockdown for the first six months of 2020 are more myopic than their counterparts from previous years.

For a child with myopia, distance vision is blurry while near vision remains clear. In the past, the increase in myopia diagnoses from year to year was given little thought, since it was correctable with glasses or contact lenses. However, eye-care professionals now know that the younger a child becomes myopic, the higher their prescription may eventually become, and high prescriptions are bad news for eyes.

There is an established link between high myopia and increased lifelong risk of devastating eye diseases. Someone who has a prescription of more than six corrective units, or dioptres, (a prescription of -6.00) has a 90 percent likelihood of being visually impaired by the age of 75.

A number of eye conditions are more prevalent in highly myopic adults including cataract, glaucoma, retinal detachment, retinal degeneration and other ocular diseases that can have a lifelong impact on their vision. These complications typically happen in later life, so concern for children may seem irrelevant or premature. However, there are other more immediate effects of high prescriptions.

A child or teenager with a fairly high prescription will be visually debilitated when not wearing their glasses or contacts, making them totally dependent on their vision correction. As an example, someone who has 10 dioptres of myopia sees anything beyond half an arm’s length as blurred. And don’t think that laser vision correction will save the day once they’re old enough. That degree of myopia may leave them ineligible or subject to a less successful outcome.

The question then turns to what causes myopia in the first place, and what can be done about its onset and progression. 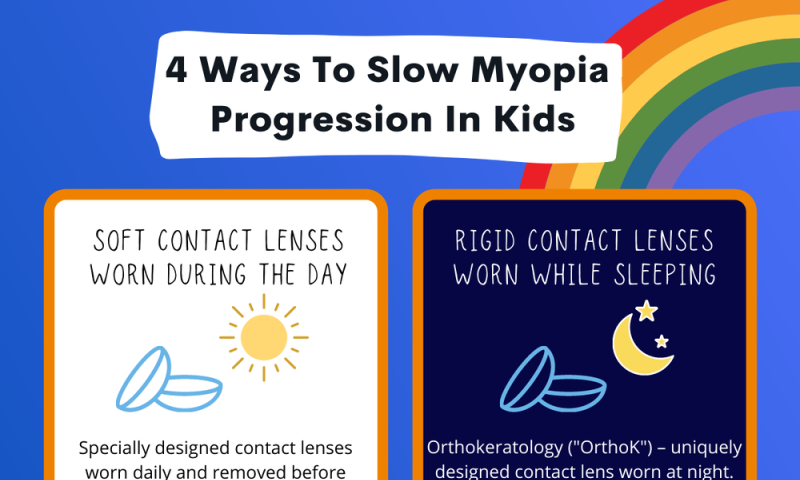 The biggest factor that can’t be changed is parental myopia. A child is extremely likely to become myopic if both parents are myopic.

One factor that is modifiable is the amount of time children spend on “near tasks,” those that involve viewing things closer than 40 centimeters from their eyes.

Extended periods of time spent focused on short distances is contributing to myopia increases. Digital screens have been targeted as the reason, but is it the electronic display itself or that a child holds a tablet or phone very close for extended periods? While there is some debate, the short focusing distance is the more likely culprit.

Even with the digital onslaught, all is not lost. Parents and caregivers can help prevent children from becoming nearsighted and slow down the rate at which the condition progresses.

Simply spending more time outside can delay the onset of myopia. Direct sunlight plays a part, as well as the long-range focusing while playing outdoors. Restricting screen time is an option with optometrist-endorsed recommendations relating to screen times for children.

For children schooled at home where limits are not practical, ensure that the screen is not being held or positioned too close to a child, encourage regular breaks and use the 20-20-20 rule: look 20 feet (seven meters) away every 20 minutes for 20 seconds. Some researchers have found that children who go to bed later are more likely to be myopic—an added incentive for parents who are looking for reasons to call it a night.

A child’s myopia usually continues to progress until around the age of 16, but about 10 percent of myopic patients’ vision keeps worsening into their early 20s.

Many options exist for vision correction, but more importantly, there are an increasing number of options available to slow down the progression of myopia and reduce the risk of developing sight-threatening complications in later life. They range from contact lenses and glasses specifically designed to slow down myopia progression to precisely formulated eye drops.

These can be discussed with your eye-care practitioner, who will recommend the best path based on each child.