There's an old saying in journalism, "If it bleeds, it leads." And, with many of us tuning into television news much more in January than we would when back at work, it can be kind of overwhelming to check back in with the world and realise that things are truly not good.

The US is a total shitshow. The president is an unhinged narcissist, and people are being forced to work without pay in the government shutdown. England and the rest of the United [for now] Kingdom: not doing so hot either. And in Australia we have gendered violence, children still on Nauru, and Nazis protesting on the beach. 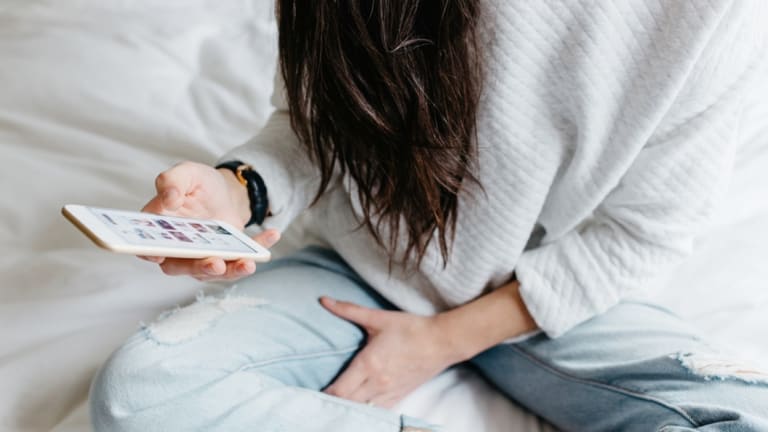 Sometimes, the news can leave us feeling blue.Credit:Stocksy

The news is a daily (hourly, minute-ly) reminder of fascism, xenophobia, sea levels on the rise… with social media, humans can’t go a millisecond without finding out about the latest school shooting, terror attack, or sex crime.

Well, because I still believe in the benefits of an informed (and enraged) citizenry, I’m afraid I cannot personally advocate for Total Ostrich Mode, aka “not consuming the news at all” (although just screaming into a pillow is permitted on occasion). If you can channel your anger into something productive, that's great. Maybe you could take out the recycling. Smash the patriarchy, save the planet.

But, when you're done, there are other ways to counteract the feelings of helplessness you might have when being bombarded daily with the worst the media has to offer. Rather than scrolling through your newsfeed each night before bed and giving yourself teeth-falling-out dreams, perhaps you could try one of the following calming, control-regaining techniques?

They work for me, and I’m about as despondent over crumbling democracy and devastating climate crisis as it gets!

An informed citizen doesn’t have to be gathering information over breakfast, on the toilet, astride an exercise bike, during their commute, and right before going to sleep (or trying to go to sleep, anyway). A once-per-day news dump should be sufficient to keep you in the know without also keeping your blood pressure higher than Snoop Dogg.

If you can’t dodge the 24-hour news cycle, for every @WashingtonPost you follow, add a palliative account to the mix. I recommend @PepitoTheCat, which is just time-stamped black-and-white footage of some cat in France coming and going through his cat door, accompanied by the captions “Pépito is out” or “Pépito is back home.” I like to scroll through Pépito’s feed before bed. It’s like counting sheep, but instead you’re counting the same French cat over and over again. Trés relaxing.

It may seem counter-intuitive, but doing a deep dive into whatever single current event is giving you the biggest case of the what-ifs can help you vanquish some of your more paranoid fantasies. For example, researching how the “nuclear football” actually works and learning that a certain feeble-minded president would have to memorise certain information in order to launch an attack may have done wonders for a certain someone’s ability to stop worrying (quite so much) about the prospect of this particular mushroom shitcloud sprouting anytime soon.

Drafting an angry letter – to a global leader, a local representative, or, say, morally repugnant NRA spokeswoman Dana Loesch – can really get the mad out of you. Journaling is scientifically proven to help calm you down by moving all those burning, churning thoughts out of your head and onto the page. And you don’t even have to send your angry missive to reap the in-the-moment benefit, but for the cost of a stamp it might be nice to know it’ll reach its intended target. Or at least clutter their inbox, which in my opinion is a fate worse than death.

When I’m feeling powerless about the state of the world, one thing that brings me comfort is donating to a cause, be it a natural disaster relief fund, a local charity, or just a single person who needs a hand. Is this my economic privilege talking? Sure, but if spending my funds this way makes me feel better and helps someone less fortunate, all I see is a two-for-one special on good deeds. And “giving” needn’t require a cash outlay. Time and energy spent calling your reps to protest inhumane refugee policies, or volunteering at a women's refuge, or mocking up some zesty protest signs and taking a brisk walk around your nearest city centre will help you sleep better in more ways than one.

Now if you’ll excuse me, I have a French cat’s whereabouts to monitor.

This is an extract from Calm the F**k Down by Sarah Knight (Hachette Australia, RRP $29.99)