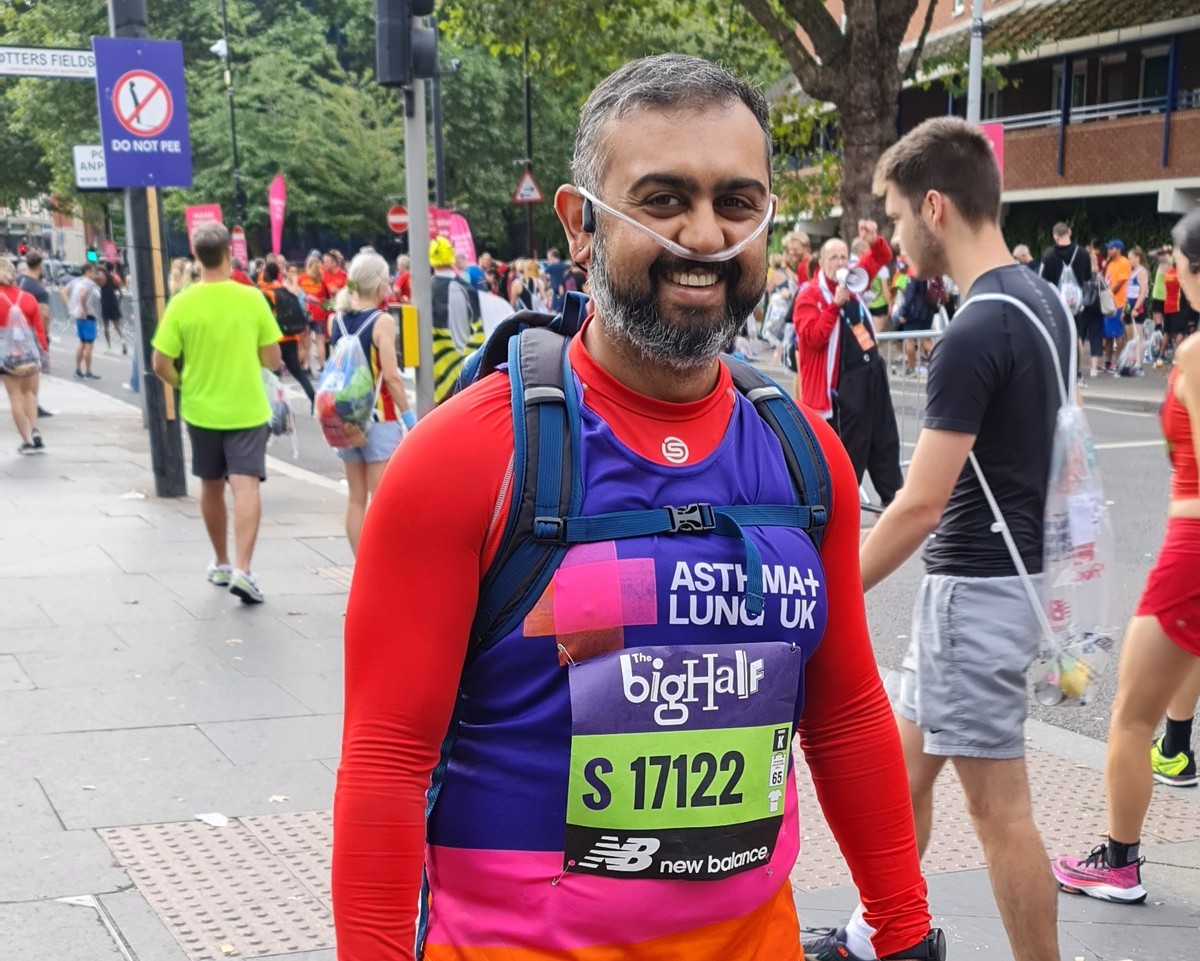 There’s something ironic about the fact that I was probably the fittest I’d ever been when I was first diagnosed with a serious lung condition.

An avid runner, by 2019 I’d just completed my first half marathon and had also lost two and half stone combining weekend runs with personal training sessions at my gym. I was as healthy as I could be. Or so I thought.

In July of that year, I was climbing the stairs to the platform to catch my train to London where I work for a construction company, when I first noticed something was wrong.

I was so breathless by the time I reached the top, I had to miss a couple of trains before I could continue my journey.

The first time it happened, I felt scared but tried not to show it, thinking I would be fine.

But when this occurred again the next day, and the day after, I felt like there was something seriously wrong and I needed to get it checked.

I then noticed that, instead of completing my usual 10k run at weekends with ease, I could barely make it up the road past a few houses outside my home in Harrow, Greater London, without needing to stop to catch my breath.

I went to see my GP in August 2019 who referred me to hospital for tests.

Initially, I was told by the GP it might be asthma, but after waiting a month for a proper diagnosis, I decided to use private healthcare through my work and went to see another specialist.

This doctor thought I had a breathing disorder (I wasn’t given a name for it) and I was prescribed eight sessions of breathing physiotherapy.

At this point I thought, ‘Ok that’s fine, I’ve done physio before and it doesn’t seem to be overly serious. I’ll be OK.’

I did this physio course over nearly a year due to the Covid lockdowns. It was quite frustrating. Even though we were in lockdown and everyone was limited in what exercise they could do, I thought that, with the physiotherapy, I might have been able to at least go running – but I wasn’t getting any better.

Things still didn’t improve and by August 2020 I was given a CT scan and further tests, as my condition had deteriorated further. I would say the pandemic delayed my diagnosis by eight or nine months.

At this point, general day to day life was hard. I would struggle with simple daily tasks, smells would set me off and I’d have coughing fits. Even if I laughed, I struggled.

I was diagnosed with Interstitial Lung Disease (ILD) – something I’d never even heard of. It’s an umbrella term used for a group of lung conditions that damage the lung tissue. There are more than 200 different ILDs.

When I asked the specialist what had caused it, he told me that I had an underlying autoimmune condition called diffuse systemic sclerosis that had brought it on.

My lungs were scarred and coupled with thick layers of collagen inside my body caused by the sclerosis, this was slowing down the process of getting oxygen into my blood.

I started chemotherapy immediately, in January 2021. The chemo was to suppress my immune system (autoimmune conditions sometimes mean you have an overactive immune system).

I was in a dark place for a long time. I worried about how I could carry on living a life that I loved, and if my wife Sheetal, 35, and I could ever start a family. I was told the chemotherapy might affect my fertility and was advised not to try to conceive naturally.

Having to give up running and working out had a huge impact on me too. I felt isolated, as sport had been the focus of my social life. I have an amazing support network, but I’d get jealous if my friends went for a run or a simple walk which I couldn’t do.

There is no current cure for ILD so all the doctors could do was give me chemotherapy, steroids and immunosuppressants to try and stabilise my lung function. Hopefully this would slow down its progression.

Chemotherapy was tough, along with its side effects. Most appointments I had were luckily local but generally any appointment I had, I had to go on my own due to the pandemic.

I was still working and didn’t take much time off work. I didn’t want to stay in bed for long periods of time and I wanted to keep my mind preoccupied.

Then I was referred to a respiratory team who carried out an oxygen assessment on me. They’d check my oxygen saturation levels at rest and when active, firstly without and then with oxygen.

They suggested I try using oxygen when I exercise, which would give me the opportunity to walk and go to the gym.

Having the oxygen gave me a sense of freedom and independence.

As soon as I received it I started back up with my personal trainer. We obviously started slow, a lot of the exercises at the beginning were trial and error to see how they affected me.

When I was diagnosed, I could barely have a conversation or even laugh without having a coughing fit, but by August last year, I was able to go out for walks and even go to the gym. I felt the positive impact on my mental health almost instantly.

And now I’m going for an even bigger prize – completing the London Marathon.

Taking part in the Marathon had always been a dream of mine and I’d been planning to apply before being diagnosed with ILD.

When the applications opened earlier this year, I realised that it might be my last opportunity, because as time goes on my condition could get worse. I also wanted to raise money for Asthma + Lung UK, who helped me when I was diagnosed, and help others with lung conditions.

So, I asked my consultant whether it would be safe for me to take part – walking, not running the 26-mile route through the city. He checked my oxygen levels and said I’d be fine, as long as I used my oxygen tank to help.

Walking with the tank feels like when you’re in school and have a heavy rucksack with all your school books. The tank itself is a 30cm cylinder which I fill up with liquid oxygen from a bigger tank

I had to buy a rucksack and put eyelets into it for ventilation.

I began training for the marathon in April this year, starting with two-hour long walks a couple of times a week, then building up to five to 10 miles twice a week, and I’m now up to 10-15 miles three times a week.

Everyone has been very supportive. Friends, family and colleagues – even people I don’t know have approached me or donated money. It’s amazing how much awareness this is getting.

But people know how determined I am and how much I want to walk through that finish line, no matter how long it takes. I’ve had many offers for walking buddies too, so for a lot of my walks I’ve had some good company.

I estimate that it will take me eight hours, using three oxygen canisters, but to be honest, I don’t care if it takes me all day or I finish outside the seven-hour cut off time to receive a medal. I’m just adamant that I will finish it.

As far as I know, only one other person has completed the London Marathon with oxygen – I’ve been told I will be the first man ever to do it, which is a huge honour.

My goal is to show others that they don’t need to let a lung condition or any condition hold them back. They may have to do things differently, but they can still do the things they love.

For me, the thing I love is exercise – and I know the moment I cross that finish line – whatever time it takes – will be the proudest of my life.