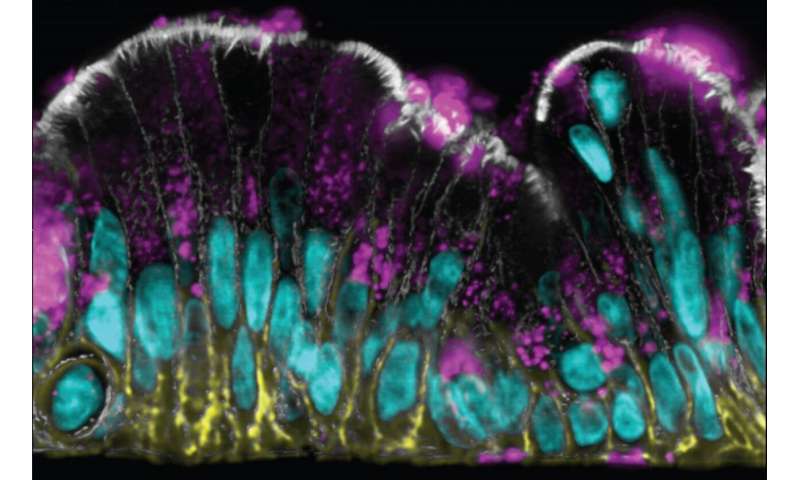 We have a mutualistic but complicated relationship with the collection of microbes in our gut known as the intestinal microbiome. This complex community of bacteria breaks down different food components, and releases nutrients such as vitamins and a plethora of other factors that control functions in tissues way beyond the intestinal tract. However, the sheer numbers of microbes also present a threat as they can trigger inflammation, which is thought to be at the root of many intestinal diseases, including inflammatory bowel disease, radiation-induced intestinal injury, and some cancers.

To allow the uptake of beneficial substances from the gut lumen, and at the same time prevent gut microbes from contacting the intestinal epithelial tissue surface, specialized cells called goblet cells continuously produce mucus, the slimy goo-like substance that coats the entire intestinal surface. Mucus thus far has been notoriously difficult to study: its structure quickly disintegrates in surgically removed sections of the gut, the system most often used to study mucus, and no in vitro culture system has been able to reconstitute an in vivo-like mucus layer with the natural structure seen in living intestine outside the human body. Adding to these difficulties, mucus also differs between humans and other species, different sections of the intestinal tract, and even different individuals.

Now, focusing on the large intestine or colon which houses the greatest number of commensal microbes and has the thickest mucus layer, a team of tissue engineers at Harvard’s Wyss Institute for Biologically Inspired Engineering has developed a colon-on-a-chip (Colon Chip) microfluidic culture device lined by patient-derived colon cells that spontaneously accumulates a mucus layer with the thickness, bi-layered structure, and barrier functions typically found in normal human colon. The mucosal surface in their model also responds to the inflammatory mediator prostaglandin E2 (PGE2) by mounting a rapid swelling response. Their findings are published in Cellular and Molecular Gastroenterology and Hepatology.

“Our approach provides researchers with the opportunity to find answers to questions about normal and disease-associated mucus biology, such as its contributions to intestinal inflammatory diseases and cancers, and complex host-microbiome interactions,” said Founding Director Donald Ingber, M.D., Ph.D., who is the senior investigator on the study. “Importantly, we use patient-derived cells to line these devices and so this represents an entirely new approach for personalized medicine where it can be possible to study how mucus functions or dysfunctions in a particular patient, and to tailor therapy accordingly.”

Ingber is also the Judah Folkman Professor of Vascular Biology at Harvard Medical School and the Vascular Biology Program at Boston Children’s Hospital, as well as Professor of Bioengineering at Harvard’s John A. Paulson School of Engineering and Applied Sciences. His team is part of a multi-institutional collaboration supported by a Cancer Research UK’s Grand Challenge grant in which his Wyss team investigates how inflammation-related changes contribute to formation of cancers, including colon cancers. The Grand Challenge is an ambitious international cancer research initiative, supporting world-leading teams of scientists to take on some of the toughest challenges in cancer, and giving them the freedom to try novel approaches at scale.

The team’s approach starts out with patient-derived colon cells from colon resections and endoscopic biopsies that are first grown as “organoids”, tiny organized balls of colon tissue that contain mainly epithelial stem cells. After fragmenting the organoids, their cells are used to populate the upper of a two parallel channels of a microfluidic chip that are separated by a porous membrane. Simply by perfusing the channels continuously with nutrient medium, the colon stem cells grow into a continuous sheet and form highly functional goblet cells that secrete mucus.

“Growing the cells on-chip under flow results in about 15% of epithelial cells spontaneously differentiating into Goblet cells. Distributed throughout the epithelium, these produce an in vivo-like mucus layer,” said first-author Alexandra Sontheimer-Phelps, a graduate student from the University of Freiburg, Germany, working in Ingber’s group. “At the same time, other epithelial cells that keep dividing also replenish the Goblet cell population just like in living colon, which means that the chip can be maintained in steady-state conditions for more than two weeks, which makes it highly useful for longer-term studies.”

The Wyss team showed that the colon epithelium in the chip is fully polarized with distinct markers restricted to its lumen-exposed, mucus-secreting side and its opposite membrane-binding side. Its goblet cells secrete the major mucus protein mucin 2 (MUC2), which when linked to complex chains of sugar molecules, assembles into multi-molecular network or gel that takes up water. “Our approach actually produces the bi-layered structure of normal colon mucus with an inner dense layer that we show is impenetrable to bacteria-mimicking particles flowed through the intestinal channel, and a more loose outer layer that allows particles to enter. This has never been accomplished before in vitro,” said Sontheimer-Phelps.

To investigate the functionality of the mucus, she and her co-workers exposed the chip to the inflammatory mediator PGE2. The mucus underwent rapid swelling within minutes and independent of any new mucus secretion, and this process of mucus accumulation can be visualized in living cultures by viewing the chips from the side with dark field illumination. This dynamic response could be blocked by inhibiting one particular ion channel, which pumps ions into the colon epithelium and passively allow water molecules to follow and apparently, this drives mucus swelling when stimulated by signals such as PGE2.