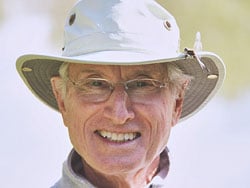 Jack. S. Remington, MD, the Stanford University clinical scientist who developed a test to identify babies at risk for dangerous toxoplasmosis, died on April 8 at the age of 90.

Remington was professor emeritus of infectious diseases at Stanford Medicine. A legendary researcher, Remington was described by colleagues and trainees as a dogged clinician. Known as “Stat Jack” for his sense of urgency, he retired in 2005.

He died after a fall; it was the last of many. When he wasn’t treating patients or conducting research, Remington was often rock climbing. Friends said he had broken many bones but was always a passionate climber.

Remington was retired when Upinder Singh, MD, arrived at Stanford. Now she is chief of infectious diseases and geographic medicine at Stanford Medicine. Singh told Medscape Medicdal News that Remington was a bright, forward-thinking scientist.

Remington conducted research at the Palo Alto Medical Foundation (PAMF), part of the Sutter Health network. He ran a toxoplasmosis serology lab, and it was his baby, Singh said. In 2019, it was renamed for him: The Dr Jack S. Remington Laboratory for Specialty Diagnostics.

While he conducted research at PAMF, he treated patients at Stanford, where he could see his research benefit them.

“What he held closest to his heart was that scientific endeavors should help patients,” Singh told Medscape.

Born in Chicago in 1931, Remington did his undergraduate work at Loyola University in Chicago and the University of Illinois, where he graduated from medical school in 1956, according to a statement from Stanford. He spent 2 years as a senior assistant surgeon for the United States Public Health Service and as a researcher at the National Institute of Allergy and Infectious Diseases.

There, he conducted key research on Toxoplasma gondii, a usually dormant parasite that poses a serious risk to anyone with a compromised immune system — a group that includes babies, transplant recipients, and people with HIV. T gondii is the reason pregnant women are told not to clean out litter boxes, because it can be spread through cat feces. Humans also contract toxoplasmosis by eating contaminated meat. The Centers for Disease Control and Prevention estimates that 300 to 4000 babies are exposed each year and develop toxoplasmosis. Often symptom-free for a period, the children can go on to develop vision problems or developmental delays.

Remington developed a blood test that measures a baby’s exposure and, therefore, risk for toxoplasmosis. According to the Stanford announcement, “The test distinguished between antibodies that a newborn has passively acquired from its mother through the placental barrier and antibodies that indicate a newborn has actually been infected in the womb by pathogens, notably T. gondii, that had been residing in the mother’s tissues. The latter case meant a baby needed immediate treatment to stave off active toxoplasmosis.”

Remington also led clinical trials and developed drugs to treat the condition. Stanford reports that he authored or coauthored more than 600 articles and held 11 patents.

He also coauthored the most authoritative textbook in the field. Remington and Klein’s Infectious Diseases of the Fetus and Newborn Infant is now in its eighth edition.

Friends and colleagues remember him as a dedicated mentor, evidenced by the many trainees who traveled to his 70th birthday party, said Philip Pizzo, MD, professor of pediatrics and immunology at Stanford Medicine. Pizzo, the former dean of the School of Medicine, met Remington in 1977 after presenting a research paper on the subject of the immunocompromised host at a New York meeting of the IDSA. They became lifelong colleagues and friends.

Remington had his own kind of confidence and self-assurance, Pizzo said: “He climbed the most challenging rock faces in the world. It takes a certain kind of personality to do that.”