Japanese people don’t suffer health problems of a 65-year-old until they turn 76 – while those in Papua New Guinea start suffering at 46 (so how does your country fare?)

People in Japan are fortunate to not suffer the health problems of the average 65-year-old until they are 76, a study has found.

This is 30 years more of healthy life than those who live in Papua New Guinea, who will begin to suffer ill health when they’re just 46.

The results are from the first study of its kind, which evaluated the rate at which people develop age-related diseases across the world.

Britons won’t experience the problems of a 65-year-old until they are 70, while Americans aren’t far behind on 68 years. 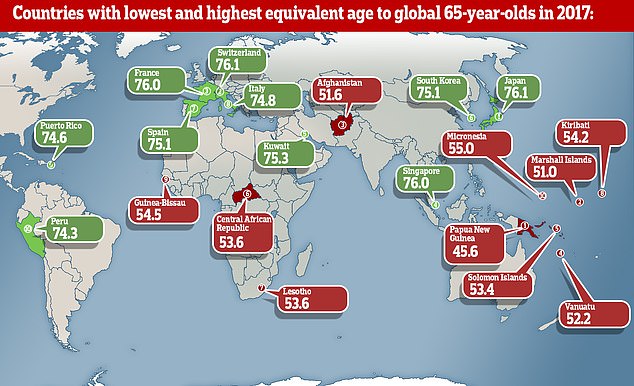 A study published in The Lancet shows at what age people across the globe will experience the health problems of an average 65-year-old. Japan ranked the highest at 76.1 years

Dr Angela Chang, from the University of Washington, said the findings reveal the wide variations in how well people age across the globe.

She said: ‘These disparate findings show that increased life expectancy at older ages can either be an opportunity or a threat to the overall welfare of populations, depending on the ageing-related health problems the population experiences regardless of chronological age.

‘Government leaders and other stakeholders influencing health systems need to consider when people begin suffering the negative effects of aging.’

They measured how much of a burden these diseases had on the amount of health years lived using global average 65-year-olds as a reference.

COUNTRIES WITH THE HIGHEST EQUIVALENT AGE TO 65

COUNTRIES WITH THE LOWEST EQUIVALENT AGE TO 65

Even among high-income countries, the differences are wide: 76-year-olds in Japan have the same level of age-related disease burden as 69-year-olds in the US, the authors wrote.

The study of 195 countries was published in the international medical journal The Lancet Public Health.

It found that in 2017, people in 108 countries developed problems associated with ageing before they hit the age at which it would be expected.

Whereas those in 87 countries experienced slower onset of ageing.

Globally, the most amount of deaths and healthy years lost caused by age-related diseases were those caused by ischaemic heart disease, brain haemorrhage, and chronic obstructive pulmonary disease (COPD).

The authors said: ‘Understanding which factors contributed to the successful delay, such as high physical activity, lower smoking rate, and better access to care, could shed light on how to reduce the projected burden of population ageing.’