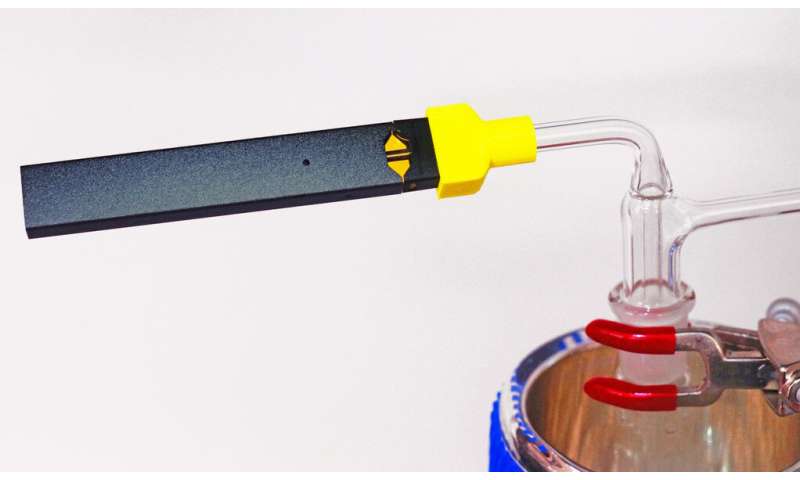 When it comes to e-cigarettes, the ingredients listed are not all that users are consuming. Yale researchers found that chemical reactions in flavored liquids of the popular Juul e-cigarette create unexpected chemicals that can irritate users’ airways.

The researchers focused on acetals, which are chemicals that form when the common flavorant vanillin interacts with alcohols that carry the nicotine and flavors in e-cigarettes. Led by the lab of Julie Zimmerman, professor of chemical and environmental engineering at Yale, the study was published July 30 in the American Journal of Preventive Medicine.

Despite the popularity of Juul, little is known about the composition of its aerosol (commonly referred to as “vapor”). The researchers used a “vaping machine” custom-built in Zimmerman’s lab to analyze the chemical makeup of various flavors of the Juul refill cartridges, including “Crème Brulée,” “Fruit Medley,” and “Cool Cucumber.”

“We were able to detect these acetals bothin “Crème Brulée’ e-liquid as well as in the generated from it,” said lead author Hanno Erythropel, adding that this is the first report of the presence of glycerol acetals in e-cigarette aerosol. Erythropel, an associate research scientist in Zimmerman’s lab, also noted that 60%-70% of the acetals transferred from the liquid to the vapor.

“People often assume that these e-liquids are a final product once they are mixed,” Erythropel said. “But the reactions create new molecules in the e-liquids, and it doesn’t just happen in e-liquids from small vape shops, but also in those from the biggest manufacturers in the U.S.”

Co-author Sven-Eric Jordt at Duke University said the research team didn’t expect to find so many additional chemicals formed from vanillin, a compound used for vanilla flavoring. The chemical is banned in traditional cigarettes but allowed in e-cigarettes. “We were surprised that levels in Juul vapor were already close to safety limits for workplaces where vanillin is used, such as in bakeries and the flavor chemical industry,” Jordt said. Little is known about the health effects of inhaling the resulting acetals, but research indicates that chemicals resulting from vanillin are more likely to irritate the airways than vanillin itself.

In the Juul products tested, most of the acetals resulted from the reaction with glycerol. The researchers also noted that four of the eight flavors tested, including “Fruit Medley,” contained menthol, a compound used to counteract nicotine’s bitterness and that may increase nicotine intake.