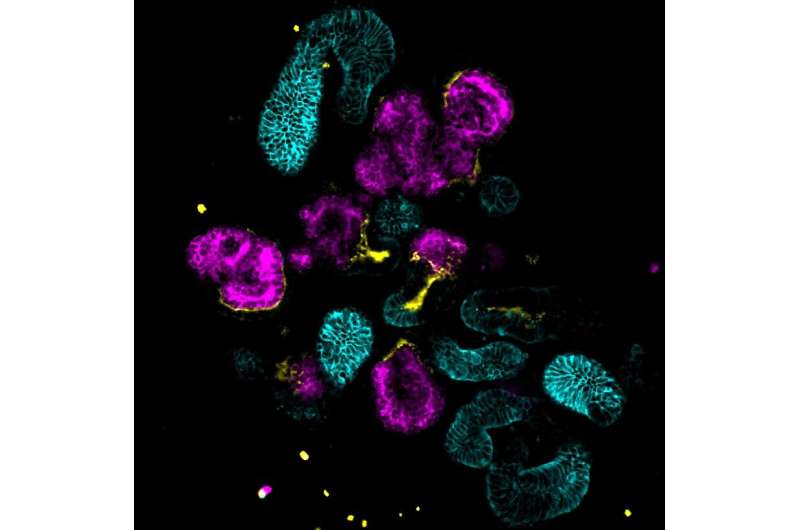 Researchers have solved a medical mystery in a poorly understood disease by uncovering which cells cause tumors in patients with tuberous sclerosis complex (TSC). As described in Cell Reports, they did this by creating genetically engineered kidney organoids, or “mini-kidneys” grown from human tissue.

“The cells at the origin of tuberous sclerosis tumors have been a mystery for decades,” said senior author Dr. Bill Stanford, senior scientist at The Ottawa Hospital and professor at the University of Ottawa. “Our results can help find possible treatment targets for this challenging disease.”

TSC is a rare genetic disease that causes benign tumors in the skin, brain, kidneys, heart or lungs. TSC tumors are very diverse, arising in children or adults with a range of symptoms from mild to life-threatening and often include seizures and kidney problems. There is no cure and treatment options are limited.

“Kidney disease is the leading cause of death in patients with TSC. Around 60 to 80 percent of patients develop tumors in their kidneys, often reducing kidney function and sometimes leading to catastrophic bleeding,” said lead Dr. Adam Pietrobon, MD-Ph.D. student at The Ottawa Hospital and the University of Ottawa. “There were no adequate lab models to study how TSC affects the kidney, so we made one ourselves.”

TSC is caused by mutations in the TSC1 or TSC2 gene. For most patients, these mutations arise spontaneously during development or early life rather than being inherited from their parents. This makes TSC a difficult disease to study. While lab researchers often use animals to study human diseases, there was no animal model that fully captured TSC’s impact on the kidneys.

TSC tumors in the kidney have puzzled experts because they are extraordinarily diverse in size, cellular makeup and gene expression, even within the same patient. What causes this diversity was unknown, and it makes treatment challenging.

To better understand the impact of TSCs on the kidneys, the team grew 3-D kidney tissue in the lab from human stem cells that were genetically engineered to have a TSC1 or TSC2 mutation. Known as organoids, these miniature, simplified versions of kidneys had a genetic profile similar to TSC tumors found in patents. The researchers then took single cells from these kidney organoids and injected them into the kidneys of mice, where they grew into human TSC tumors.

Using these organoids, the researchers revealed that cells called Schwann Cell Precursors are where TSC tumors start in the kidney. They also found this single mutation affects the development of many different kinds of cells, which explains the variation in kidney tumors even within the same person.