Breakthrough device that can keep donor livers functioning outside the body for 24 hours will revolutionise transplant surgery, experts say

A life-saving device that can keep the human liver functioning outside the body for 24hours will revolutionise transplant surgery, experts say.

Engineers have praised the OrganOx metra, short-listed for an award, saying it will allow ‘a total change’ in how operations are carried out.

The pioneering gadget allows donor livers to function outside of the human body by mimicking its internal environment.

The device constantly streams warm, oxygen-rich blood through the disembodied liver at pressures that occur in the human body.

This doubles the time the organ can be preserved prior to transplantation, with medics being forced to rely on ice boxes to keep livers ‘fresh’ for the past 40 years.

OrganOx metra also enables transplanting teams to determine the quality of a donor liver before it is transplanted. 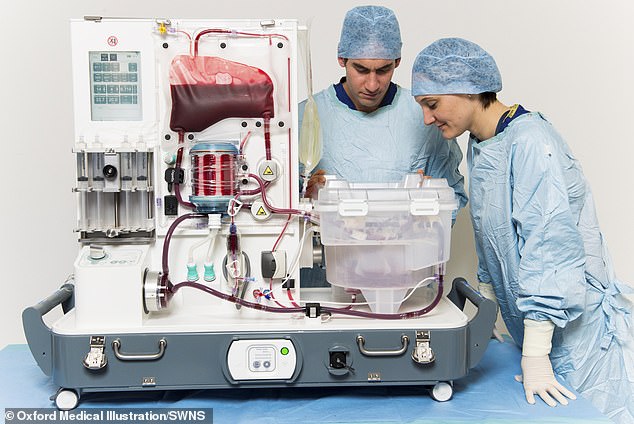 OrganOx metra (pictured) keeps the human liver functioning outside the body for 24hours. The technology mimics the body’s environment by constantly streaming warm, oxygen-rich blood through the organ. This extends how long a donor liver can be preserved for

OrganOx, the Oxford-based company behind the device, is one of four finalists for The Royal Academy of Engineering’s MacRobert Award.

More than 500 patients have received a liver preserved via OrganOx metra to date.

The device is commercially available in Europe, and has been used in Asia, North America and Australia.

‘It involves almost all engineering disciplines, clinical research and the development of new regulatory approvals for what is possibly the most complex bioengineering system on the market.

‘The long-lasting benefit of this development will be a total change in the way we manage transplant surgery and treat, regenerate and recreate organs that are supported outside the body.’

Liver transplants are required when the organ is diseased or damaged to the extent it cannot perform its normal functions, which is known as liver failure or end-stage liver disease.

The liver can become gradually damaged as a result of illness, infection or alcohol.

This causes it to become scarred, which is known as cirrhosis. Inflammation, tissue death and cancer can also result in a transplant being required. 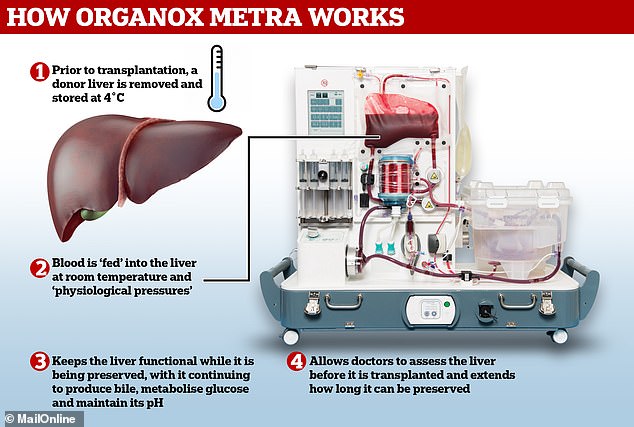 In 2015, 611 patients were on the waiting list for a liver transplant in the UK, NHS England statistics show. Up to 18 per cent die while waiting.

In the US, nearly 17,000 people are waiting for a new liver, according to Columbia University’s Center for Liver Disease and Transplantation.

A donor liver can be removed from a person who has recently died or a section of the organ can be taken from a live donor. This is because the liver can regenerate into a normal-sized organ.

Donor organs are currently preserved via cooling and storage in an ice box.

In contrast, OrganOx metra both ‘cold preserves’ donor livers at 4˚C (39.2°F) via a perfusion solution and ‘warm preserves’ by continuously pumping blood at body temperature through the organ.

This allows the liver to remain functional while being preserved, with it producing bile, metabolising glucose and maintaining its pH. Doctors can then assess the organ’s functionality before it is transplanted.

NHS CHIEF, 69, IS THE FIRST TO RECEIVE A LIVER TRANSPLANT VIA ORGANOX METRA ON THE NHS

A former NHS chief was the first patient to receive a liver transplant via OrganOx metra on the NHS.

Trevor Williams was told his only option was a transplant after being diagnosed with inoperable liver cancer in November last year.

The 69-year-old, of Waterlooville, Hampshire, was due to have a transplant in March, however, the donor organ was deemed unsuitable.

One week later, Mr Williams was matched with a new liver after it was preserved and assessed via OrganOx metra. 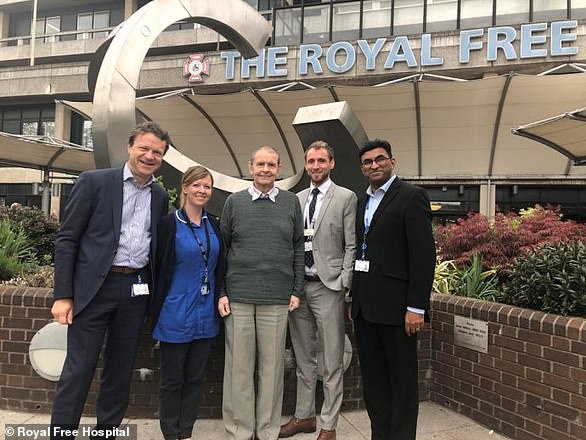 The surgery was a success, with Mr Williams being the first of six such transplants to be carried out at the Royal Free Hospital in Hampstead, London.

Speaking of the technology, Mr Williams’ surgeon Satheesh Iype told The Evening Standard: ‘It is appropriate to use in cases where donor liver quality might be difficult to assess because it simulates the conditions in the body.

‘You can assess functionality before making a decision to transplant.

‘This means we can potentially accept more donor livers that before might not have been judged to be suitable and that means we are likely to perform many more transplants.’

Other MacRobert Award finalists are made up of Bombardier of Belfast for developing an innovative, resin-infused composite aircraft wing that reduces weight and fuel burn in flight, while minimising waste.

Also nominated are Darktrace of Cambridge, whose ‘Antigena’ is an AI powered ‘self-healing’ cybersecurity system that can both identify and neutralise cyberattacks.

And M Squared, of Glasgow, has pioneered the SolsTiS Titanium: Sapphire laser, which produces the world’s purest light, and brings about radical transformations in quantum computing, healthcare, navigation and climate change technology.

First presented in 1969, the MacRobert Award is widely regarded as the most coveted in the industry, honouring the winning organisation with a gold medal and the team behind it with a £50,000 cash prize.

Founded by the MacRobert Trust, the award is presented and run by the Royal Academy of Engineering, with support from the Worshipful Company of Engineers.

Entries were submitted by a wide variety of companies from across the UK to celebrate the MacRobert Award’s 50th year.

Former winners include the CT scanner, invented at EMI in 1972, which allowed doctors to see inside the human body.

And in 2017, the Raspberry Pi – a computer the size of a credit card – took home the honour.

Dr Dame Sue Ion DBE FREng FRS, chair of the Royal Academy of Engineering MacRobert Award judging panel, said: ‘As the MacRobert Award marks its half century, we are excited for the future.

‘Great British engineering innovations, such as those recognised today, benefit not just the UK, but transform lives around the world.

‘This year’s finalists – Bombardier, Darktrace, M Squared and OrganOx, have already proven their potential to shape a greater tomorrow for us all, and they join an illustrious line up of past winners, from the CT scanner to Raspberry Pi.

‘Our four 2019 finalists represent the pinnacle of an engineering sector that contributes 23 per cent of the UK’s economic turnover, creating jobs and enhancing lives both here in the UK and around the world.’