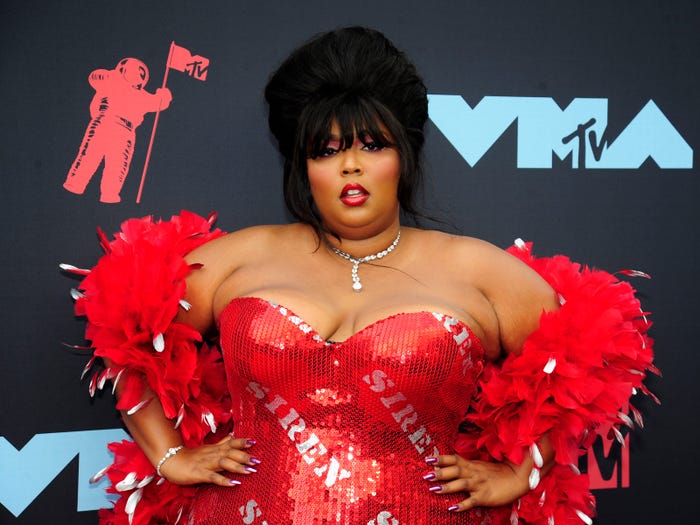 Lizzo is trending on social media again, but not for the body positivity she's typically renowned for.

This time, critics claim that the singer famous for celebrating her body — and encouraging fans to do the same — is promoting diet culture.

The pop star posted a recent video of her 10-day smoothie cleanse.

Some expressed a concern that Lizzo's actions would contribute to pressure on her fans to lose weight with crash diets.

The star said she did the cleanse after a particularly rough month in November, which involved a lot of drinking, spicy food, and other digestive upsets.

In a series of TikTok posts, Lizzo clarified that she tried the smoothie regimen to "reset" her digestion after a rough month in November.

"I feel amazing, and it's great to just reset your stomach, especially when you deal with gastrointestinal issues like I do. But I think I look ****ing great too," she said.

Big girls do whatever u want with your bodies!!! I’m just as proud of my results from my smoothie detox as I am of my belly curves and swerves ❤️

Regardless, Lizzo said, what she does with her body is her business, not anyone else's.

"Every big girl should do whatever the f*** they want with their bodies," she said.

Per Lizzo's initial video on the cleanse, the 10-day program involves a lot of green juice, superfood smoothies, and supplements, but also includes foods like apples, peanut butter, vegetables, nuts, and vegan protein, along with plenty of water.

The cleanse is based on a program from nutritionist J.J. Smith, who wrote a best-selling book on the plan. While the plan does advertise weight and fat loss, it also cites other benefits such as better digestion, more energy, and building good eating habits by avoiding junk food.

According to Lizzo, the smoothie cleanse improved her sleep, her hydration, her mental wellbeing, her skin, as well as her body (although again, without any reference to weight).

The backlash showcases a double standard for people with larger bodies

As an advocate for loving bodies of all sizes, Lizzo has previously been criticized for "promoting obesity." Now, she's being criticized for, as some commenters felt, promoting weight loss.

In her response, Lizzo said this is a double standard that only exists for people with larger bodies in the media and popular culture.

She said would normally feel "afraid and ashamed" to post about things like a smoothie cleanse out of fear that it would be misinterpreted. "I feel like, as a big girl, people just expect that if you are doing something for health, you're doing it for a dramatic weight loss and that is not the case," she said in the TikTok video.

Her experience echoes that of British pop singer Adele, who was alternately praised and condemned for her apparent weight loss in photos posted to social media last spring. Again, the star herself never mentioned her weight, but conjecture swept the internet. (As we learned from the off-the-mark speculation about Chadwick Boseman's weight, it's really best to not comment at all.)

People of color, particularly women, can also face additional scrutiny and criticism. In Lizzo's case, part of the backlash came from white women. One has since apologized for "perpetuating" high standards that Black women are held to.

Assumptions about size and health are deeply rooted in racist history, sociologist Sabrina Strings writes in her book "Fearing the Black Body: The Racial Origins of Fatphobia."

"Black women are framed as a threat to the public health, which is often the case in obesity discourse," Strings previously told Insider.

Online commentators also pointed out the conversation around Lizzo's personal choices suggests that other people feel entitled to her body.

Nutrition experts are typically skeptical of eating plans that claim to offer a "cleanse" or "detox."

"We each have a liver and kidneys to do that job without needing a detox diet that is, in most cases, inadequately balanced and lacking in so many important nutrients," registered dietitian Bonnie Taub Dix previously told Insider.

This can be particularly true for diets and detoxes promising quick weight loss, since they can increase a risk of nutritional deficiencies or disordered eating behavior if they are extremely restrictive.

It's not clear what the exact parameters were of Lizzo's 10-day cleanse. Hers, she says, was done with the help of a nutritionist, and shouldn't be attempted without research and/or a qualified expert.

Lizzo posted an 'all-angles' TikTok video to celebrate the rise of the body positivity movement, and the 'big girls who gave it wings'

The biggest diet myths debunked in 2020, from the alkaline diet to 'loaded' fat loss tea

Lizzo's vegan diet left me groggy and gassy, but I loved her hangover brunch