You’ve cod to be joking! Man, 32, rushed to NHS hospital with sepsis claims he was served three fish fingers and given DIRTY cutlery

A sepsis patient claims he was served a dinner of three fish fingers and given dirty cutlery at an NHS hospital.

Daniel McGuire, from Preston in Lancashire, was rushed to Royal Preston Hospital in August after suffering with pneumonia and sepsis.

The 32-year-old, who spent time in intensive care and a respiratory ward during his month-long stay, claims he was given a plate of ‘three fish fingers’ for dinner on one occasion.

Hospital staff also handed Mr McGuire cutlery which, he claimed, had ‘someone else’s custard on it’.

Mr McGuire, who is currently unemployed, said he was also given a meal that was half a curry and half a hot pot after the hospital ‘ran out of food’. He also witnessed another patient being handed a dinner of ‘just rice’.

Mr McGuire, who lost two to three stone during his time in hospital, said staff were left ‘laughing in disbelief’ at his dinner but any complaint would ‘fall on deaf ears’.

Lancashire Teaching Hospitals NHS Foundation Trust, which manages the hospital, admitted that ‘a lack of communication’ between staff led to the mealtime mix-up. 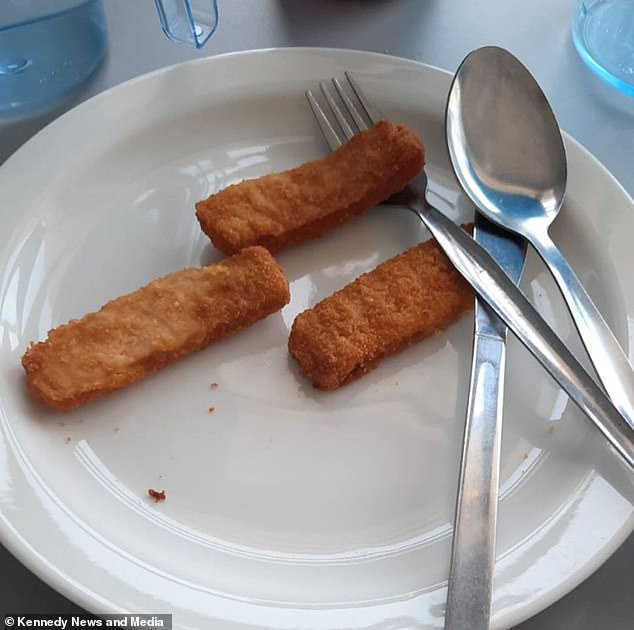 The 32-year-old, who spent time in intensive care and a respiratory ward, claims he was given a plate of ‘three fish fingers’ for dinner on one occasion (pictured) 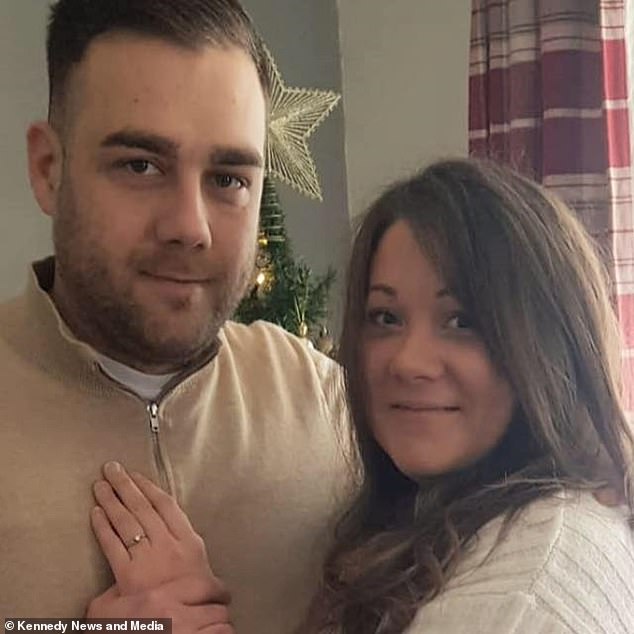 Daniel McGuire (pictured with partner Sarah Howden), from Preston in Lancashire, was rushed to Royal Preston Hospital in August after suffering with pneumonia and sepsis 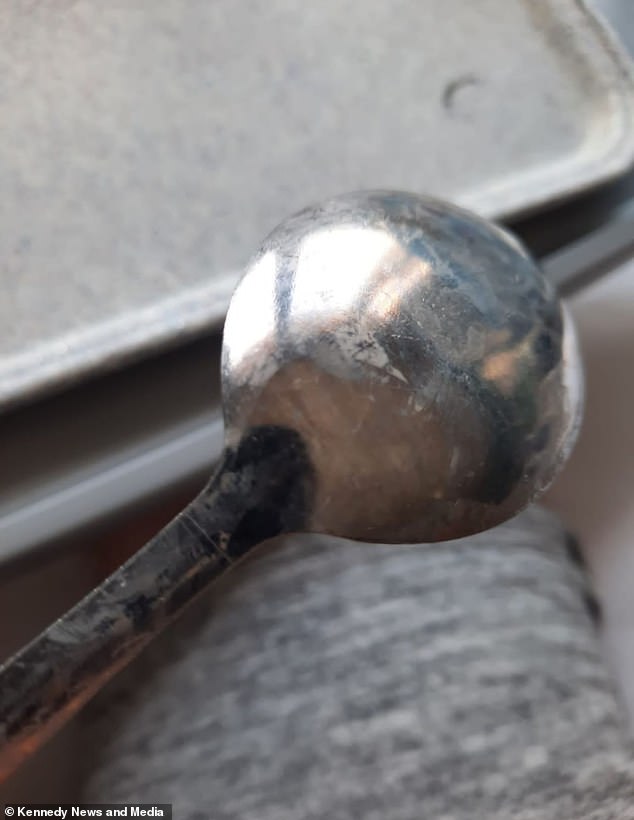 Hospital staff also handed Mr McGuire cutlery which he said had ‘someone else’s custard on it’ (pictured, what he claims is a dirty spoon)

Hospitals have been told to serve up fewer chips in a crackdown on the dreary meals patients have complained about for decades.

The biggest ever overhaul of internal catering will also see patients given food on proper plates as part of green drive to stamp out single-use plastic.

It comes in the wake of a review of hospital food by cook and Great British Bake Off judge Dame Prue Leith two years ago, who called on the NHS to make healthier and better quality meals, let patients order food around the clock straight to their bed and serve up dishes on china .

Experts welcomed the NHS’s new standards, which are legally binding, labelling it a ‘great step forward’ in killing the ‘hotel service’ which sees meals delivered at the ‘lowest cost’.

But they warned options on offer must taste good because a ‘healthy meal that is not eaten doesn’t really benefit anyone’.

The new NHS national standards for food and drink, an update on ones set out almost a decade ago, set out that all trusts should view ‘food as medicine’ and that managers should be ‘held accountable’ for the food served in their organisation.

It noted that ‘many’ hospitals already provide ‘high quality food and drink’ to their patients, staff and visitors ‘but the variation across the country is still too great’.

‘Not enough healthy options are consistently available, sustainability is poorly embedded and too much food is wasted,’ the report states.

Hospitals, which will be monitored to ensure they comply with the food rules, must offer food around the clock, which is ‘appropriate for their demographic’.

Mr McGuire went to see his GP over the summer after becoming ‘really sick’. His doctor thought he had an appendicitis, which triggers a painful swelling in the abdomen, which gets worse with talking and coughing.

He was rushed into hospital, where scans revealed he had sepsis (the body’s over-reaction to an infection) and pneumonia, which is swelling of the tissue in one or both lungs, as well as empyema — pockets of pus inside the body.

Mr McGuire said doctors told him he was lucky not to have died at home, as his condition was apparently so severe.

He spent a month in hospital, including one week in intensive care after his oxygen levels dropped and he was struggling to breathe. He lost one stone (6kg) that week alone.

Despite warnings from doctors to eat to aide his recovery, he went on to lose another one to two stone (6kg to 12kg) while back on the respiratory ward — suggesting a lack of food was to blame.

Mr McGuire said: ‘There was one night I was waiting for my tea. The guy brought it over and he was laughing.

‘He said “I’m sorry but this is your tea”. There were just three fish fingers stone-cold on the plate.

‘I think he was in disbelief himself. He didn’t really know what to say to me.

‘There’d been a mess up with the menu. They’d either lost the menus or whatever. They’d basically run out of food.’

He added: ‘I’d been given dirty cutlery with someone else’s custard still on the spoons.

‘I complained there and then about the dirty cutlery and got told “oh well it happens”. I think that was one of the assistants that fill up your water and that sort of stuff.’

He said his partner, Sarah Howden, 35, was forced to smuggle in food or he would have gone all day without eating.

Mr McGuire said: ‘One day I got a curry with hotpot as well. They’d done it quite a few times and didn’t have enough food.

‘If they didn’t have enough food that’s what you got. Someone got just rice [on one occasion].’

He added: ‘There’s no point putting in a complaint. It’ll fall on deaf ears.’

After a picture of the meal was shared on social media, one Twitter user branded it ‘disgusting’ and urged an investigation.

The woman wrote: ‘How disgusting is this food in @LancsHospitals? Prisoners get better fed!

‘[The Food Standards Agency (FSA)] need to investigate what food they are serving to patients in this hospital.’

The FSA said the remit of the complaint came under Department of Health and Social Care, who have been contacted for comment.

A Lancashire Teaching Hospitals spokesperson said: ‘The Trust produces around 80,000 meals per month with inpatients able to select a wholesome meal from a menu in advance, and we take hygiene standards very seriously.

‘The system works well for the vast majority of the time and most patients receive the meal they have ordered.

‘Occasionally there is mix up in the order due to a lack of communication between the ward and the catering team, as was the case here. We understand that this was resolved locally at the time.

‘Where a patient feels that their concern has not been dealt with, we would always encourage them to contact our Patient Experience and PALS (Patient Advice and Liaison Service) team to investigate and identify any future learning.’