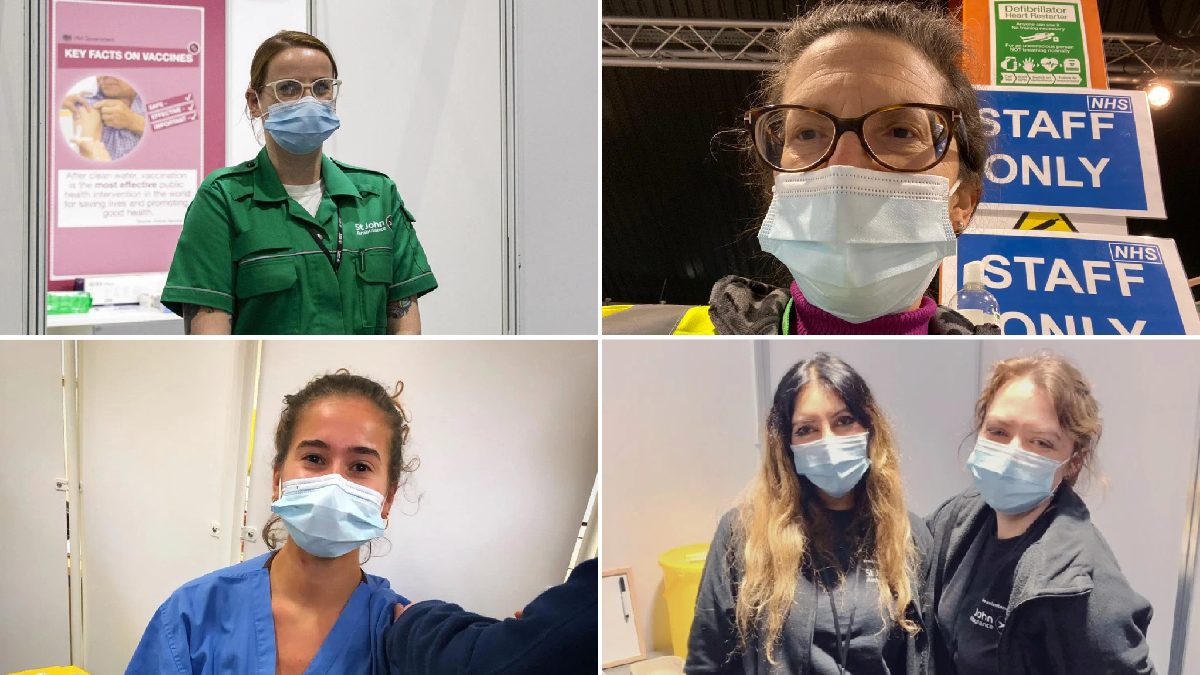 The vaccination effort has undoubtedly been one of the UK’s greatest successes.

Against the odds, we’re on course to offer first doses to every adult before the end of July.

When you turn up at the vaccine centre, you might assume that the person taking your name, the person telling you where to sanitise your hands, the person actually giving the vaccine and the person keeping an eye on you once it is all done, are all being paid.

In reality, many people with no medical experience have given up hours of their time to make sure the operation runs smoothly.

The call for volunteers was so successful, the NHS had to suspend recruitment as they already had more than enough.

Many joined through St John Ambulance, who now estimate more than 330,000 volunteering hours have been put into the effort to date.

Over 30,000 people have been trained by the charity to help the operation, including actually giving vaccinations, after the government revised the Human Medicines Regulations to allow more people to be trained to give the jabs.

Lucy Aerts, 37, from London, was already volunteering with St John Ambulance when the call for vaccinators went out.

She tells Metro.co.uk: ‘When the opportunity came to become a vaccinator I immediately applied. I have the NHS to thank for my life and they have saved and continue to treat many of my friends.

‘To see them being under so much pressure during the pandemic was heartbreaking. Hopefully by volunteering as a vaccinator I would be able to contribute towards a bit of normality again.’

After around 10 hours of NHS online training and one day of face-to-face training, Lucy was ready to start giving vaccinations.

For her first shift on January 11, she was observed by a healthcare professional, but didn’t find out until later she was actually the first volunteer to vaccinate a citizen.

She now volunteers as a vaccinator on Saturdays and as a shift lead every Thursday, helping settle new volunteers into their roles. Usually, she works from 8am to 4pm, seeing around 50 people each day.

Lucy says she’ll keep volunteering for as long as she’s needed and over the last six months, she’s made some amazing memories.

She says: ‘In the first cohort and weeks we had some incredible people in. What sticks with me most is the elderly people who came in all dressed up, just wanting a chat as often you where the first contact they had in just under a year.

‘I have had people burting into tears on me as they felt they where given some freedom back. I cried when I received my second jab on my dads anniversary as this felt it was a step back to visiting my family in the Netherlands.’

Others became volunteers because they were already in a medical line of work.

Ally Jaffee, 25, originally from London, had just finished her medical degree at the University of Bristol, which included working on a Covid ICU ward.

When the GP surgery she was working at needed some extra hands to give out the vaccines, she knew she wanted to help.

Ally explains: ‘I had witnessed all the tragedy in the Covid ICU in January and knew I wanted to witness something positive in relation to the pandemic, so being part of and helping with a vaccination programme seemed to be the perfect answer.

‘I was lucky enough to do arrange my own GP placement back home in North London as part of finishing off my primary care requirements for medical school. This GP Practice was the vaccine centre for the area, so it was a brilliant opportunity to easily get involved. I automatically became a volunteer by shadowing the GP at the practice.’

Her duties involved helping with admin, greeting and helping people on the day, and giving some vaccinations herself.

She says: ‘I was blown away by a 106-year-old coming to have her second vaccine. I spoke with her and her carer and she was so grateful. It was amazing to witness.

‘It was also so fulfilling to hear so may thank yous come out of so many different people’s mouths, from all walks of life.

‘The gratitude and positive atmosphere at the vaccine centre was palpable.’

Volunteering has given a purpose to some who are furloughed or have had to close their business during the pandemic, like Shazia Saleem, 43, London, who runs a fashion boutique.

‘I made a video for social media at the start of the pandemic in March 2020 just before my fashion boutique closed,’ Shazia tells us. ‘We were coming up for Mother’s Day weekend so I decided to give away 10 silk scarves to any mums to boost their mood as the nervousness and dread was starting to sink in.

‘In the video I mentioned feeling helpless as I wasn’t medically trained to help more. Following this my fashion boutique was closed due to it being “non-essential”.

‘Once the vaccine had been developed later that year and I started hearing about the call for volunteers to assist the vaccination drive and registered to help.

‘I was a little bit nervous as I hadn’t caught the virus but I felt that as a healthy adult with no underlying vulnerabilities I was in a good position to help – and so I did.’

She signed up with St John Ambulance but had to undergo more training than Lucy as she had never worked with the charity before.

Shazia adds: ‘The process with St John Ambulance was fantastic, the training was understandably quite intense.

‘The training was like a mini diploma combining training from SJA and the NHS. The training was varied and covered the two vaccines we would be administering, the research and science behind them so that we could answer questions. We also did first aid training and many more assessments, like how to administer the vaccine.

‘To be honest I hadn’t taken notes like that since I left university. The pass mark was 80% for each assessment and that really made me focus. We weren’t able to do the in-person training until we passed all the assessments. The training process and assessments gave me a lot of confidence for the role.’

With her boutique closed throughout lockdown, Shazia did as many shifts as possible. Now her business has re-opened, she’s still trying to do shifts when she can as she enjoyed the experience so much.

She says: ‘Members of the public were so grateful for their vaccine and I was able to help out.’

The behind the scenes support from volunteers has been just as important for the vaccine effort and Danielle Benson, 58, from Barnet, does everything from car park marshalling to hand sanitising.

When the Harrow East Primary Care Network were seeking volunteers, the Rotary Club of Edgware & Stanmore, where Danielle is a member, were keen to get involved, particularly as the organisation has a history of being involved with the eradication of polio – another disease wiped out by vaccination.

The PCN oversaw The Hive, one of the first big vaccination centres to launch, on December 15 2020 at Barnet Football Club.

Danielle says: ‘We all had to hit the ground running, to support the clinical teams. It was cold and raining, with glasses steaming up (in my case) behind mask and shield.

‘The volunteer co-ordinator, Anna Donovan, was amazing at leading us and quickly assessing what each of us would feel comfortable doing. Many of us are still volunteers at the new venue in Harrow, where the Hive volunteers team now work along-side volunteer teams of two other centres under one roof: Byron Hall and Tithe Farm.’

Danielle was involved around twice a week since then, recently cutting back to once a week with her business picking up.

‘Being a fair weather only car park marshal, on the whole, I work on the inside, guiding people to the waiting area from reception and then to the vaccination station,’ she says. ‘We make them feel comfortable, chatting at times, depending how busy it is. Other duties are outside – form-filling organising and checking, in reception, hand sanitizing and keeping an eye out in the observation area.’

Danielle has dealt with everything from people collapsing, walking out, and even trying to gate crash the system and being escorted out.

She adds: ‘We even had a security camera fitted to the front desk, due to difficult customers.’

Despite some difficult moments, Danielle says seeing everyone coming together for something so important has been incredible.

‘The diversity of the people who work together, and the camaraderie, is completely heartwarming,’ she tells us.

‘It’s amazing how people of different walks of life can just gel and get on with the job in hand, rather as I would imagine happens when there are war time measures.

‘Whether a vaccinator, part of the clinical team, in admin or a volunteer marshal, a light-hearted spirit since day one has ensured seamless team work in ever-changing circumstances.’

Although most volunteers make a commitment, availability has ebbed and flowed, particularly with people going back to work, so there are still new volunteers coming on board all the time.

Nicola Alvey, 44, from Maidenhead, had her first session just a few weeks ago but after just one shift, she already feels inspired by the experience.

‘Volunteering is part of my family’s culture,’ she says. ‘My mum was always volunteering for different charities and foodbanks and even went out to Romania to renovate an orphanage (after watching Challenge Anneka) while I was growing up.

‘Her father and grandfather were also members and volunteers at St John’s Ambulance and I’ve been a member of Ladies’ Circle (a national association for young women where we volunteer, fundraise and socialise) for many years. It’s just something we do! Making a difference is a wonderful feeling.

‘In addition, my father passed away in January after catching Covid-19 while in hospital and this really spurred me on to get my training underway.

‘I know he would have been really proud of me today – and so would my mum, grandad and great grandfather. It feels great to be involved in the vaccination programme.

‘The first session was just brilliant, the NHS and St John’s team were so welcoming and those being vaccinated were incredibly grateful.

‘One person said: “Thank you for saving the world” – I must admit I really welled up at that.’

Volunteers’ Week takes place 1-7 June and highlights the amazing ways people can give back and help others. To get involved click here.