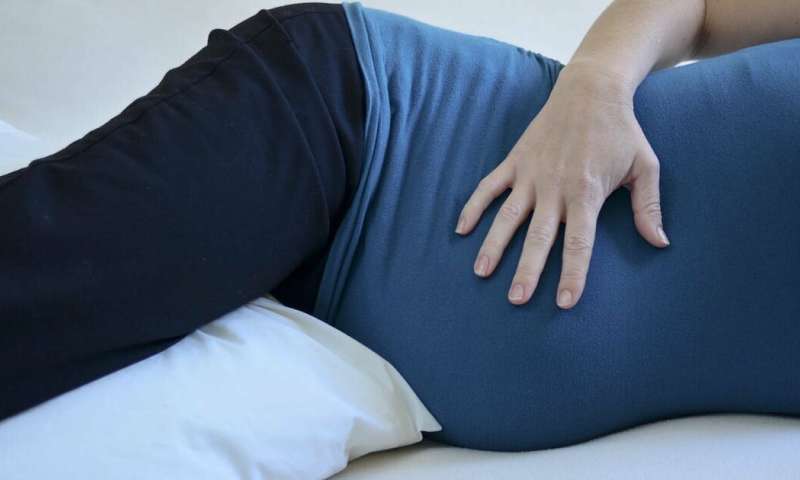 A New Zealand-led international study published today provides the strongest evidence yet that women can more than halve their risk of stillbirth by going to sleep on either side during the last three months of pregnancy.

This mega study (known as individual participant data meta-analysis) has also confirmed the risk of stillbirth associated with sleeping on the back applies to all pregnant women in the last trimester of pregnancy.

We have analysed all available data worldwide from five previous studies, including our earlier research, the 2011 Auckland Stillbirth Study, which first identified a link between mothers’ sleeping position and stillbirth risk. The main finding in the mega study, which included information from 851 bereaved mothers and 2,257 women with ongoing pregnancies, was that going to sleep lying on the back (supine) from 28 weeks of pregnancy increased the risk of stillbirth 2.6 times.

This heightened risk occurred regardless of the other known risk factors for stillbirth. However, the risk is additive, meaning that going to sleep on the back adds to other stillbirth risk factors, for example, a baby who is growing poorly in the womb.

Existing common risk factors for late stillbirth are not easily modifiable. They include advanced maternal age (over 40), obesity, continued cigarette smoking and an unborn baby that is growing poorly, especially if the poor growth is not recognised before birth. Women also have a higher risk during their first pregnancy, or if they have already had three or more babies. Women of Pacific and South Asian ethnicity also have an elevated risk of late stillbirth, compared with European women.

If modifiable risk factors can be identified, some of these baby deaths could be prevented. Importantly, our mega study has shown that if every pregnant woman went to sleep lying on her side after 28 weeks of pregnancy, approximately 6% of late stillbirths could be prevented. This could save the lives of about 153,000 babies each year worldwide.

The relationship between the mother going to sleep lying on her back and stillbirth is biologically plausible. A supine position in late pregnancy is associated with reduced blood flow to the womb. Hence, women in labour and women having a caesarean section are routinely tilted onto their side to improve blood supply to the baby.

Recent research carried out at the University of Auckland has provided sophisticated evidence about how the mothers’ position influences blood flow. Results obtained using Magnetic Resonance Imaging (MRI) demonstrate the major vessel in the mother’s abdomen, the inferior vena cava, being compressed by the pregnant womb when she is lying on her back. This reduces flow through this vessel by 80%.

Although the mother’s circulation responds by increasing the flow through other veins, this does not fully compensate. The mother’s aorta, the main artery which carries oxygen-rich blood from her heart, is also partly compressed when the mother lies on her back. This decreases blood flow to the pregnant uterus, placenta and baby.

We speculate that while healthy unborn babies can compensate for the reduced blood supply, babies that are unwell or vulnerable for some other reason may not cope. For example, our mega study showed that the risk of stillbirth after 28 weeks of pregnancy is increased approximately 16 times if a mother goes to sleep lying on her back and also is pregnant with a very small baby.

New Zealand research has shown that pregnant women can change their sleeping position. In a recent survey conducted in pregnant women from south Auckland, a community that has a high rate of stillbirth, more than 80% of women surveyed stated that they could change the position they went to sleep in with little difficulty if it was best for their baby.