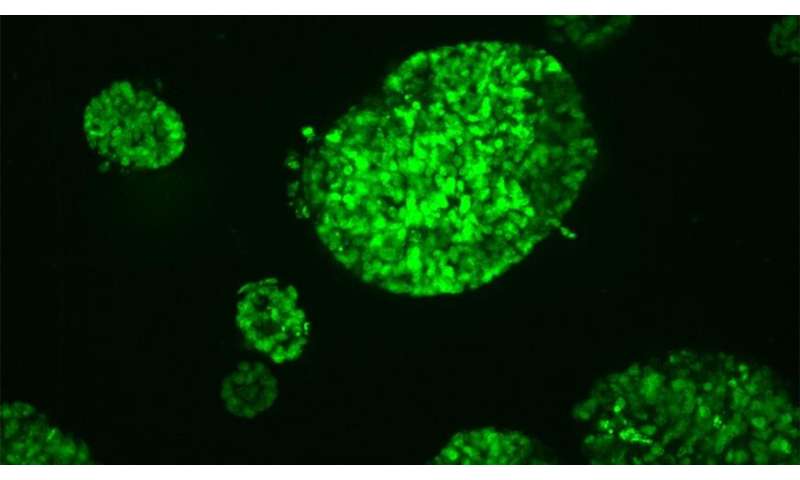 Scientists have shown that therapies which combine heat and radiation have a different effect on lab-grown mini tumors than they do on lab-grown cancer cells grown in a more traditional way in a two-dimensional layer.

In a new study, scientists at The Institute of Cancer Research, London, tested the effects of a combination of hyperthermia and radiation on mini tumors grown in what’s called a spheroid—where cells are packed in a 3-D structure, much like a small ball.

Cells at the center of the ball have less access to oxygen and nutrients compared to those on the outside, and this closely mimics tumors in the real world.

Scientists are exploring the potential of combining hyperthermia and radiation because heating could make cells become more vulnerable to standard radiation treatments given for cancer.

It is thought that the application of heat increases the blood circulation to the cancer cells, thereby increasing the amount of oxygen available to them, which in turn could make the cells easier to kill with radiation.

ICR is a pioneer in use of mini-tumors

In a series of experiments, the researchers exposed mini tumors to 47 degrees C, radiation, and a combination of both. They repeated these treatments for standard cancer cells grown in dishes in the lab to allow them to compare the effects of the treatments between the two.

They found that cells in the mini tumors are more resistant to heat than standard lab-grown cancer cells. It was also found that in some cases, following heat treatment, cells in mini tumors were inclined to grow at a faster rate.

This may be because changes in the environment around the tumor made more oxygen available to the center of the mini tumor, leading to increased growth.

Based on these results, the scientists believe more work is needed to calculate what the best ‘fractions,” or doses, of radiotherapy given to patients in combination with heat treatment could be. This work should be more closely based on data from experiments with mini tumors rather than that from layers of cells.

The ICR has pioneered the use of mini tumors, now in use in many labs, which more closely model the growth of a real tumor than two-dimensional cell cultures and also help limit the use of animals in research.

“We have been at the forefront of developing this treatment path’

“The main aim of our study was to assess the response of tumor spheroids to hyperthermia, radiation, and a combination of the two treatments, and to see if the results were able to give us an accurate picture of how sensitive the cancer cells are to radiation after heat treatment.

“Heat-based treatments are effective at rapidly killing tissues when delivered via high intensity therapeutic ultrasound, and we have been at the forefront of developing this treatment path.

“In this study we were looking specifically at the ability of heat to make cells more susceptible to treatment with radiation, and it looks like further work is needed to improve this in the clinic.”

“Adding rapid heating of tumors to radiotherapy could make it more effective in some circumstances, through making cells more vulnerable to radiation treatment.