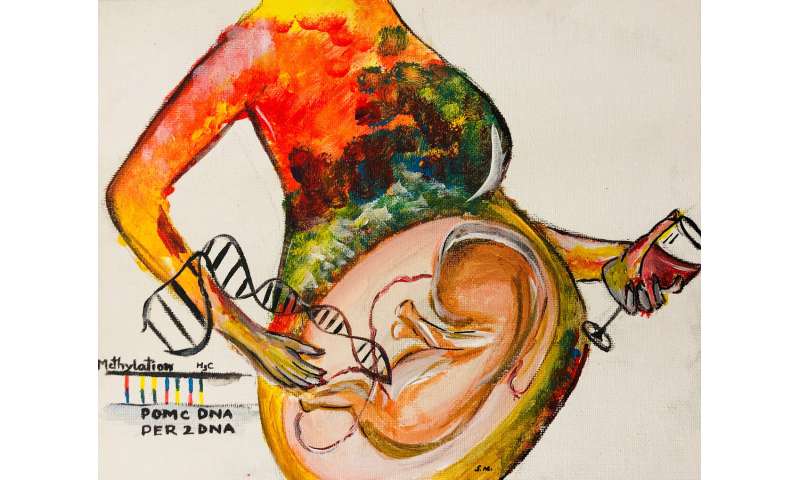 Mothers who drink moderate to high levels of alcohol during pregnancy may be changing their babies’ DNA, according to a Rutgers-led study.

“Our findings may make it easier to test children for prenatal alcohol exposure—and enable early diagnosis and intervention that can help improve the children’s lives,” said lead author Dipak K. Sarkar, a Distinguished Professor and director of the Endocrine Program in the Department of Animal Sciences at Rutgers University-New Brunswick.

The study by Sarkar and scientists in a Collaborative Initiative on Fetal Alcohol Spectrum Disorders is in the journal Alcoholism: Clinical and Experimental Research.

Building on an earlier Rutgers-led study that found binge and heavy drinking may trigger long-lasting genetic change in adults, the researchers sought alcohol-induced DNA changes in 30 pregnant women and 359 children.

They found changes to two genes—POMC, which regulates the stress-response system, and PER2, which influences the body’s biological clock—in women who drank moderate to high levels of alcohol during pregnancy and in children who had been exposed to those levels of alcohol in the womb.

“Our research may help scientists identify biomarkers—measurable indicators such as altered genes or proteins—that predict the risks from prenatal alcohol exposure,” Sarkar said.

Fetal alcohol spectrum disorders can include physical or intellectual disabilities as well as behavioral and learning problems. While there is no cure, early intervention treatment services can improve a child’s development, according to the U.S. Centers for Disease Control and Prevention, which says there is no known safe amount of alcohol to drink while pregnant.