How I faced pregnancy after losing my first-born at two days old: Mother, 28, whose son was born with untreatable heart condition describes finding out she was expecting again months later

When Caitlin Merrill first found out that she and her husband Tony were expecting a baby in July 2017, she was elated.

The pregnancy went well for the first three months, until a scan at their doctor’s office in Clayton, North Carolina, revealed their unborn son’s heart was underdeveloped.

The couple was told surgery after birth could correct the problem, until doctors reviewed a scan at 34 weeks and deemed their son’s heart too weak and that he wouldn’t survive surgery.

Caitlin was induced at 38 weeks and little Thaxton was born in February 2018, only living two days before he passed away.

Despite dealing with the heartbreak of losing her first child, Caitlin was shocked to find out less than a year later that she was pregnant again.

She says she feels many people don’t know how to speak to her and avoid discussing Thaxton with her – and hopes that speaking openly about infant loss will help break the stigma. 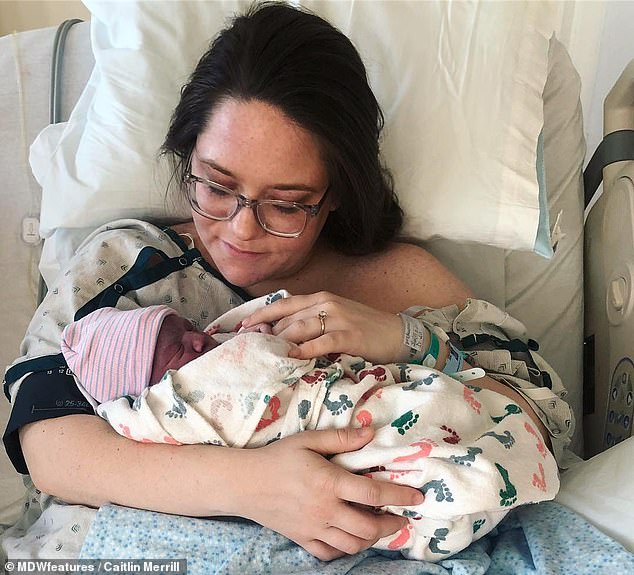 Caitlin Merrill, 28, from Clayton, North Carolina, learned she and her husband Tony were expecting in July 2017. She said the first trimester of her pregnancy went smoothly. Pictured: Caitlin holding Thaxton shortly after his birth 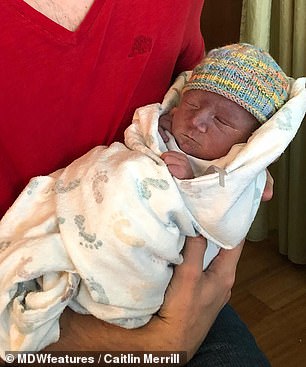 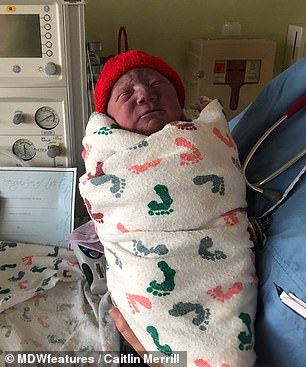 In October 2017, the couple learned their unborn son had hypoplastic left heart syndrome. This is a birth defect in which the left side of the heart does not from correctly and makes it difficult for blood to throw through his body properly. Pictured: Thaxton being held by his father, left, and by a nurse, right

Caitlin said when she discovered she was expecting, she and Tony, who was then her partner, weren’t trying to get pregnant.

‘I went to urgent care before work and my doctor was concerned about my low-grade fever,’ she said.

‘She asked about my cycle and then gave me a pregnancy test, which came back positive. My now-husband was also working that day, so I had to wait until we both got home from work to spill the beans.’

For the first trimester, Caitlin said she suffered no morning sickness or fatigue.

In October 2017, when the couple when in for an anatomy scan, the doctor told them their son had hypoplastic left heart syndrome, a birth defect in which the left side of the heart does not from correctly while the baby is in the womb.

Because the left side of the heart is unable to pump oxygen-rich blood throughout the body, the right side is responsible for pumping blood to both lungs and the rest of the body.

According to the Centers for Disease Control and Prevention, about 960 babies are born in the US every year with this defect.

Sufferers may need to take medications to lower blood pressure and strengthen the heart muscles for the rest of their lives.

Surgery is another option to help restore heart function by increasing blood flow throughout the body. 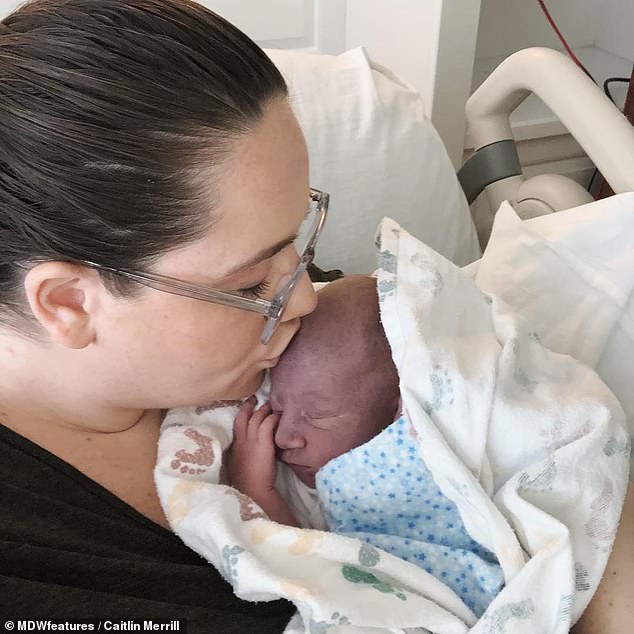 Surgeons originally told Caitlin and Tony that surgery performed after birth could fix Thaxton’s heart condition. However, at 34 weeks, they said his heart was too weak and he wouldn’t survive an operation. Pictured: Caitlin holding Thaxton after his birth 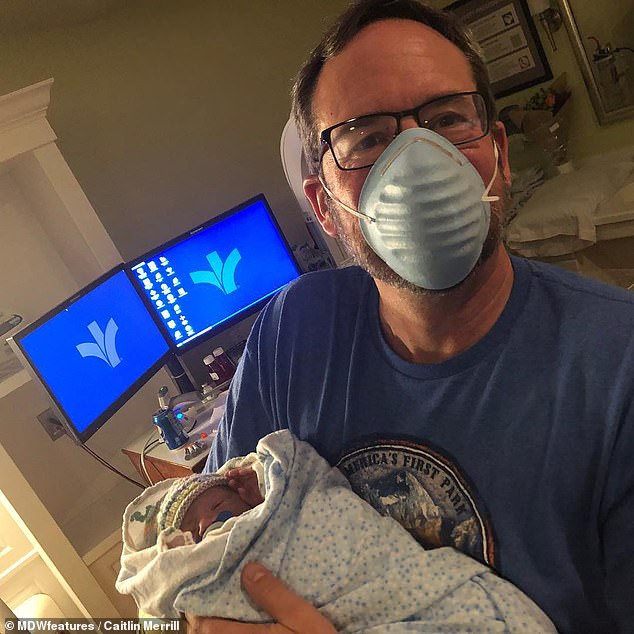 Caitlin was induced at 38 weeks and Thaxton was born in February 2018. At first, his vital signs seemed positive, but he passed away two days later. Pictured: Tony holding Thaxton

‘I was scared for my baby and disappointed, like I’d failed in providing him everything I could have for him to have a healthy body,’ Merrill said.

‘We were immediately told about the surgical options available, so that was the route we chose.’

For the next 14 weeks, Caitlin and Tony believed their son, whom by then they had named Thaxton, would have surgery after he was born.

However, at the 34-week check-up, the surgical team deemed Thaxton inoperable because the condition of his heart had rapidly deteriorated.

‘He would never survive the first surgery,’ said Caitlin. ‘The medical staff refused to operate on him knowing he would suffer and not survive, so Thaxton was born into palliative care.

Caitlin was induced at 38 weeks. Doctors monitoring her labor told her that Thaxton’s heart had become more stressed and warned that he may not survive the delivery.

However, on February 22, 2018, Thaxton was born. Caitlin and Tony spent the next two days in hospital, while she and the newborn were closely monitored. 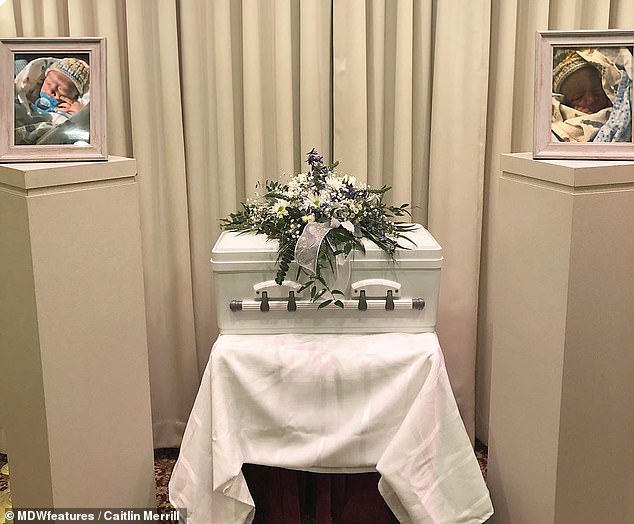 Despite the heartbreak of losing their first child, Caitlin and Tony found out  they were expecting again less than a year later, this time a healthy daughter. Pictured: Thaxton’s casket at his funeral 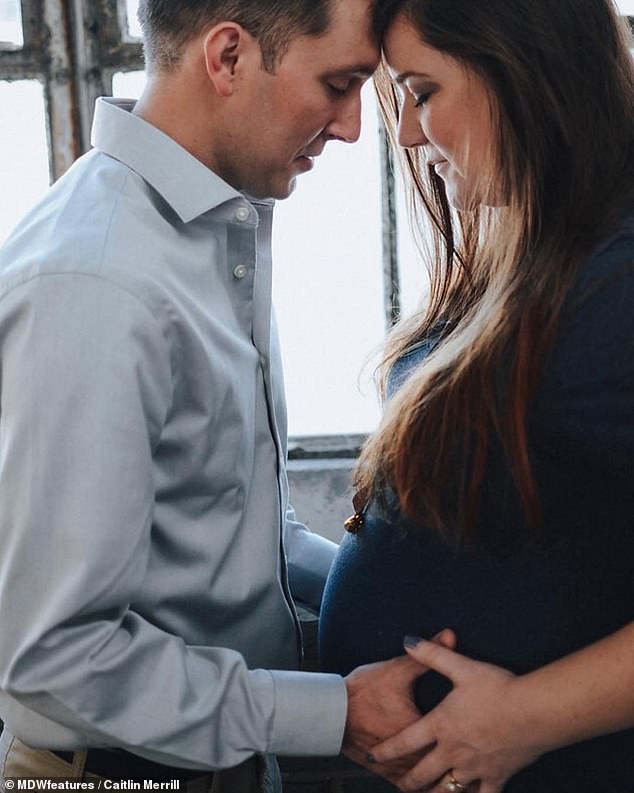 Caitlin says many people avoid speaking about Thaxton with her – and hopes that speaking openly about infant loss will help break the stigma. Pictured: Tony and Caitlin share a touching moment in the weeks before she gave birth

Thaxton was born a bluish color, in part due to his heart condition. But his vital signs seemed positive and Caitlin hoped that her son would defy the odds to get better.

However, two days later, his heart rate began to slow down in his sleep and, when the family alerted nurses, they confirmed that Thaxton was passing.

‘For me, it was oddly peaceful in a way, but still devastating,’ Caitlin said. ‘I was so afraid he was going to suffer, but he was able to pass in his sleep.’

Eight months after Thaxton passed away, Caitlin found out she was pregnant again, which left her with excitement and a huge sense of fear.

‘I was totally not expecting to become pregnant again, especially so soon,’ she said.

‘Babies are three times more likely to have congenital heart disease if a parent or sibling has it, so I was so stressed for the anatomy scan.’

In February 2019, the ultrasound technician told the couple they were expecting a daughter, with a healthy, four-chambered heart, which relieved the pair.

Caitlin said many people she meets are still very careful when speaking with her due to Thaxton’s passing and she hopes to break that stigma.

‘Even though my baby passed away, I’m not contagious. I still want to be checked in on and involved in other people’s lives,’ she said.

‘I want to know that you remember my baby because Thaxton will always be a part of our family, even if he’s not physically with us.’