A mother-of-two ditched the vegan diet she followed for fifteen years after she claims it caused her immune system to crash – and now only eats meat.

Nicole Carter, 44, from California, went vegan when she was 18 thinking it was the best thing to do for her health and to protect the environment.

Her diet was packed with whole foods, leafy greens, berries and freshly squeezed juices. She grew her own vegetables and cut out sugar and alcohol.

She was eventually diagnosed with ulcerative colitis in September 2012, a painful condition in which the bowels are inflamed.

Then, a year ago, Ms Carter came across the carnivore diet after reading positive ways it had improved others’ health.

Since switching to a diet of a pound-and-a-half (468 grams) of red meat a day, Ms Carter said her ulcerative colitis symptoms have been relieved, and she has gone from 9st 4lb (59kg) when she was vegan to 8st 6lb (54kg).

Ms Carter believed she was malnourished as a vegan – but experts generally warn a high-meat and low-vegetable diet lacks vital vitamins and minerals and is linked to cancers, digestive problems and heart disease. 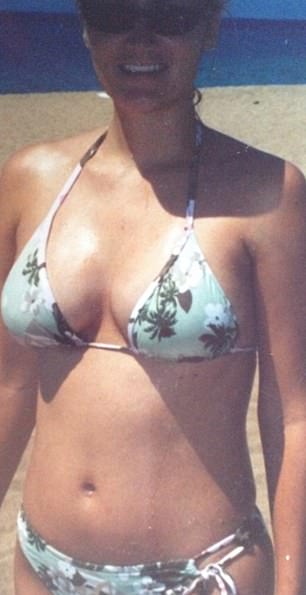 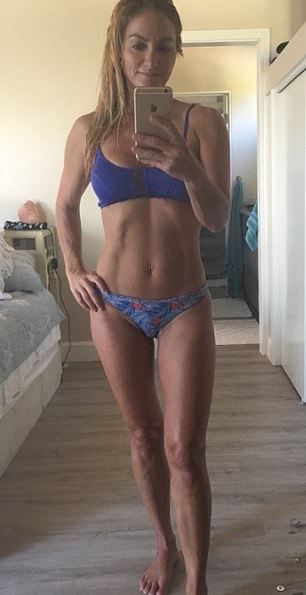 Nicole Carter, 44, ditched the vegan diet she followed for fifteen years after she claims it caused her immune system to crash, and now only eats meat. Her weight dropped by 5kg and she claims her energy improved immediately 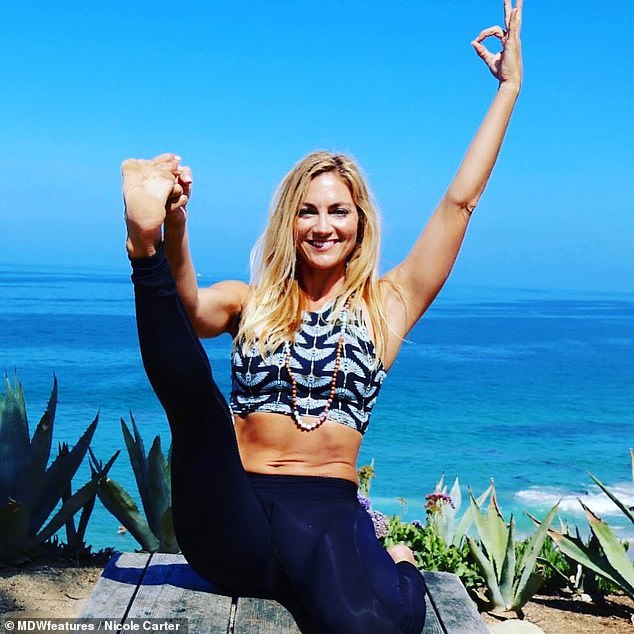 Since switching to a diet of a pound-and-a-half (468 grams) of red meat a day, Ms Carter, pictured recently, claims she noticed an improvement in her energy and her digestive condition ulcerative colitis – which was diagnosed in 2012 – has gone 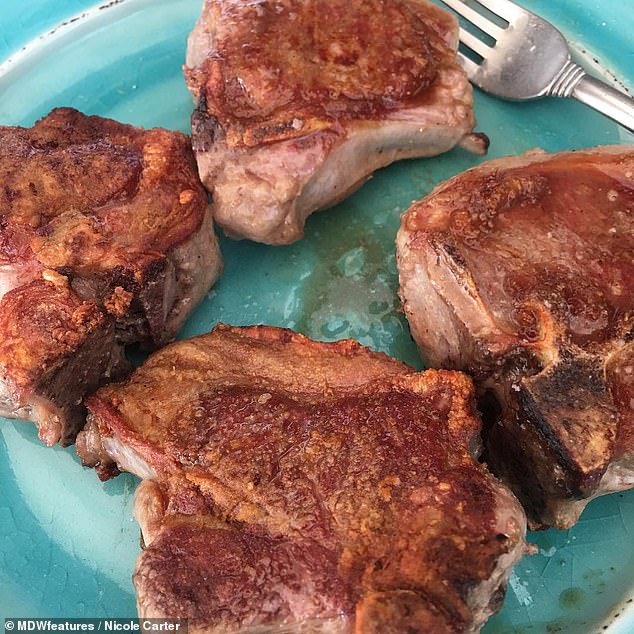 A year ago, Ms Carter came across the carnivore diet after reading positive ways it had improved others’ health, so she decided to give it a go. Pictured, a typical meal 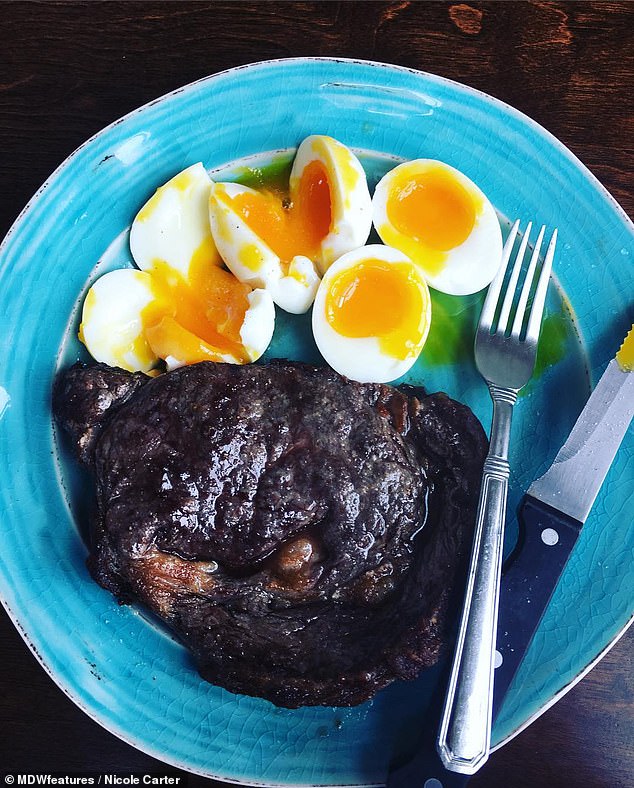 Ms Cater has a pound of meat for lunch, followed by half a pound for dinner, sometimes adding bacon and eggs

Speaking of her days as a vegan, Ms Carter, who works as a health coach, said: ‘I felt good at first, then very tired. My immune system crashed and my hormones were not functioning properly and I had all sorts of health problems.

‘I no longer have any of the annoying symptoms or problems I had before. My autoimmune disease is gone and I am so grateful for what I have learned that got me here.

She said: ‘I avoided wheat, I never ate sugar and I didn’t drink alcohol’.

Lunch – 1lb of meat, usually steak (she has this at 12 and it’s her first proper meal of the day)

Dinner – half a pound of meat which she occasionally adds in eggs and bacon.

Drinks water, coffee and sparkling water throughout the day.

Ms Carter had gall stones and pancreatitis which led to gall bladder removal in 2006.

She added: ‘I had chronic constipation, gas, bloating and eventually ulcerative colitis. I was hypoglycaemic.

‘I had insomnia at night and no energy all day – I didn’t drink coffee, only organic green tea. I was depressed, had anxiety and felt lost as to how to improve my health.’

Desperate, Ms Carter tried everything to try to improve her health and took natural supplements to give herself a boost – but nothing worked.

Although a specific diet is not thought to play a role in causing ulcerative colitis, some people with the condition identify triggers of a flare-up.

She read about someone called Amber O’Hearn who followed the carnivore diet for a mood disorder.

‘I was curious if it would cure my autoimmune disease, ulcerative colitis,’ Ms Carter said.

‘It is the elimination of all plant and non-animal foods. There are varying degrees, but most carnivores focus on beef and ruminant animals and add in pork, chicken, fish, eggs and dairy to some degree.’

It was a stark contrast from what Ms Carter was used to. Before, she would start her day with a green spinach smoothie with almond milk and then eat salad or steamed vegetables for the rest of the day.

She added: ‘I soaked and sprouted all my legumes, nuts and seeds. I roasted my sweet potatoes, rinsed my quinoa to remove saponins. I made dehydrated crackers out of flaxseeds, my own veggie burgers and nut milks. 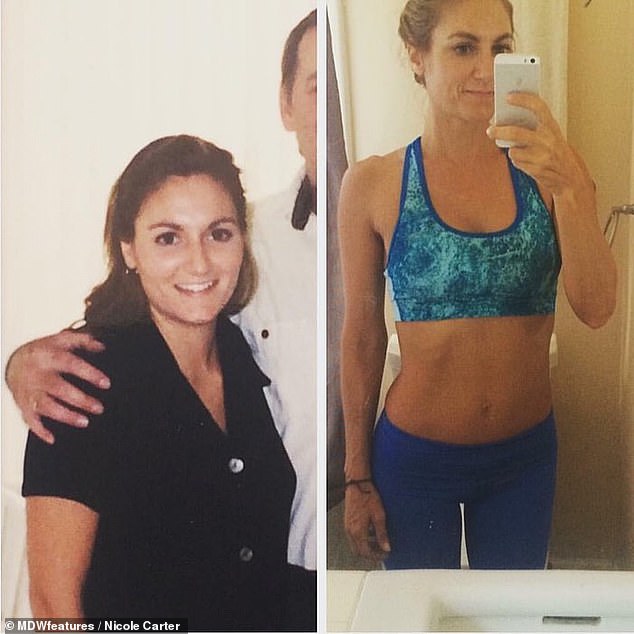 Two years after becoming plant-based, Ms Carter started to suffer with candida overgrowth, joint pain, anxiety, depression, low energy, insomnia, constipation and digestive problems. Pictured left, when she was a vegan in her younger years, and right, proud of her weight loss 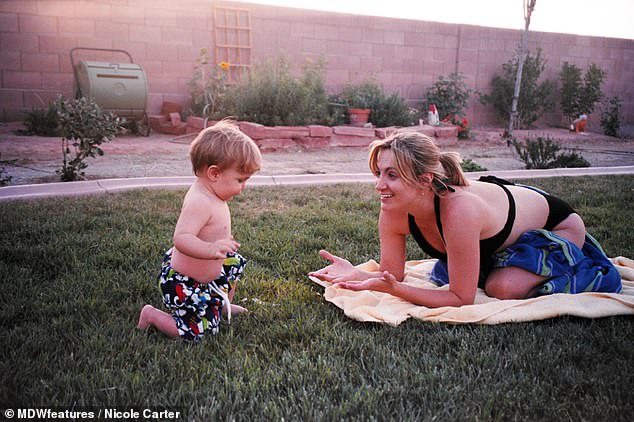 Ms Cater, pictured with one of her children who has not been named, said she now has more time and money as she doesn’t waste so long in the kitchen and shopping at markets 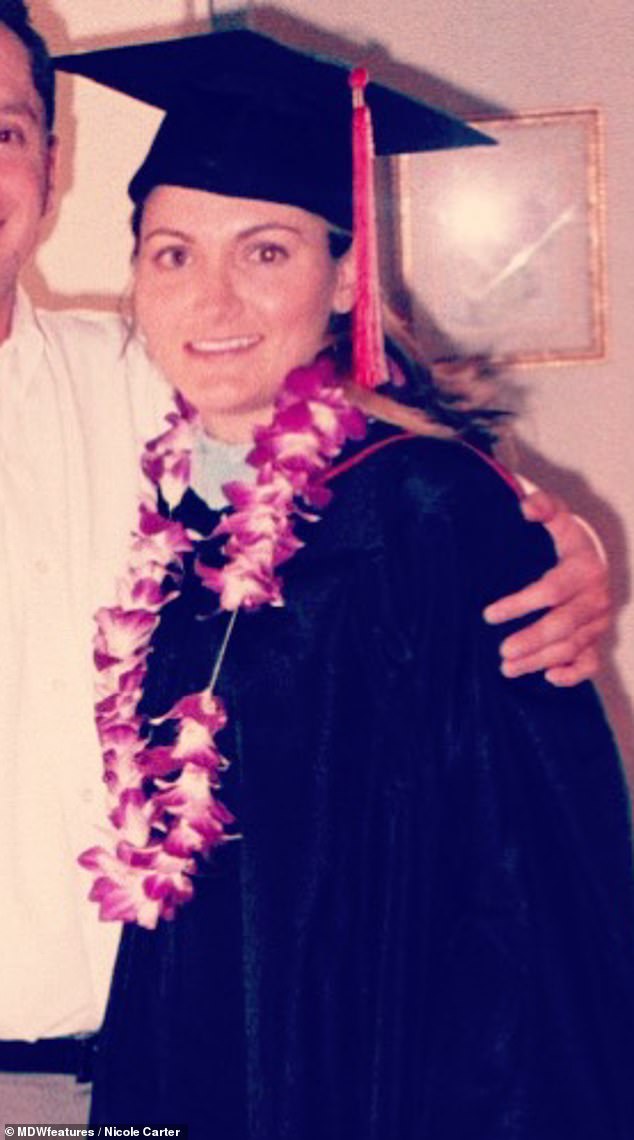 Ms Cater went vegan when she was 18 thinking it was the best thing to do for her health and to protect the environment. Pictured graduating, age unknown

‘I ate brown rice instead of white to get more fibre, mostly leafy greens such as kale, chard and rocket and I cooked greens as well. I avoided wheat. I consumed juices made freshly daily. I ate fresh berries.

‘I ate as much as I could organic or grown from my yard and spent most of my days preparing all this stuff, growing it in my garden, or shopping at farm stands and natural markets.

‘I took vitamins, I never ate sugar and I didn’t drink alcohol.’

Now, Ms Carter typically starts her day with coffee with cream, and waits until lunch for her first meal – appearing to fast – having a pound of meat such as steak.

She has half a pound of meat for dinner, sometimes adding bacon and eggs, and drinks coffee, water and sparkling water.

However fibre is recommended for a healthy digestive system and to lower the risk of heart disease, stroke, type 2 diabetes and bowel cancer.

Ms Carter said favourite meal to prepare is roast lamb – but eating like this constantly does come with a constant battle of ‘misconceptions’. 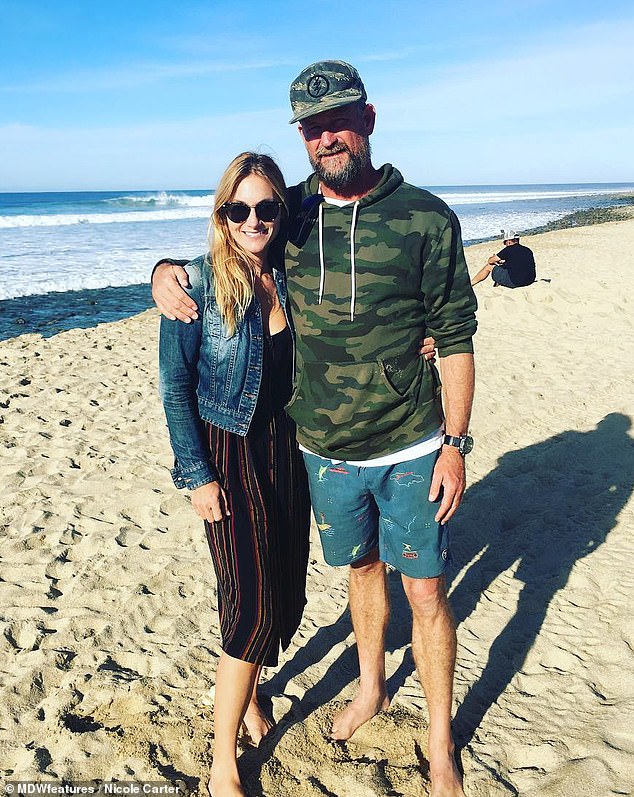 Ms Carter, pictured with her partner who has not been named, even suggests people cut down on their vegetables despite living off them for 15 years

Ms Carter, pictured recently, said: ‘My life is entirely better. My health is better, my gut, my energy and my mood’ 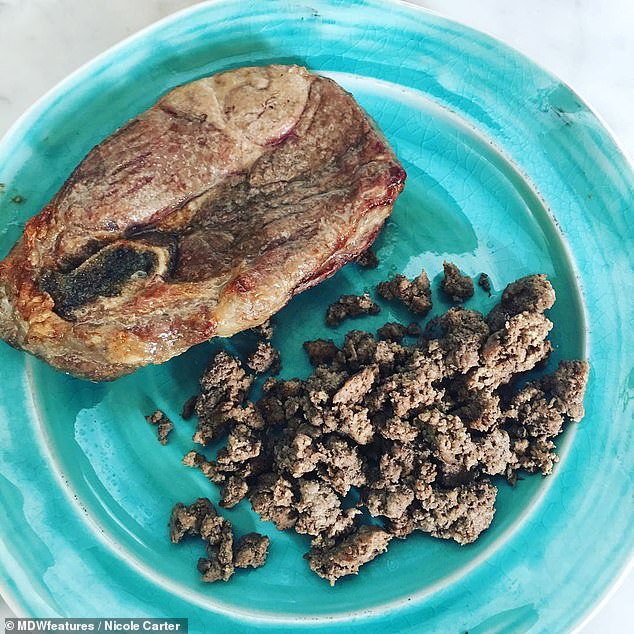 Ms Carter said the hardest thing about the carnivore diet is eating enough and the social aspect as many people can’t understand it. Pictured, a typical meal

She said: ‘The hard thing for most is eating enough. The other hard thing is the social aspect. Most people can’t wrap their head around it because of being told their entire lives that they need vegetables.

‘My life is entirely better. My health is better, my gut, my energy and my mood. I also have a lot more time for other things now that I don’t spend all my time in the kitchen cooking and cleaning up. I also save a lot of money this way.’

Sharing advice about her diet on Instagram, Ms Carter even suggests people cut down on their vegetables.

However, based on evidence, it is recommended to eat a balanced diet incorporating the five main food groups and five portions of both fruit and vegetables to get a wide range of nutrients.

She said: ‘Simply start reducing the amount of plant foods you eat. Don’t do it cold turkey, especially if you are coming from a heavy plant-based diet.

‘That can lead to severe symptoms of oxalate dumping and dehydration. Take it slow.

‘Be open minded. If you have unresolved health issues of any kind, try it.’

WHAT IS THE CARNIVORE DIET? AND IS IT SAFE?

Followers of the carnivore diet typically eat just meat, with no carbohydrates, vegetables, fruit, grains or nuts. Some also have dairy and fish.

People who adopt the only-meat approach may initially feel better due to cutting out sugar and processed food, and many have reported mental clarity, faster weight loss, improved athletic performance and a healthier digestive system.

But, considering health officials are trying to steer us more towards a plant-based protein for both health and environmental reasons, it’s worth considering the health risks of a carnivore or generally high-meat diet:

What are the dangers?

The NHS states: ‘Red meat – such as beef, lamb and pork – is a good source of protein, vitamins and minerals, and can form part of a balanced diet. But eating a lot of red and processed meat probably increases your risk of bowel (colorectal) cancer.

‘That’s why it’s recommended that people who eat more than 90g (cooked weight) of red and processed meat per day cut down to 70g, as this could help reduce your risk of bowel cancer.’