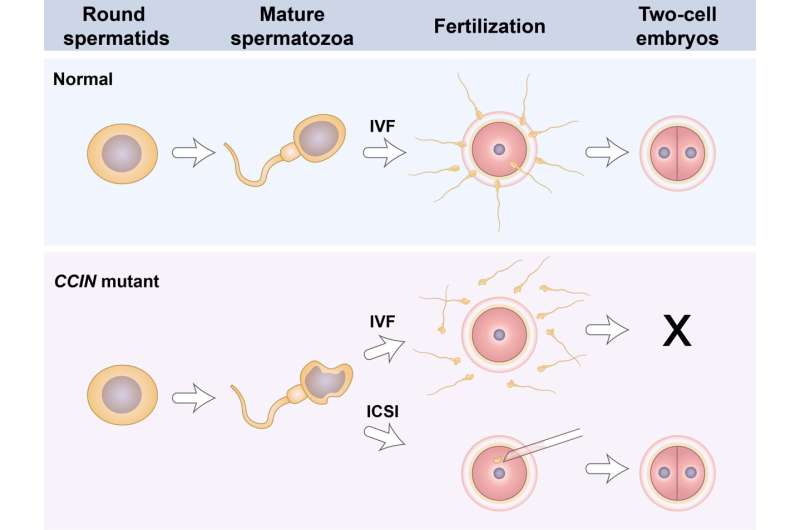 In mammalian spermatogenesis, drastic shape changes occur during the maturation of spermatids into spermatozoa. The morphology of mature sperm is one of the important indicators to evaluate male fertility, and clinical evidence reveals that sperm with abnormal morphology (teratozoospermia) have reduced fertilization capacity. Although previous studies have identified many teratozoospermia-associated genes, the etiology remains unknown for a majority of affected men.

In a study published in Science Bulletin, Yong Fan et al. identify a novel homozygous mutation and a compound heterozygous mutation of CCIN in two families suffering from male infertility. Ultrastructural analyses of the patient spermatozoa suggest that CCIN defect-associated sperm malformation resembles the type II globozoospermia, with morphological abnormality of nuclei and acrosomes as well as excess residual cytoplasm in sperm. The patient phenotypes are successfully recapitulated in mouse models with the disease-associated variants, confirming the essential role of CCIN in male fertility.

Both in vitro and in vivo studies indicate that CCIN mutations impair the stability of the Calicin protein, resulting in markedly reduced levels of Calicin in the mutant spermatids. The lack of Calicin interferes with sperm nuclear shaping and acrosome biogenesis, and ultimately causes sperm head malformation during spermiogenesis.

By further exploring the underlying mechanism of CCIN mutation-derived male infertility, the team found that all mutant spermatozoa from human patients and mice fail to adhere to the zona mass of eggs. The use of intra-cytoplasmic sperm injections (ICSI) successfully overcomes the fertilization defect caused by CCIN mutations and makes mutated mice and two couples with CCIN variants have healthy offspring.