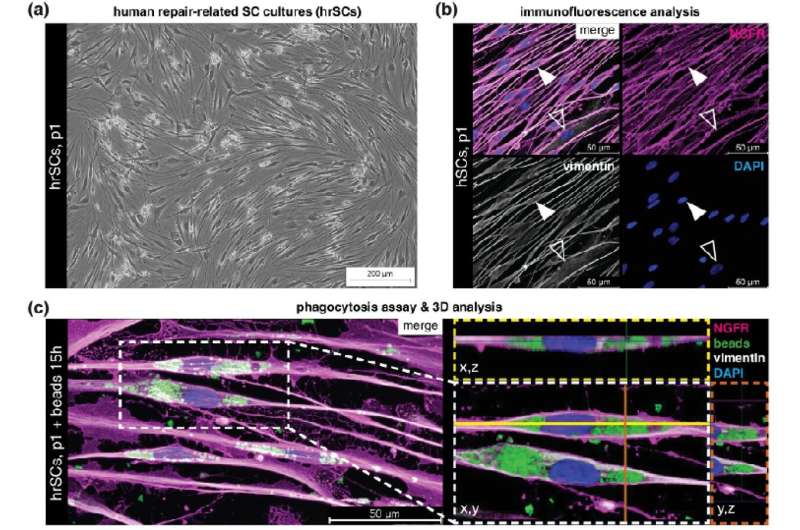 Schwann cells are known to protect and repair nerve cells. Until now, however, it was not known that they themselves take over functions of certain immune cells during nerve healing. For example, they produce signaling molecules that can activate other immune cells. In particular, however, they are able to stop inflammatory reactions in order to prevent excessive tissue damage and allow the nerve to regenerate.

“This is essential, because inflammation releases free radicals against which nerve fibers cannot protect themselves. Therefore, the inflammation must be cleared quickly, which is precisely what Schwann cells do,” explains Dr. Sabine Taschner-Mandl, who designed the study and heads a research group at St. Anna CCRI. The new results, in which the Medical University of Vienna is also significantly involved, were published in the journal Glia.

Do Schwann cells protect against malignancy?

How are these results related to tumor growth? After nerve injury, Schwann cells adopt a “repair” mode that is also found in benign infantile nerve tumors. There, it causes the tumor cells to mature and thus reach a stage where they lose their aggressive properties and no longer divide unchecked.

In particular, the current study shows that Schwann cells can influence certain immune cells, so-called T cells, which play an important role in the defense against cancer. Schwann cells—both those in nerve regeneration and those in benign tumors—carry MHC-I and MHC-II molecules on their surface that are important for T-cell regulation. Via these molecules, Schwann cells present recognition features of material they have previously taken up from their environment.

“We mimicked an inflammatory response in the laboratory and detected a whole range of additional stimulatory and inhibitory surface molecules that are also necessary for T cell activation,” explains Jakob Berner, MSc, co-first author of the study and interim Ph.D. student in Kaan Boztug’s group at St. Anna CCRI. “Our experiments show that Schwann cells are able to take up large amounts of material via phagocytosis.”

As the first immune response to a nerve cut, Schwann cells secrete substances that attract T cells, macrophages and other immune cells. Now it turned out that not only a reaction between the classical immune cells takes place, but also between Schwann cells and T cells.

While Schwann cells initially fuel the inflammatory response by releasing interferon-gamma, they can later shut it down by up-regulating the T-cell inhibitory PD-L1 molecule.