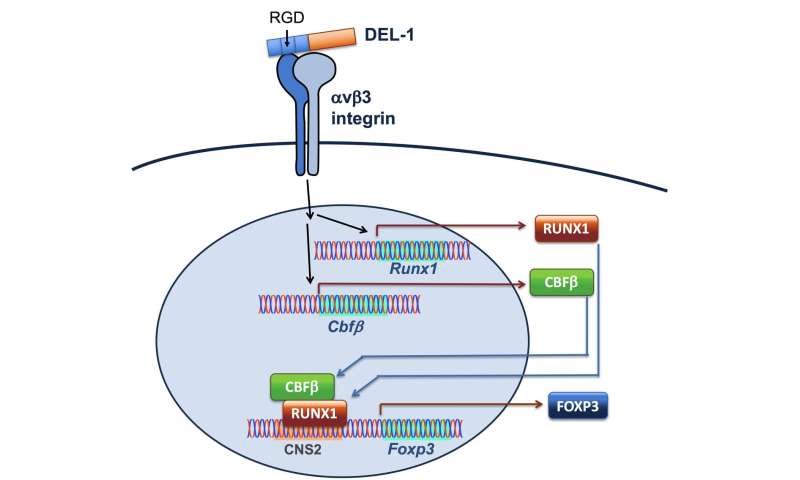 Immune response is a balancing act: Too much can lead to inflammatory or autoimmune disease; too little could lead to a serious infection. Regulatory T cells, or Tregs, are important players in striking this balance, acting as “brakes” on the immune response so it doesn’t go overboard.

Consequently, controlling the numbers and activity of Tregs is crucial in maintaining health. New findings from a multi-institutional team, including the School of Dental Medicine’s George Hajishengallis, suggest that targeting the molecule DEL-1, which promotes the generation and immunosuppressive activity of Tregs, could be an effective way to treat conditions where taming an inflammatory or autoimmune response is desired.

The team reported their findings in the Journal of Clinical Investigation.

“In earlier work we saw a correlation: During resolution of inflammation, Tregs numbers went up and DEL-1 levels went up,” Hajishengallis says. “We wanted to understand how the two were connected.”

Hajishengallis and colleagues, including Triantafyllos Chavakis of Technical University Dresden, had earlier used a mouse model of periodontitis, severe gum disease, to show that DEL-1 promotes the resolution of inflammation—in other words, helps the body return to a normal state. In the new study, they relied on this model again to probe the relationship between DEL-1 and Tregs which, like DEL-1, also become abundant during the inflammation-resolution process.

Mice that were bred to lack DEL-1 had significantly lower levels of Tregs than mice with DEL-1. Meanwhile their levels of Th17 cells, a T cell type associated with inflammation, went up. An injection of DEL-1 could restore levels of Tregs in the mice otherwise deficient in the protein.

The correlation offered a clue but not evidence of a direct relationship between DEL-1 and Tregs. “There’s a reciprocity between Tregs and Th17 cells,” says Hajishengallis. “So with this result we didn’t know if DEL-1 is acting on Tregs or Th17 cells.”

To firm up this connection, they performed experiments using mouse cells in culture to see whether DEL-1 could influence the development of T cells into either mature Th17 or Treg cells. While DEL-1 did not appear to directly influence the generation of Th17 cells, its effect on Tregs “was striking,” Hajishnegallis says. Their findings held when looking in human cells, with the generation of Tregs enhanced in the presence of DEL-1.

With more confidence that DEL-1 was supporting the activity of Tregs, the researchers pursued a series of additional experiments that unveiled more details about the signalling pathway in which DEL-1 was acting. They found that DEL-1 interacted with a molecule on the T cell surface which induced a transcription factor called RUNX1 that promotes the expression and stability of FOXP3, a “master regulator” of Tregs. “Without FOXP3 you cannot have Tregs,” Hajishengallis says.

Their work showed that DEL-1 was also acting epigenetically to stabilize FOXP3 by removing small molecular “tags” known as methyl groups located in the region of this gene.

FOXP3 deficiencies are indeed linked to serious conditions in humans. IPEX syndrome, for example, an X-linked condition caused by a FOXP3 mutation, causes people to have very low numbers of Tregs and, frequently to develop multiple autoimmune diseases.

Though the researchers had begun with a gum disease model, they believed that the link between DEL-1 and Tregs was more universal and thus investigated the link in a mouse model of acute lung inflammation, finding the same pattern: A dearth of DEL-1 was associated with severely reduced numbers of Tregs and a poorer resolution of inflammation.

In future work, Hajishengallis and his collaborators hope to go deeper into the mechanism, testing whether the source of DEL-1 matters in terms of its regulation of Tregs. Other groups, they note, may want to begin to take the findings in a translational direction to apply them in models of autoimmune diseases, which could be tamed by a shift in balance toward immunosuppression.