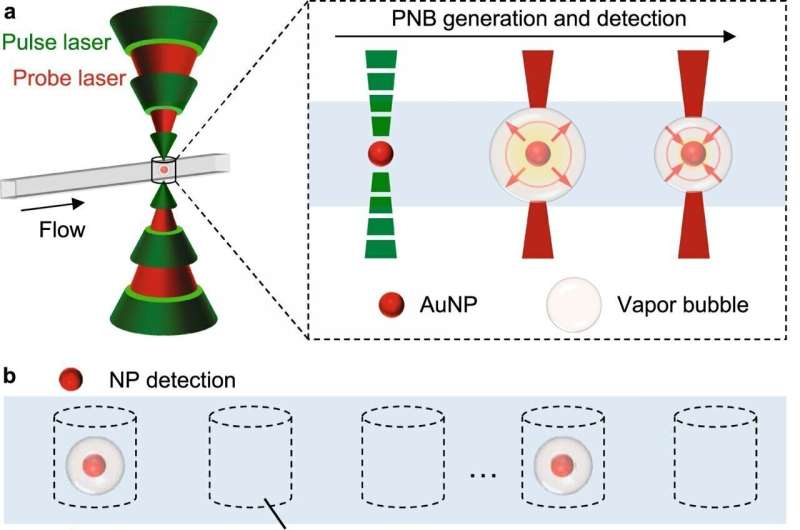 University of Texas at Dallas researchers have developed a rapid virus test using gold particles and lasers that promises to deliver results as accurate as lab tests in a fraction of the time.

The team of UTD scientists that authored the study, led by associate professor of mechanical engineering Dr. Zhenpeng Qin, tested Diamond against respiratory syncytial virus, although the researchers say the technology can be used to detect other prominent viruses, like COVID-19 and influenza.

“For the [PCR] COVID test, we drive through the pharmacy and give the sample. Getting the sample tested usually takes two to four hours before we get the results,” said Haihang Ye, a UTD research associate in mechanical engineering. “Our technology can reduce the sample testing time to 30 minutes, but the sensitivity can be as good as those molecular tests.”

Faster, cheaper and more effective virus tests are in high demand as the U.S. shifts into a new normal in the coronavirus pandemic. Though case counts are near all-time lows in North Texas, the highly contagious BA.2 variant continues to spread locally and across the country.

The cost of a COVID-19 test varies widely depending on location and type of test. A study of the largest hospitals in every state done by the Peterson Center of Healthcare and Kaiser Family Foundation Health System Tracker found coronavirus test prices ranged anywhere from $20 to more than $1,400. Only 3% of the hospitals surveyed listed testing prices below $50.

A Diamond test, which Ye said can be produced for around $15, mixes a patient sample from a nasal swab with gold nanoparticles attached to antibodies for the virus being tested. The antibodies, marked by the gold nanoparticles, then bind with proteins on the virus’ surface if the virus is present in the sample.

Researchers then inject the sample mixed with labeled antibodies into a narrow tube mounted on a glass slide. As the liquid passes through the tube, it’s hit by the beams of two lasers, one of which activates the gold nanoparticles, causing them to expand.

If the expansion is strong enough, the nanoparticle will boil the water around it and create vapor bubbles. Large nanobubbles mean the virus is present in the sample.

“If there’s no virus, there will be a tiny nanobubble signal from the particle only so we can differentiate the sample’s status,” said Yaning Liu, a UTD mechanical engineering doctoral student and co-first author of the Diamond study.

Diamond is the product of years of research and millions of dollars in grant funding, including $2.5 million in grants from the National Institute of Allergy and Infectious Diseases and a $293,000 grant from the Department of Defense’s Congressionally Directed Medical Research Programs.

To test different viruses using the technology, all researchers need to do is change the associated antibodies, Ye said. Though Diamond has the potential to expand testing options for a number of viruses, it requires researchers to know what they’re testing for.

“One of the challenges with the current tests is that providers have to kind of have an idea of what they’re looking for,” said Elitza Theel, associate professor of laboratory medicine and pathology at the Mayo Clinic in Rochester, Minn.

A less-targeted approach using a technology called metagenomic next-generation sequencing allows scientists to sequence all of the genetic material in a sample to identify which infectious pathogens are present. The technology is already in use, but the process is expensive and takes days to return results, Theel said.

“It’s not really helpful in the immediate acute setting,” she said.

While Diamond must be approved by the Food and Drug Administration before it can be used publicly, the scientists behind the technology launched a company called Avsana Labs to hopefully commercialize it. Qin serves as president of the company, which was created through UTD’s Venture Development Center.