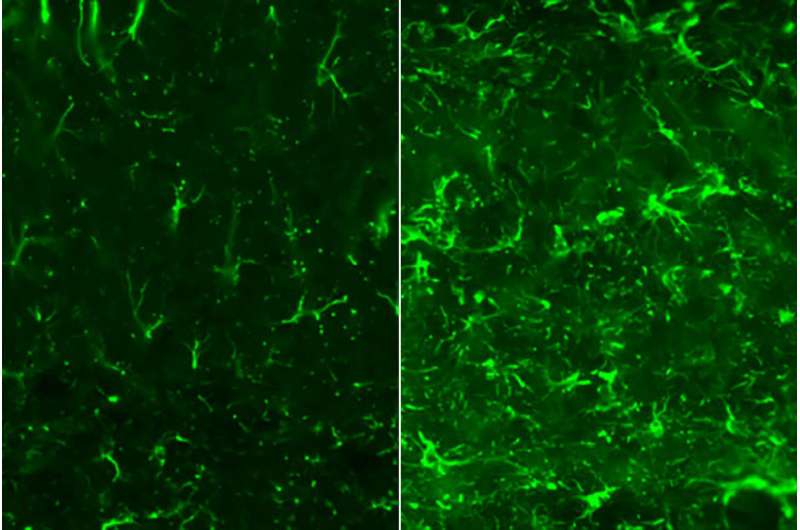 Alzheimer’s disease is the most common and best known of the tauopathies, a set of neurodegenerative brain diseases caused by toxic tangles of the protein tau. A study by researchers at Washington University School of Medicine in St. Louis has shown that targeting astrocytes—an inflammatory cell in the brain—reduces tau-related brain damage and inflammation in mice.

The findings, available online in Science Translational Medicine, highlight the pivotal role of astrocytes in driving brain damage in tauopathies, and open up new avenues toward better therapies for the group of devastating and difficult to treat conditions.

“Brain inflammation is emerging as a contributor to the development of Alzheimer’s disease, and that inflammation is driven by non-neuronal cells in the brain, including astrocytes,” said senior author Gilbert Gallardo, Ph.D., an assistant professor of neurology. “Our study highlights that inflamed astrocytes are contributing to tau-associated pathologies and suggests that suppressing their reactivity may be beneficial in reducing brain inflammation and delaying Alzheimer’s progression.”

Tau, normally found inside neurons in the brain, helps form internal scaffolding that gives neurons their shape. When tau gets tangled, though, it leads to brain inflammation, tissue damage and cognitive decline. Tau forms tangles in people who carry mutations in the tau gene or who have experienced assaults on the brain such as repeated concussions or exposure to neurotoxic chemicals. In Alzheimer’s, tau tangles take shape relatively late in the disease process, apparently triggered by earlier disease-related brain changes such as the buildup of plaques of the protein amyloid beta.

In many neurodegenerative conditions, so-called reactive astrocytes—astrocytes activated in such a way that they cause harm to, rather than protect, brain tissue—are plentiful at sites of neuronal damage. In previous work on amyotrophic lateral sclerosis (ALS), a neurodegenerative disease but not a tauopathy, Gallardo and colleagues identified an astrocyte protein that encouraged the cells to take on toxic characteristics and exacerbate brain inflammation. Gallardo suspected that the protein, named alpha2-Na+/K+ adenosine triphosphatase (alpha2-NKA), also may drive the toxicity of astrocytes in Alzheimer’s disease and other tauopathies. 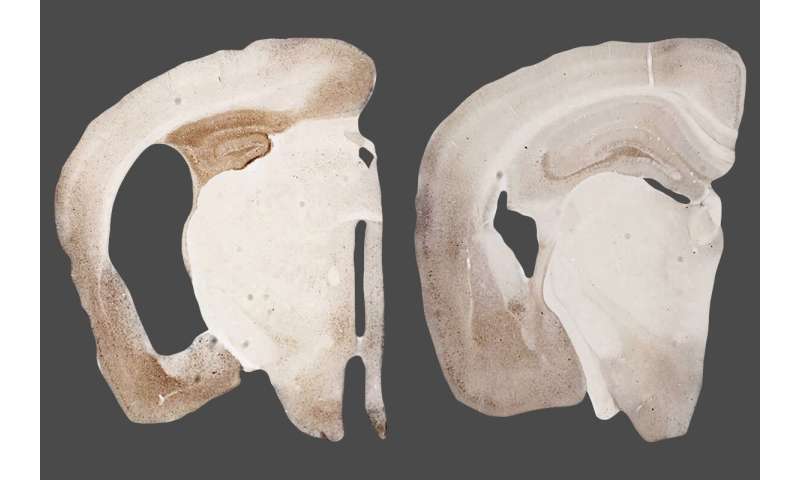 Gallardo, first author Carolyn Mann, then a technician in Gallardo’s lab, and co-author Celeste Karch, Ph.D., an associate professor of psychiatry, obtained data on the expression level of the gene that codes for alpha2-NKA. They studied brain samples from 80 people who had died of Alzheimer’s; 82 who had of died of a tauopathy called progressive supranuclear palsy (PSP); and 76 who had died of causes unrelated to neurodegeneration. The researchers found that alpha2-NKA was highly expressed in people who had died of Alzheimer’s or PSP compared with those who had died of other causes, suggesting that the protein could be a contributor to brain damage in both conditions.

To further investigate the role of alpha2-NKA, the researchers turned to mice genetically engineered to start developing tau tangles by about 6 months of age. By 9 ½ months of age, such animals’ brains are damaged, atrophied and inflamed, and they have lost the ability to properly perform everyday tasks of rodent life such as building a nest. The researchers found that, like people with tauopathies, the genetically modified mice also had elevated levels of alpha2-NKA in their brains. The levels rose as the mice got older and the inflammation and brain damage worsened.

Digoxin, a drug used to treat heart conditions, interferes with the activity of alpha2-NKA. The researchers tested whether treating mice with digoxin could reduce tau tangles, brain shrinkage and inflammation, and behavioral changes. The drug worked, and moreover, it worked whether they gave the compound to mice under 6 months old, when the animals were just beginning to develop tau tangles, or at 8 months, when the tangles and damage already were established.

“The take-home message here is that suppressing the inflamed astrocytic state halts disease progression,” Mann said. “This is important because experimental therapeutics for Alzheimer’s and related tauopathies have focused largely on clearing pathological proteins that have been implicated in neuronal dysfunction and death. But our study gives evidence that targeting inflamed astrocytes and brain inflammation may be the key to successfully treating such conditions.”