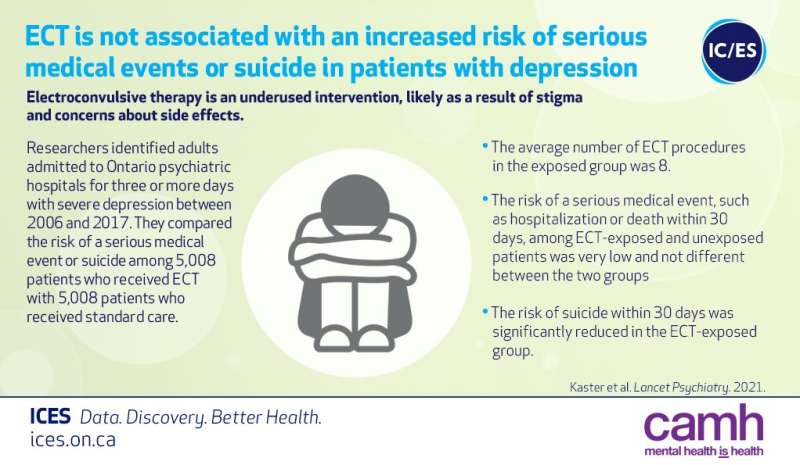 Electroconvulsive therapy (ECT) is a medically safe mental health intervention, according to a new study led by CAMH researcher Dr. Tyler Kaster as part of his doctoral studies at ICES and the University of Toronto. The study was published today in the journal The Lancet Psychiatry, and is among the largest and most comprehensive to compare the safety of ECT with standard treatment amongst individuals with depression.

This study, entitled Risk of serious medical events in patients with depression treated with electroconvulsive therapy: a propensity score-matched, retrospective cohort study, looked at the psychiatric records of over 10,000 patients in Ontario whose depression was serious enough to require at least three days of hospitalization, and compared the risk of medical hospitalization or death within 30 days for patients who had ECT compared to patients who did not. It concludes that, “among individuals hospitalized with depression, there is not a clinically significant increased risk for serious medical events with exposure to ECT while the risk of suicide appears to be significantly reduced. The benefits of ECT on depression outcomes may outweigh its risks in this population.”

“ECT is the single most effective treatment we have in psychiatry for depression,” said lead author CAMH Psychiatrist Dr. Tyler Kaster, who treats ECT patients at the CAMH Temerty Centre for Therapeutic Brain Stimulation. “But prejudice and discrimination around the treatment is enormous in terms of preventing people from accessing it.”

In Canada, over 1 in 9 adults (3.2 million Canadians, or 11.3 percent) will experience a major depression in their lifetime, at which time they will most likely be prescribed antidepressants and/or psychotherapy. However, about a third of these individuals will fail to respond to these first-line treatments, and then will be diagnosed with treatment-resistant depression. There are a number of interventions for this condition including medication combinations, new drugs like ketamine and a neurostimulation treatment called repetitive transcranial magnetic stimulation (rTMS). However, when these treatments don’t lead to improvement or when a depression becomes very severe leading to hospitalization, ECT is often considered as the next step, as it is highly effective at rapidly reducing symptoms of depression and suicidal thinking. Learn more about ECT on the CAMH website.

Dr. Simone Vigod, study corresponding author, senior adjunct scientist at ICES and Chief of Psychiatry at Women’s College Hospital, said the study illustrates the importance of emphasizing the safety and efficacy of ECT as an effective mental health intervention for people for whom nothing else has worked. “At Women’s College Hospital, we believe that supporting people living with mental health conditions has never been more important,” added Dr. Vigod. “Doing so requires providing patients with a full spectrum of evidence-based treatments founded on rigorous research evidence. This investigation adds to the existing body of research on the safety and efficacy of ECT, which can serve as a valuable option for those with severe depression.”

Dr. Kaster believes that the persistent fear associated with ECT is a reflection of the overall level of prejudice and discrimination that continues to persist in regards to mental illness itself.