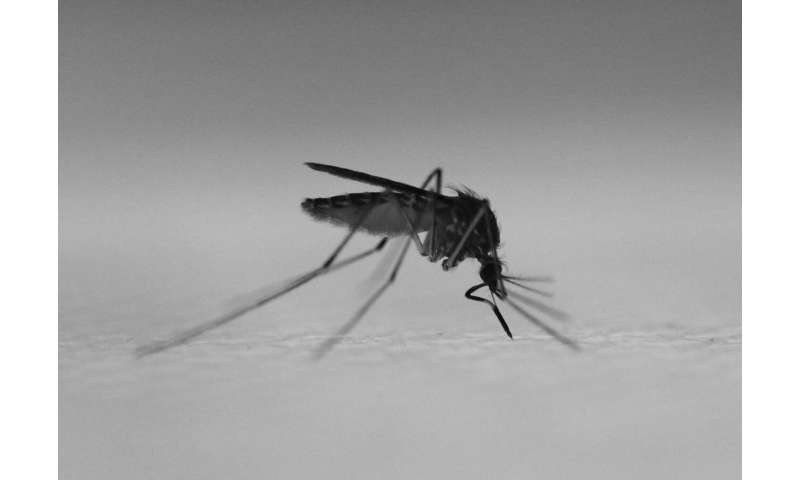 Scientists have developed a tool for studying the biting behavior of common pathogen-carrying mosquitoes, according to new research published this week in eLife.

The tool, which uses an artificial blood meal and a surface that mimics human skin, will provide detailed understanding of blood feeding without using human subjects as bait. It can also fit conveniently into a backpack, allowing the study of mosquitoes in laboratory and natural environments.

Blood feeding is essential for mosquitoes to reproduce, but it is during blood feeds on human hosts that they pass on pathogens such as malaria.

“Although the initial step in obtaining a blood meal—flying towards a host—is relatively well characterized, the steps that unfold after a mosquito has landed on a host are less well understood,” explains first author Felix Hol, a researcher at Institut Pasteur and the Center for Research and Interdisciplinarity, Paris, France. “There is a lack of tools available to measure mosquito biting behavior, and those that do exist rely on using human hosts which limits the number and type of experiments you can do—you cannot study pathogen-carrying mosquitoes in this way.”

This is important because it is thought that factors such as infection can affect a mosquito’s feeding behavior, including the number of feeding attempts they make and the size of the meal they take. In turn, these aspects can alter the transmission dynamics of pathogens. To address this, Hol and colleagues from Stanford University, California, US, Institut Pasteur and CRI (Universite de Paris/INSERM), Paris, France, developed the biteOscope—a tool that allows the high-resolution study of how mosquitoes explore and probe host skin surfaces before taking a meal.

It consists of a bite ‘substrate’ – a transparent, temperature-controlled surface that mimics body temperature to attract mosquitoes. An artificial meal is applied on top of this and covered with a commonly used membrane that mosquitoes can pierce. The meal resembles blood, allowing mosquitoes to engorge and increase their weight by two to threefold. This bite substrate is then placed in a transparent cage, and an external camera records the mosquitoes’ behavior.

The team tested biteOscope with four medically important species of mosquito and built a computer model to analyze behaviors from images captured of the mosquitoes as they landed on the ‘skin’. “We found that the time a mosquito spends exploring skin that does not lead to a successful feed is rarely longer than the duration of a successful feed,” says author Louis Lambrechts, Research Director at the Department of Virology, Institut Pasteur. “This suggests that if blood is not found within a certain time, the mosquitoes give up and move on.”

They next demonstrated how the tool can track body parts to understand how the mosquitoes ‘sense’ the surface they are exploring. When they coated the skin mimic with the insect repellent DEET, they found that mosquitoes tended to land and immediately take off, only making contact with their legs, which suggests repulsion is mediated by leg contact.