The New York county has now banned unvaccinated children from schools and other public spaces as up to 153 cases of measles were reported last year from October to December. Rockland County Executive Ed Day claimed the outbreak is the “longest in the US since the measles disease was officially eradicated in 2000”. Speaking on Fox News, Dr Mikhail Varshavski warned “people will die” unless the outbreak is kept under control.

He said: “What’s happening is there’s a lot of misinformation floating around very specific communities and one of these biggest communities in the United States happens to be Rockland County.

“Mr Day said there are 153 cases since last October, this year alone there’s already about 50 cases.

“So I’m really proud that Rockland County is taking steps not only preventing those children who are not vaccinated from attending school but also trying to limit the spread because measles spreads like wildfire.

“If someone who is not vaccinated is exposed to someone who has measles 90 percent likelihood they will catch it. 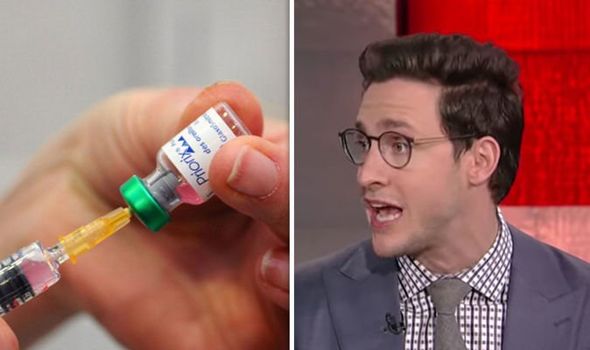 Before the vaccine was around, 450 people a year would die as a result of measles

“So this isn’t something that they’re taking lightly. They don’t want this to become an epidemic where the entire county is covered in measles.

“Because people will die.”

He added: “Before the vaccine was around, 450 people a year would die as a result of measles.

“We should not be having this in the United States where we have a vaccine that if taken properly works 95-96 percent of the time.”