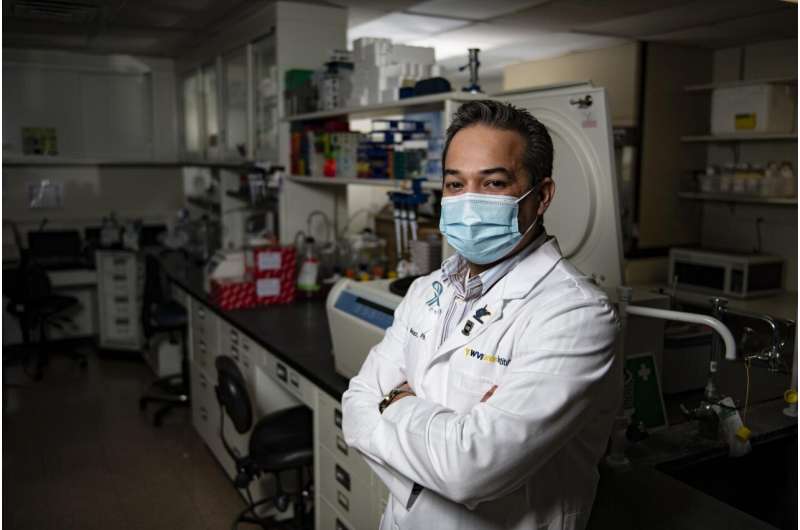 When health officials confirmed the first three cases of a COVID-19 variant in West Virginia late Friday (Feb. 19), they were not surprised. In fact, WVU researchers had, in recent weeks, already formed a partnership with colleagues at Marshall University and the Department of Health and Human Resources to identify SARS-CoV-2 variants.

Utilizing an automated system and whole genome sequencing, the team—led by Peter Stoilov, Peter Perrotta and Ryan Percifield at WVU and Jim Denvir and Don Primerano at Marshall—is set to analyze hundreds of samples per week from across the state.

“Ongoing surveillance and focused efforts to characterize the virus in areas of outbreak will identify the SARS-CoV-2 variants that may impact the future of the COVID-19 pandemic in West Virginia,” said Laura Gibson, senior associate vice president of Research and Graduate Education, WVU Health Sciences. “And it will detect new variants that arrive from outside or emerge in the state.”

“Identification of the UK CoV-2 variant represents the efforts of a team of investigators at Marshall University, West Virginia University, the WV DHHR and QLabs,” said Primerano, professor and vice chair of biomedical sciences at the Marshall University Joan C. Edwards School of Medicine. “Dr. Jim Denvir at Marshall University developed the analytic pipeline for calling the virus genetic variants based on whole genome sequence data derived from SARS-CoV-2 positive cases. This ongoing collaboration is designed to detect CoV-2 variants across the state and guide efforts to control and contain the virus.”

The three cases confirmed thus far are of the variant B.1.1.7, originally detected in the United Kingdom and more commonly referred to as the ‘UK Variant.’ Forty-two other states, including those that border West Virginia, have reported 1,523 cases.

The strain is believed to be more contagious than the original virus that causes COVID-19. Recent data, however, suggests that the existing vaccines can drastically curtail severe infections resulting from the variants.

Mutations and variants: ‘A natural competition’

A special biohazard sticker-laden package of airtight containers and a bucket of dry ice recently arrived at a high biosafety-level WVU laboratory. The primary contents: a tube holding one-half-milliliter’s amount of B.1.1.7, courtesy of the federal government.

Virologists like Ivan Martinez knew they had to get a jumpstart on studying these emerging variants before they really snatched the state into a stranglehold. The first confirmed case of B.1.1.7 in the United States came in December, a few months after emerging in the United Kingdom where it now accounts for a majority of its coronavirus cases.

When Martinez—an associate professor in the WVU School of Medicine’s Microbiology, Immunology & Cell Biology Department and WVU Cancer Institute—and his team received the sample, they got to work.

Martinez said the ultimate goal of his lab research is twofold: To better understand how COVID-19 variants evolve and to potentially lead to the development of therapeutics or vaccines.

Some research centers around the ACE2 receptor, a protein on the surface of certain human cells. The SARS-CoV-2 virus, which has been widely depicted as a spikey ball, binds their spikes to the ACE2 receptor similarly to how a key fits into a lock.

ACE2 receptors are present throughout the human body such as the liver, brain, heart and intestines. That’s why COVID-19 can affect so many organs, Martinez said.

Preliminary research elsewhere shows that specific mutations in the variant spike protein make the virus bind even tighter to the receptors, he added, which explains why B.1.1.7 is considered more contagious.

Another alarming aspect of the variant, Martinez said, is that it has more mutations in other genes beyond the spike protein of which researchers still do not understand. When the COVID-19 pandemic unraveled around the world, scientists noted that SARS-CoV-2 mutated at a rate of one or two new mutations a month—more slowly than other RNA viruses. 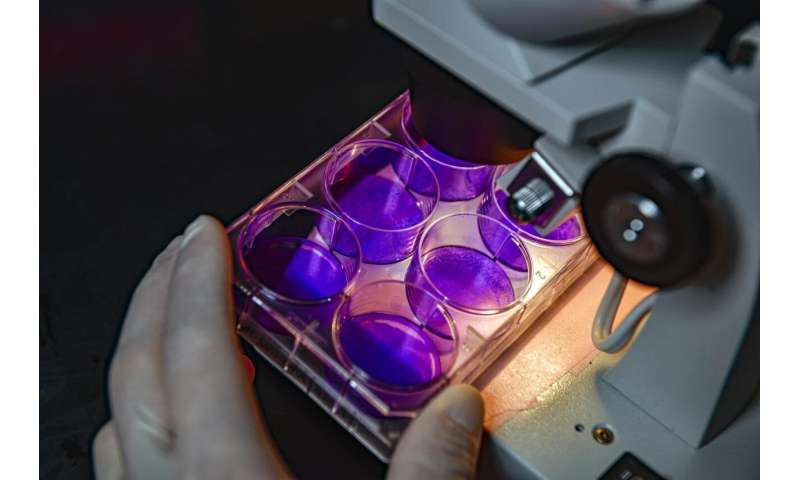 B.1.1.7 has at least 17 different mutations in its genetic code.

“We know that viruses mutate, which isn’t surprising,” Martinez said. “One or two new mutations a month is not that much. Then suddenly we see this UK Variant from out of nowhere with 17 new mutations. Scientists were scratching their heads thinking, ‘Where did this come from?'”

Martinez and others have a theory: The immune systems of some people are simply inefficient.

“There’s evidence, for example, of people carrying the virus in their gut for several months,” he said. “It’s very likely that a person can get infected with the virus but their immune system isn’t good enough to clear the virus. It then has enough time to train itself to make mutation after mutation as it fights the immune system.”

Martinez said it’s feasible to carry the virus for an extended period of time but never test positive. That’s because it can fester in various organs whereas a nose swab or saliva test detects its presence in primarily the upper respiratory tract. Martinez emphasized, though, that these types of cases are very rare, maybe one in a million or more. Most human immune systems can clear the infection of the virus.

With the emergence of new variants, Martinez predicts that COVID-19 may be here for the long haul. Two other common variants include one originally detected in South Africa (B.1.351) and another in Brazil (P.1). A handful of states in the U.S. have even confirmed their own regional variants.

“As the task force sequences samples in West Virginia, I would not be surprised if we found a West Virginia variant with one or two mutations,” Martinez said. “Again, that’s normal. It’s a natural competition. It’s just pure biology.

“It’s going to be very hard to eradicate because most of these viruses, even if you vaccinate the entire world population, have animal reservoirs, meaning that they can go back to animals and come back and infect humans.

“But we don’t have to be afraid. Coronaviruses have always been around. The way I see it is COVID-19 will stay with us like a seasonal virus. We’re going to go, ‘Hey, I’m going to get my flu shot and my coronavirus shot.’ That’s it. And life continues.”

The more people that get vaccinated, the harder it will be for the virus to spread and replicate and for new variants to emerge, said Sally Hodder, director of the West Virginia Clinical and Translational Science Institute and associate vice president for clinical and translational research at WVU.

Scientists are also looking at tweaking the vaccine formulations or developing “boosters” to provide stronger protections.

But until the majority of Americans get the vaccine, it will remain ever critical to follow the guidelines recommended to prevent viral spread, Hodder added.

“We need to do everything in our power to decrease viral spread and, therefore, decrease viral mutations while vaccination is scaling up,” Hodder said. “Failure to control viral spread at this juncture could facilitate further mutations that may make existing vaccines less effective. It is critically important that everyone (vaccinated and unvaccinated) continue to mask up, social distance and wash our hands, particularly at this time when there’s light at the end of the tunnel. We don’t want to shoot ourselves in the foot.”

Hodder believes the collaborative efforts between WVU, Marshall and the DHHR will help the state respond proactively and potentially mitigate outbreaks of new variants.