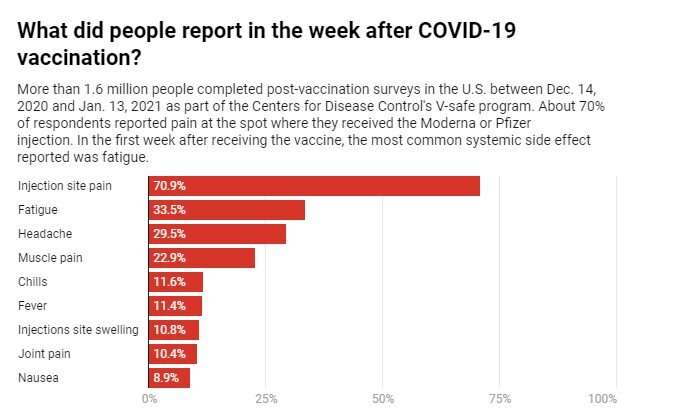 If someone gets a headache or feels a bit under the weather after receiving a COVID-19 vaccine, it’s become common to hear them say something like “Oh, it just means my immune system is really working hard.” On the flip side, when people don’t notice any side effects, they sometimes worry the shot isn’t doing its job or their immune system isn’t reacting at all.

Is there any link between what you can notice after a vaccine and what’s happening on the cellular level inside your body? Robert Finberg is a physician who specializes in infectious diseases and immunology at the Medical School at the University of Massachusetts. He explains how this perception doesn’t match the reality of how vaccines work.

What does your body do when you get a vaccine?

Your immune system responds to the foreign molecules that make up any vaccine via two different systems.

The initial response is due to what’s called the innate immune response. This system is activated as soon as your cells notice you’ve been exposed to any foreign material, from a splinter to a virus. Its goal is to eliminate the invader. White blood cells called neutrophils and macrophages travel to the intruder and work to destroy it.

This first line of defense is relatively short-lived, lasting hours or days.

The second line of defense takes days to weeks to get up and running. This is the long-lasting adaptive immune response. It relies on your immune system’s T and B cells that learn to recognize particular invaders, such as a protein from the coronavirus. If the invader is encountered again, months or even years in the future, it’s these immune cells that will recognize the old enemy and start generating the antibodies that will take it down.

In the case of the SARS-CoV-2 vaccines, it takes approximately two weeks to develop the adaptive response that brings long-lasting protection against the virus.

When you get the vaccine shot, what you’re noticing in the first day or two is part of the innate immune response: your body’s inflammatory reaction, aimed at quickly clearing the foreign molecules that breached your body’s perimeter.

It varies from person to person, but how dramatic the initial response is does not necessarily relate to the long-term response. In the case of the two mRNA COVID-19 vaccines, well over 90% of people immunized developed the protective adaptive immune response while fewer than 50% developed any side effects, and most were mild.

You may never know how strongly your body’s adaptive immune response is gearing up.

The bottom line is you can’t gauge how well the vaccine is working within your body based on what you can detect from the outside. Different people do mount stronger or weaker immune responses to a vaccine, but post-shot side effects won’t tell you which you are. It’s the second, adaptive immune response that helps your body gain vaccine immunity, not the inflammatory response that triggers those early aches and pains.

What are side effects, anyway?

Side effects are normal responses to the injection of a foreign substance. They include things like fever, muscle pain and discomfort at the injection site, and are mediated by the innate immune response.

Neutrophils or macrophages in your body notice the vaccine molecules and produce cytokines—molecular signals that cause fever, chills, fatigue and muscle pain. Doctors expect this cytokine reaction to happen any time a foreign substance is injected into the body.

In studies where neither recipients nor researchers knew which individuals were getting the mRNA vaccine or a placebo, approximately half of people aged 16 to 55 who received a SARS-CoV-2 vaccine developed a headache after the second dose. This reaction may relate to the vaccine—but a quarter of people who received just a placebo also developed a headache. So in the case of very common symptoms, it can be quite difficult to attribute them to the vaccine with any certainty.

Researchers anticipate some reports of side effects. Adverse events, on the other hand, are things that physicians do not expect to happen as a result of the vaccine. They would include organ failure or serious damage to any part of the body.

The blood clots that triggered the U.S. to pause distribution of the Johnson & Johnson vaccine are a very rare event, apparently happening with one-in-a-million frequency. Whether they are definitely caused by the vaccine is still under investigation—but if scientists conclude they are, blood clots would be an extremely rare side effect.

What component in the shot causes side effects?

The only “active ingredient” in the Pfizer and Moderna vaccines is the mRNA instructions that tell the recipient’s cells to build a viral protein. But the shots have other components that help the mRNA travel inside your body.

To get the vaccine’s mRNA into the vaccinated person’s cells where it can do its job, it must evade enzymes in the body that would naturally destroy it. Researchers protected the mRNA in the vaccine by wrapping it in a bubble of lipids that help it avoid destruction. Other ingredients in the shots—like polyethylene glycol, which is part of this lipid envelope—could cause allergic responses.

If I feel sick after my shot, does that signal strong immunity?

Scientists haven’t identified any relationship between the initial inflammatory reaction and the long-term response that leads to protection. There’s no scientific proof that someone with more obvious side effects from the vaccine is then better protected from COVID-19. And there’s no reason that having an exaggerated innate response would make your adaptive response any better.