Want to stop ageing in its tracks? Don’t be like me.

Instead, from about the age of 30 or even earlier, you should spend at least some time standing on one leg. Unwobblingly. Minutes at a time. Be a flamingo.

Me? I started falling over 15 years ago. At first I blamed it on always being in a rush (that has not changed). Then I got anxious about it. But the time I ended up at the physio, I was a mess of blue, purple and yellow bruises. Was the end nigh? 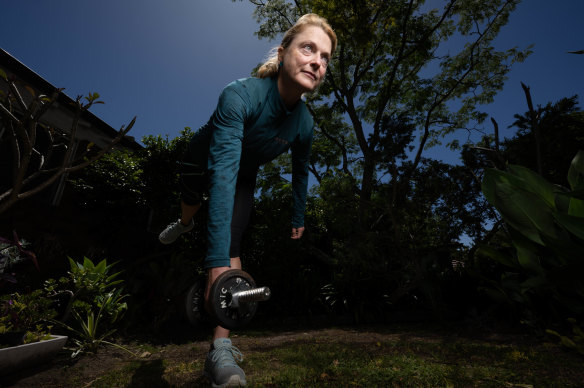 Sara Stace demonstrates the exercise she does to strengthen her hip muscles in Sydney.Credit:Janie Barrett

It wasn’t too late to fix the problem, said my physio Justine Trethewey. The very first task she gave me involved underpants. Putting them on while standing. One leg at a time. No holding on to anything. No sitting on the bed. No wobbling. Took a while to get the hang of it. Pretty sure I could now do it under a towel change these days without embarrassing myself.

A new report released today from Cathie Sherrington and colleagues at the University of Sydney and NEURA led by Kim Delbaere, says Australia must take a national approach to falls prevention. It will save lives and money.

There’s the individual approach. We should all be engaging in exercises that target our balance. Stand on one foot. Buy a soft balance mat or a balance ball. Once you’ve stepped on, close your eyes and lift one foot and then the other. Do strength training. Try tai chi. These all prevent falls. And start doing it now, no matter how old you are, says Sherrington.

Then there’s the government approach: Sherrington says we should establish a plan which would include all levels of government and other sectors. Fix residential care and aged care. Include physios on Medicare because it would lower the overall cost of falls to the community.

In 2020, more than 5000 Australians died as a result of falls. In that same year, treatment of injuries from falls in older people came at a price tag of over $2.3 billion. Sherrington predicts by 2040, the number of Australian deaths from falls will rise to 8000.

There’s no question that older people have falls more frequently but there is so much we can do to stop that happening to us.

And that’s exactly what Sara Stace, 48, decided to do. A few years back her grandmother fell and broke her hip. Stace was already fit but decided to add a balance element in to help her avoid falling.

“I had three examples of elderly family members falling and it had a big impact on their lives,” she said.

So she went to a physio for help who advised specific exercises including what I’d call a modified flamingo.

Stand on one leg. Hold out your wing (or arm) with a weight attached and bend over keeping leg, arm and body in a straight line. It’s pretty tough at the outset but Stace now does eight of those in a row, in three separate sets. She also bought a balance board ostensibly for her kids to practise surfing but Stace now uses it as well.

David Barnes, 53, does calf raises while going to the loo and stands on one leg while brushing his teeth. When he started, he was already in a bit of pain and struggling to run. An orthopaedic surgeon told him he would need a hip replacement unless he took action.

“I found the right people to help me, including exercise physiologists, and I rehabbed the crap out of it,” he said.

Barnes was determined to get back to playing soccer with his mates. He’s now doing one better – playing on a team with 18 year olds and refusing to take a fall.

Sherrington, who is working with the Australia and New Zealand Falls Prevention Society and NEURA, says there is an extraordinary gap between what we know works to prevent falls and then putting it into practice. She says physios and exercise physiologists are brilliant at understanding how to help us but for many, access to those allied health services is out of reach.

Her advice? “Start soon, no matter how old you are.”

These days I might trip but rarely fall. Me and the other flamingos.