Due to the emergence of new variants of the severe acute respiratory syndrome coronavirus 2 (SARS-CoV-2), the coronavirus disease 2019 (COVID-19) pandemic has been defined by waves of increased population infections and hospitalizations. Two notable waves have been caused by the SARS-CoV-2 Delta and Omicron variants. 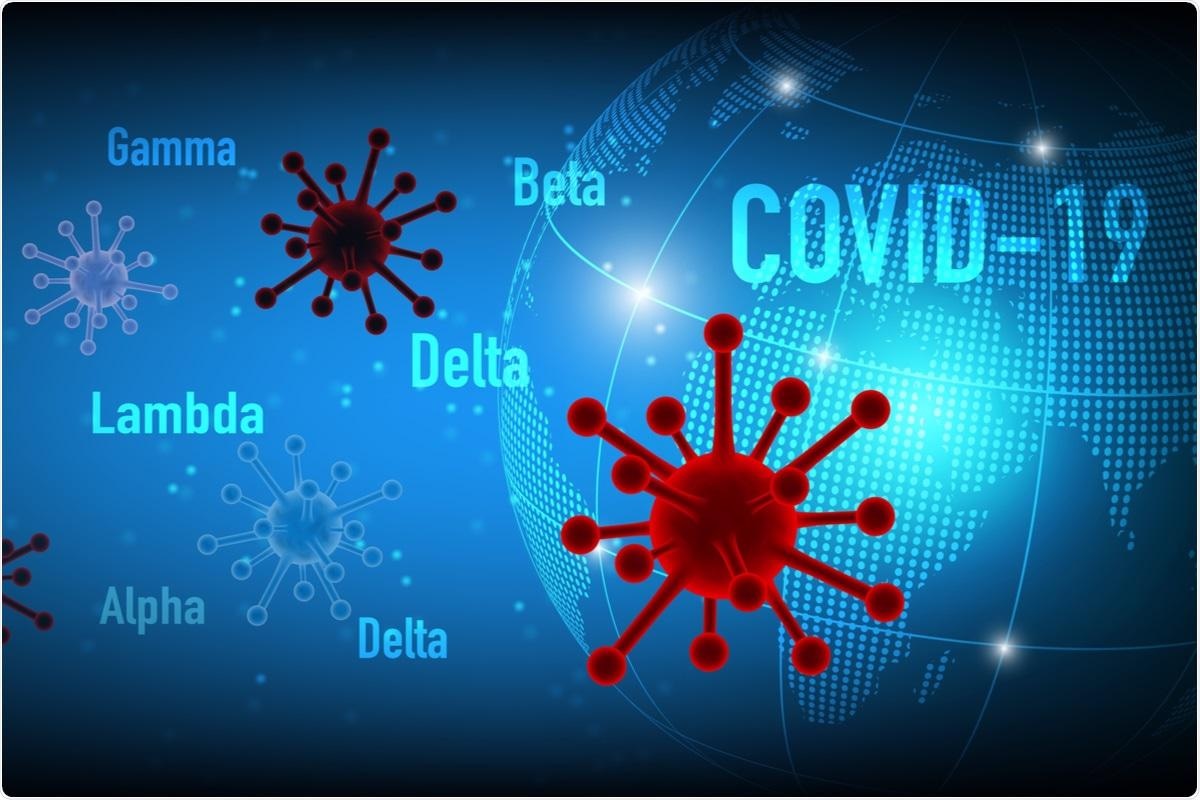 In nasal swab virus titers, the Delta variant was associated with three-fold higher loads as compared to the Alpha variant, whereas an additional 1.5-order-of-magnitude rise was observed in Omicron-infected swabs. To date, site alterations in the spike and other viral domains have been the only mechanisms proposed to be responsible for such escalations in host nasal infection.

In a new study published on the bioRxiv* preprint server, researchers studied three possible methods of cell infection and viral replication that have been affected by SARS-CoV-2 mutations through the use of a novel respiratory model.

The researchers developed a mechanistic, within-host, pre-immunity respiratory tract infection model that was applied to unvaccinated, previously uninfected, and immune-compromised patients. This model was used to predict infection and viral load from inhaled SARS-CoV-2 exposures in the respiratory system in the short term (hours to days).

On these timescales, the model assumes that all immune system protection is gone, which is consistent with a novel virus exposure. All results using this model are based on the best available data for the SARS-CoV-2 Alpha variant.

The researchers also utilize the model to investigate three potential mechanisms for the many SARS-CoV-2 mutations observed in the Delta and Omicron variants. Cell infectivity, or the probability of infecting per infectious virion-cell encounter per second, was the first mechanism studied using the current model.

The duration of the eclipse phase, or the time between endocytosis and the discharge of the first daughter virion by a newly infected cell, was the second mechanism, whereas the third mechanism was the efficiency of virion replication, which is the number of infectious virions replicated per day.

The researchers sought to determine which alterations in the Alpha variant's best-known parameter values may account for the Delta and Omicron variants’ substantial increases in nasal infectious titers.

State diagram of total infectious virions replicated over 24 (left) and 48 (right) hours from a single infected (ciliated) cell in the upper nasal passage, calculated over ranges of probability to infect per ciliated cell encounter per second (horizontal) and number of infectious virions replicated per day (vertical). Simulations start at onset of cell infection and assume the alpha variant 12-hour latency time before infected cells begin to replicate. Data presented are averages over 100 realizations, with orders of magnitude on level sets and in the color bar.

There was not a single change in infection probability or replication rate, nor a combination of mutations, that was found to be responsible for the over increased viral burden of the Delta and Omicron variants when compared to the Alpha variant. However, one plausible explanation for this increased viral burden could be due to the increased efficiency of the infected cell at replication, while also shedding up to twice as many infectious daughters per day.

The researchers then reduced the latency time from their prior experiment, which had a duration of 12 hours, to two hours, followed by allowing the model to run for two consecutive days. To this end, a significant increase in the number of infected cells exiting the eclipse phase, as well as a rise in the shedding of infectious virions was observed.

More specifically, reducing the latency period from 12 to six hours increased the viral load shed by three to four orders of magnitude at a rate of 500 to 4,000 virions that were shed each day post-latency.

The observations made in the current study correlate within clinical observations, wherein the Delta variant caused viral titers to increase by up to three orders of magnitude. Moreover, the researchers found that the combination of a high virion replication rate and short latency times closely reflected Omicron viral loads. 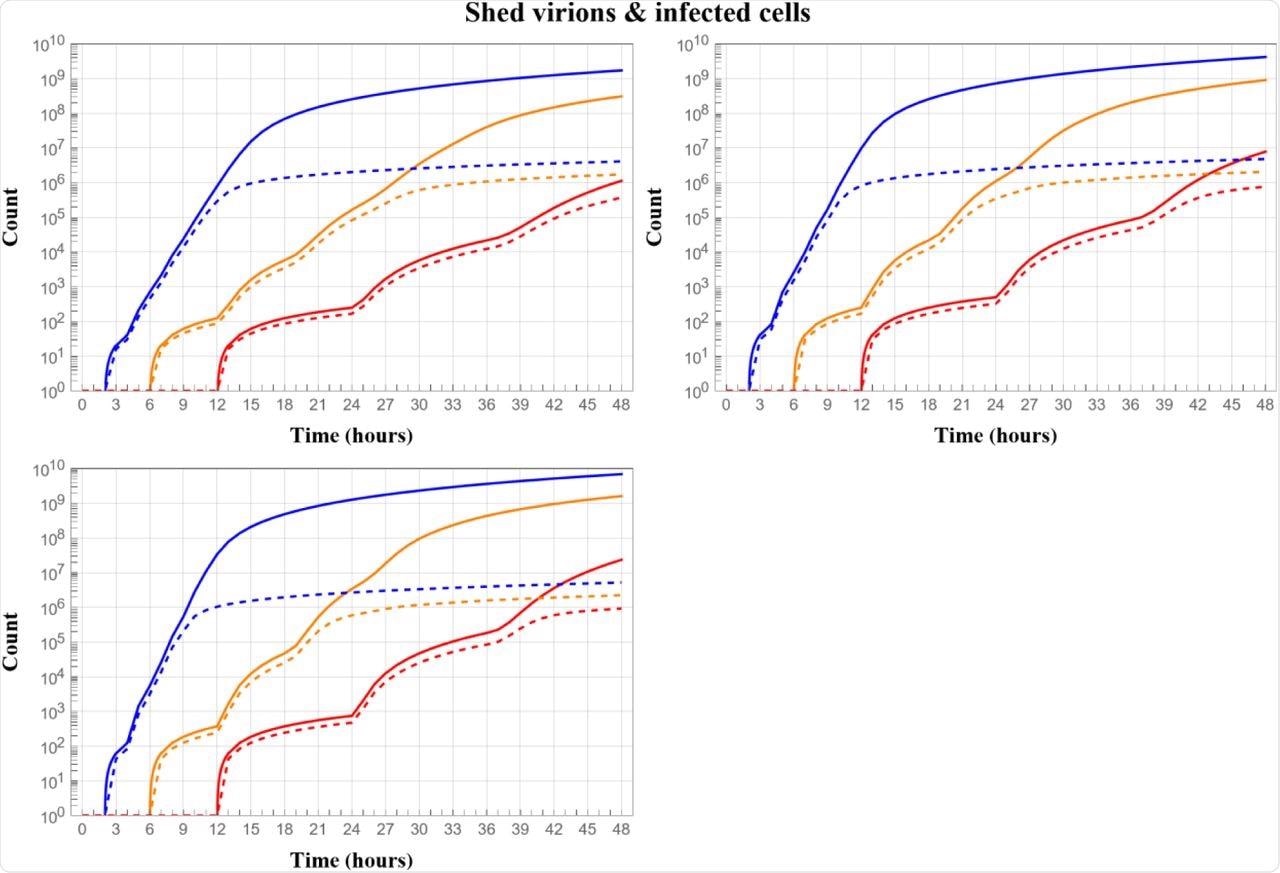 The dynamic evolution of viral load (solid curves) and total infected cells (dashed curves) over two days from a single cell starting from the moment of infection, comparing outcomes for eclipse phases of 12 (red), 6 (orange) and 2 (blue) hours, and for shedding rates of infected cells per day post eclipse phase of 500 (top left), 1000 (top right), 1500 (bottom left). All simulations are for fixed probability 0.2 of infection per cell encounter per sec as used in [Chen et al. 2022] for the alpha variant.

The researchers only focused on the nasal passage in this study. In the immediate 24-48 hours after infection of one nasal epithelial cell at the nasal route's entrance, the model outputs the viral load within the nasal passage, flux into the nasopharynx, and the number of infected nasal cells. The researchers simulate the results in viral load and infected cells for these three mechanistic impacts over a range of kinetic parameters.

Shortening the eclipse phase, which is the time between virus cellular uptake and commencement of infectious viral replication and shedding, alone can generate three to five orders of magnitude greater viral load within two days after initial infection, according to the model simulations. Increased viral replication rates by an infected cell can only result in a one-order-of-magnitude increase in viral load; however, increased cell infectability has no effect and lowers the viral burden.

After completing her Bachelor of Science in Toxicology with two minors in Spanish and Chemistry in 2016, Benedette continued her studies to complete her Master of Science in Toxicology in May of 2018.During graduate school, Benedette investigated the dermatotoxicity of mechlorethamine and bendamustine; two nitrogen mustard alkylating agents that are used in anticancer therapy.