They are typically taken by the health conscious with the hope of adding years to life.

But a study found taking supplements has little effect and only nutrients found in foods can lower your chances of death.

In fact, some supplements – such as calcium and vitamin D – were actually associated with a higher risk of cancer.

Experts suggest the findings add to growing evidence that supplements cannot be used as ‘insurance’, and that diet and lifestyle are key to health. 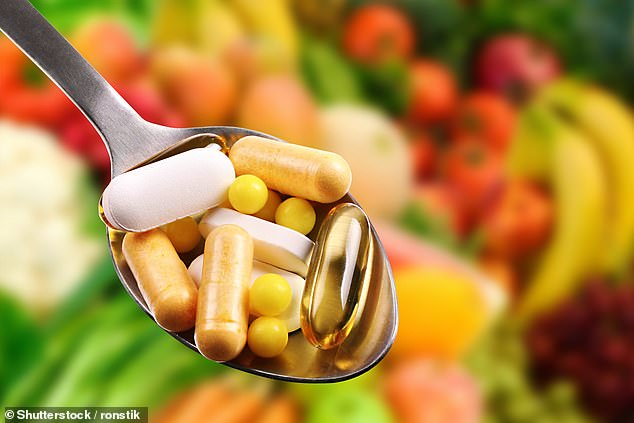 The study, which focused on data from more than 27,000 US adults, found certain nutrients in food – but not supplements – were generally linked to a lower risk of both all-cause and cancer death.

Researchers from Tufts University compared the intake of a range of nutrients with rates of death from all causes, cardiovascular disease and cancer.

They showed that adequate consumption of vitamins A and K, as well as magnesium and zinc, reduced the risk of death.

But this finding only applied to nutrients in food, not supplements.

Scientists said people could unwittingly be putting themselves in greater danger by taking calcium supplement doses higher than 1,000 milligrams per day.

This was associated with a 53 per cent greater risk of death from cancer, although the relative risk remained small.

They found no evidence of an association between calcium in food and cancer death.

Lead scientist Dr Fang Fang Zhang, said: ‘It is important to understand the role that the nutrient and its source might play in health outcomes, particularly if the effect might not be beneficial.

‘Our results support the idea that, while supplement use contributes to an increased level of total nutrient intake, there are beneficial associations with nutrients from foods that aren’t seen with supplements.

Iron is important for the production of red blood cells, which carry oxygen around the body.

A lack of iron can cause anaemia.

The Department of Health states most people should be able to get all of their iron intake from their diet.

How much iron do people need a day?

Women with heavy periods, or those who are pregnant, may require supplements.

Iron intakes of more than 20mg a day can lead to constipation, nausea, vomiting and abdominal pain.

Very high doses can be fatal, particularly in children, therefore iron supplements should be kept out of youngsters’ reach.

‘This study also confirms the importance of identifying the nutrient source when evaluating mortality outcomes.’

Sales of supplements have grown by six per cent in five years, with Britons spending an estimated £442million on them in 2018, according to market research group Mintel.

Roughly 34 per cent of British people take health supplements daily, while the figure in the US is closer to the 50 per cent mark.

Debate as to their effectiveness has raged for years with many studies showing a supplement does not mirror the effects of when taken naturally.

In this study, participants were asked whether they had used any dietary supplements in the previous 30 days.

Those who reported supplement use were asked the product name, frequency and duration for each nutrient.

In addition, the researchers found dietary supplements had no effect on the risk of death in individuals with low nutrient intake.

Unnecessary consumption of vitamin D supplements by individuals who were not deficient in the vitamin might increase the risk of death from any cause, the researchers found.

Professor Judy Buttriss, of the British Nutrition Foundation, said the findings added to a growing body of evidence that micronutrient supplements do not reduce the risk of death.

She said: ‘Research on diet is increasingly looking at the effects on health of dietary patterns, rather than isolated nutrients, and it’s clear that it’s the diet as a whole and not single nutrients in isolation that can have the greatest beneficial impact on health.’

Professor Tom Sanders, of King’s College London, said: ‘People who self-medicate with supplements are often the “worried well” or those who have health problems.

‘Furthermore, there are those who eat poor quality diets but take a supplement as an insurance policy.

‘You can’t turn a bad diet into a good diet with handful of pills.’

Professor Hugh Montgomery, of UCL Institute Human Health and Performance, said: ‘The growing message is routine vitamin supplementation offers little if any benefit to health and may cause harm.

‘Meanwhile, it is clear diets high in these components are healthy.

‘Supplementing some vitamins and/or minerals can benefit those at risk (e.g. folic acid in pregnancy) or who may benefit for specific medical reasons (such as osteoporosis).

‘However, in general terms, those otherwise healthy may do better overall to concentrate on consuming a healthy diet rich in vegetables, nuts, seeds, whole grain and fruit than to spend money on supplements.

‘The latter are not generally an effective substitute for, or supplement to, the former.’