From sage and elderberry to vegetable soups with a kick: Nutritionist reveals the five natural ways to boost your immune system this flu season

It’s the time of year where you can’t escape coughing and nose-blowing all around you.

There are a few reasons why some people are more likely to pick up a colds this time of year, such as commuting, giving your sick friend a hug or simply forgetting to wash your hands before lunch.

But our immune system’s resilience can be boosted in some natural ways, says London-based nutritionist, Rick Hay.

In a piece for Healthista, he reveals how you can avoid a miserable winter illness. 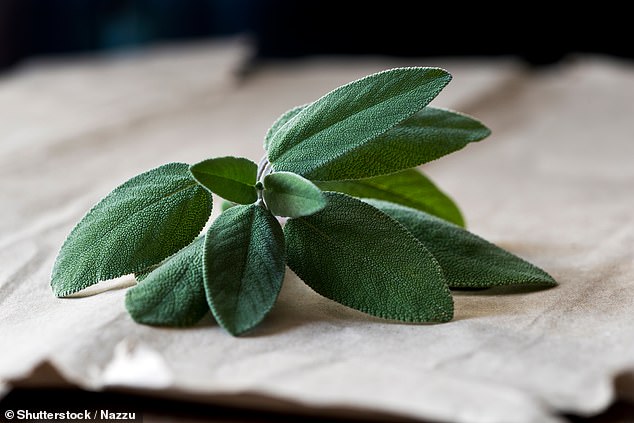 For centuries, herbal remedies have been used traditionally to treat a range of conditions to help strengthen and heal the immune system.

Sage in particular is known for its antibacterial properties, antioxidant effects and anti-inflammatory properties, traditionally believed to enhance memory.

Sage is also known to help ease congestion and respiratory issues and is often used in homemade remedies to help with cold and flu symptoms.

The botanical elderberry is also used traditionally used to strengthen the respiratory tract and helping fevers as well as for promoting healthy skin.

Historically, elderflowers were used externally as a wash, infused oil, cream or salve for red, inflamed or itchy skin and can also be used topically to treat rashes, sunburn and rosacea.

A study investigating the effects of oral elderberry syrup for treating flu infections saw 60 patients aged 18-54 years suffering from flu-like symptoms for 48 hours or less receive 15 ml of elderberry or placebo syrup four times a day for five days, and record their symptoms.

The study found that symptoms were relieved on average four days earlier and the use of rescue medication was significantly less in those receiving elderberry extract compared with placebo. 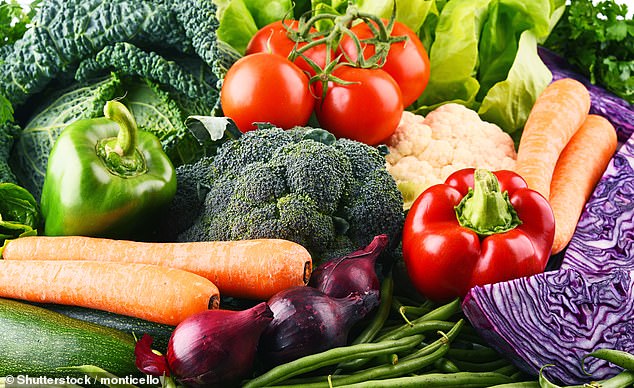 Brightly coloured foods including fruit and vegetables are coloured because they contain vitamins and minerals. These are key for helping the immune system

Mr Hay said: ‘The deeply coloured pigments in the foods are often where their therapeutic action resides.

‘So if it stains your fingers and hands it’s generally good for your immune system.’

Colourful foods also contain phytonutrients. These are natural chemicals found in plants that can help maintain immune function and research suggests that they may also have a part to play in helping to prevent lifestyle related diseases such as heart disease and even cancer.

And it won’t take long to see benefits either. A study examined the effects of supplementing fruit and vegetable extracts over a four week period.

Results showed that the phytonutrients in these supplements improved antioxidant levels within the very first week.

Not only are soups beneficial in warming you up during the colder months but they are an excellent way of upping your nutrient intake.

Filling your soups with plenty of nutrient rich vegetables will also increase your phytonutrient consumption, helping to maintain your immune function.

For an extra immune system boost, add herbs and spices such as garlic, oregano, ginger and turmeric as these have antibacterial and antiviral properties.

These herbs and spices also have thermogenic properties which means that may help to boost metabolism, circulation and fat burning. 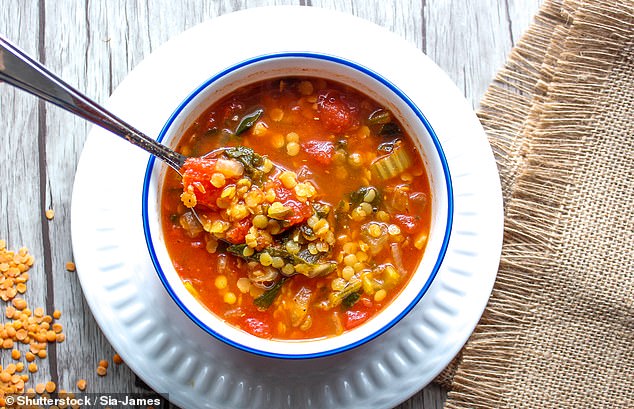 The herb oregano contains two compounds called thymol and carvacrol which are responsible for its anti microbial and anti fungal effects.

The spice saffron contains the compound safranal which could provide relief from a low mood.

Adding garlic – as much as you (and those around you) can handle – won’t only add flavour but will also provide antibacterial properties to support immune health and keep those persistent colds at bay.

Some studies are even indicating that garlic can increase the activity of natural killer cells, which are immune cells that are involved in containing and controlling viral infections.

Fresh fruit and vegetable juices will also help to increase your antioxidant intake.

The health benefits of the coloured pigments found in foods such as beetroot, peppers and leafy green vegetables help with nitric oxide production which has been proven to aid sports performance and cardiovascular health.

Leafy greens also contain magnesium which helps the nervous system and in turn, leads to a healthier immune system.

Nitric oxide (NO) is a molecule that plays an important role in many functions in the body such as blood flow, mitochondrial respiration and platelet function (platelets are tiny blood cells that help your body form clots to stop bleeding and your mitochondria are the powerhouses in your cells where energy is made). 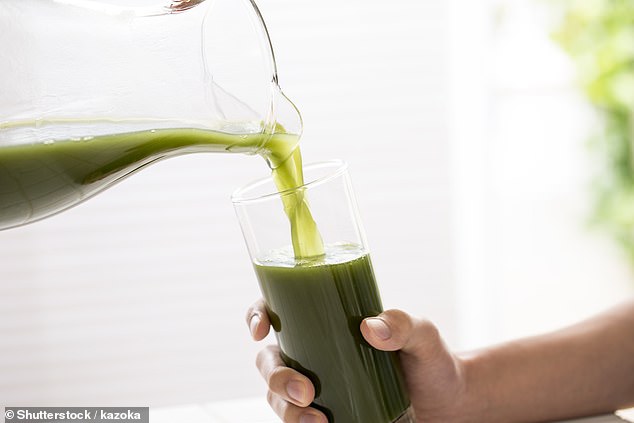 It has been suggested that an increase in nitric oxide production may enhance oxygen and nutrient delivery to active muscles, improving tolerance to physical exercise therefore improving your immune system health.

Carrots are rich in beta carotene (an antioxidant) which is converted in the body to vitamin A, which may strengthen your mucous membranes and improve respiratory system health.

Additionally the fibre found in fruits and vegetables will also help your gut health and a healthy gut has been shown to enhance immune function.

DO YOU NEED TO TAKE SUPPLEMENTS?

Most people don’t need to take vitamin supplements and are able to get all the vitamins and minerals they need by eating.

Many people choose to take supplements, but taking too much or taking them for too long could be harmful.

The Department of Health recommends certain supplements for some groups of people who are at risk of deficiency. These are described below:

Your GP may also recommend supplements if you need them for a medical condition. For example, you may be prescribed iron supplements to treat iron deficiency anaemia.

In terms of supplementation, vitamins A, C and D can help to keep the immune system strong which is particularly helpful during the winter months.

Vitamin A is required to maintain immunity and is a key micronutrient needed for combating infection, supporting the integrity and barrier defence of our mucous membranes.

Vitamin C can be found in citrus fruits, red or green peppers and vegetables such as broccoli and you probably know it’s beneficial to the immune system at high doses.

Therefore if you find yourself struggling to consume vitamin C from food alone and are wanting to lessen cold symptoms, it may be an idea to supplement with vitamin C to decrease the duration of cold symptoms by one to one and a half days.

Last year, a report published in the journal Nutrients concluded that, ‘Vitamin C appears to be able to both prevent and treat respiratory and systemic infections by enhancing various immune cell functions at levels of 100-200mg a day’.

Smoking and stress can deplete vitamin C levels, so if you are a smoker or find your stress levels are rising, Mr Hay advises that you increase your vitamin C levels with supplementation.

Where vitamin D is concerned, this time of year especially, we know that the sun can sometimes go days without being seen and when it comes to immunity, it’s super important.

In fact, last year, a major global study published in the British Medical Journal suggested that adding more vitamin D to your diet could significantly cut NHS costs, by reducing the risk of colds, flu and other dangerous respiratory infections such as pneumonia and bronchitis.

The study, undertaken by Queen Mary University of London, reanalysed data from 25 clinical trials involving around 11,000 people from 14 countries.

The authors suggested their work settles the question of whether an increase in colds and flu in the winter is partly due to a vitamin D deficiency in the winter.

Taking a supplement might be needed as large proportions of the UK reportedly are deficient in vitamin D. Foods rich in vitamin D include egg yolks, fatty fish such as mackerel and salmon and fortified cereals.

Your vitamin D levels can be determined by a blood test from your GP or can be done via private testing, as well as finger print testing which can be ordered online from reputable companies.

Government recommendations for vitamin D are 10 micrograms (600iu) per day to avoid deficiency, however higher levels can be supplemented, especially during the winter months and in those with a higher risk of deficiency.

The research suggests that vitamin D in the form of D3 is the more effective from of this nutrient.

Additionally, supplementing with an emulsified vitamin D supplement, as it is a fat soluble nutrient, can further help to maximise absorption, especially for those with digestive issues.

This article was originally published on Healthista and reproduced with its permission.

WHERE CAN YOU GET THE FLU VACCINE IN THE UK?

Flu can be a serious illness. If you become very ill with it, it can cause complications such as pneumonia, kidney failure and inflammation of the heart, brain or muscle.

People at most risk of serious illness or death if they get flu are offered the vaccine on the NHS. Ideally you should have this before the end of December, when flu peaks (it takes around two weeks after the jab for antibodies to develop completely).

At-risk groups include anyone aged 65 and over, people living in long-stay residential care homes, carers and pregnant women.

The vaccine is also offered to anyone aged six months to 65 years with certain conditions, such as diabetes.

It is available via your GP’s surgery.

All children aged two to eight (on August 31, 2017) are also offered the vaccine as a nasal spray. The UK introduced the child vaccination programme in 2013. Last year, the vaccine had 66 per cent effectiveness. Australia does not have a similar programme.

If you do not qualify to have the jab on the NHS, you can pay to get it at a pharmacy.

Older children who fall outside the NHS scheme can get the nasal spray vaccine from some pharmacies such as Well (£23 for those aged between two and 18; this may involve a second dose at least four weeks later for another £23) and the injection for those 12 and over for £9.