• Years of unhealthy eating and poor sleep led Matthew Gilbert’s weight to climb, topping out at nearly 270 pounds.
• After committing to a daily walk, he immediately saw benefits, including steady weight loss and improvements to his mood.
• Eventually, he graduated to more intense workouts and started eating out less, which led to a dramatic 70-pound weight loss transformation.

Matthew Gilbert thought he was having a panic attack. The 31-year-old project manager was sitting at his desk in Houston, Texas, one morning when all the stress of his job and personal life seemed ready to run him down. “I went to the doctor and they prescribed me pills for anxiety, stress, and something to help me sleep,” he says. He wasn’t enthused about taking medication for his problems. He thought there might be a better way.

He faced a reckoning—one a long time coming. Since he was 17, he’d started gaining weight. He went straight to work at a desk job; he wasn’t active like he used to be. Slowly, at first, the pounds crept up. He spent long hours at work, eating at restaurants for every meal. His sleep habits were a mess, and he was a ball of stress. By the time he was 28, he was topping 267 pounds.

The next day, after seeing a doctor, he skipped lunch with his co-workers and went for a walk on a trail near his office. He came back reinvigorated, with a positive mood he carried into the afternoon. So he started taking a walk or jog every day at lunch. “I noticed a drastic change almost immediately in my overall mood, sleep schedule, productivity and even started getting comments from my employees about what I had changed,” he says.

After a couple months he joined a gym, cobbling together his own 45-minute workout. He convinced some co-workers to join him, and they built routines based on ideas they found online. “I was able to get our company to compensate for the gym memberships,” he says, “after I explained how much more productive I had personally been after living a healthier and more active lifestyle.” 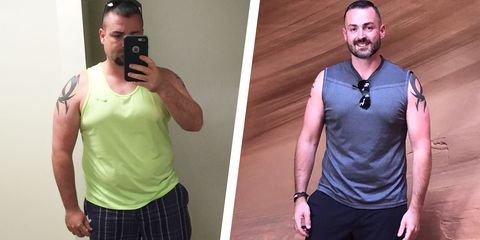 In the first year alone, he lost about 40 pounds. Then he plateaued, changing jobs and falling off his habit of everyday exercise. He started to backslide, but his new partner, Sarah, introduced him to spin class. He joined a new gym and went to a boot camp class; he started mixing up his routine with different workouts around the area, from boxing to indoor running to HIIT. The variety helped him learn what worked best for him. And his new partner helped him stay on track, and start working on his diet.

He pushed through his 220-pound plateau and hit 185 this May. “More important than the number that I see on the scale is that overall I feel less stress and anxiety,” he says. “I feel very energized—my caffeine intake has decreased dramatically—and I am not always hungry.” He’s found a sustainable diet and exercise regimen that’s a lifestyle—not just something he puts himself through to hit a goal, only to later backslide.

Now he’s motivated to share his story with others: “My goal is to keep doing what I am doing,” he says, “helping others, share my story on a larger platform, and motivate as many men who are in the situation I was in to be in the situation I am in now.”