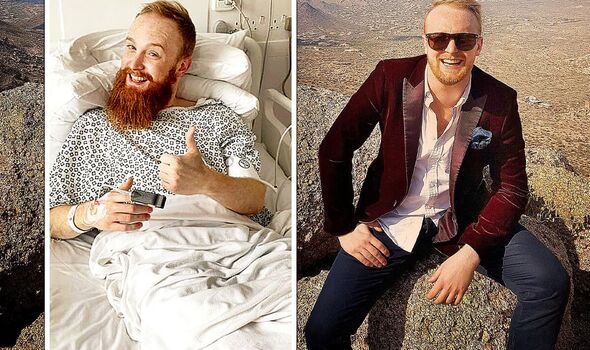 For more than a decade, Pete had suffered intense discomfort every time he ate or drank. By the middle of last year he was vomiting after eating. It led to him losing weight, becoming depressed and lacking energy.

“I’ve never been a foodie or someone who enjoyed eating as it was usually followed by intense pain,” says Pete, 33, who is a guitarist and singer in The London Essentials, a five-piece acoustic band who perform at private parties around the world.

“Over the years, doctors said it was acid reflux and I was given pills for that, but they did nothing. All my life I’ve been labelled a fussy eater.”

Pete had become used to experiencing chest pain while eating or dashing to the toilet during meals if he could not keep food down. But in May last year his symptoms worsened.

“I immediately noticed there was no pain when eating,” says Pete. “So when I had my first bowl of soup and a roll the day after the procedure, I cried because it felt so much better.”

“Three weeks later, I was confident enough to go out and eat a steak, which felt amazing.”

The treatment is available on the NHS, including at hospitals in London, Leeds and Portsmouth.

“For years I largely ignored my symptoms before I reached a real crisis,” says Pete. “Not eating was absolutely miserable but now I’ve regained my weight and energy, and everything looks much brighter.”