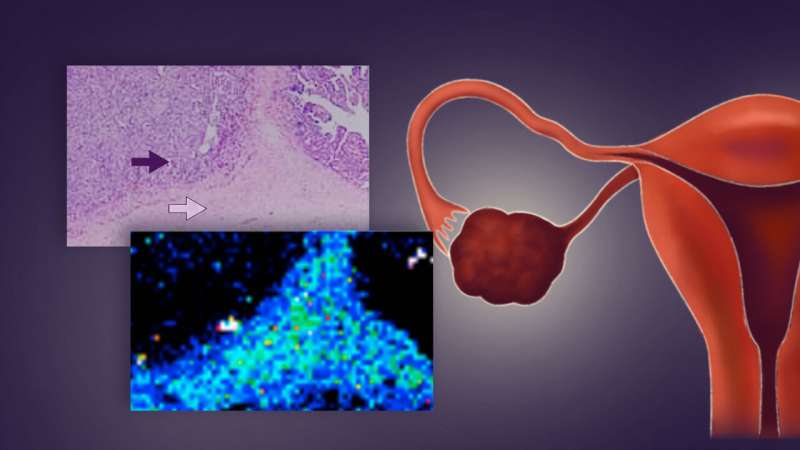 A team of researchers from Japan has discovered that the distribution of platinum within a tumor following platinum-based chemotherapy treatment of ovarian cancer may predict whether the tumor will be resistant to further treatment. The research could offer ways to manage treatment for women whose tumors may be resistant to further platinum-based chemotherapy.

One of the biggest problems with treating ovarian cancer is completely removing the cancer surgically. To facilitate easier surgical removal, patients are given platinum-based chemotherapy drugs early in treatment to shrink the tumor. These drugs introduce platinum into the DNA of the cancer cells making up the tumor, which makes the DNA difficult to read and causes the cells to die.

However, if the tumor is not completely removed, it takes advantage of the body’s weakened immunity and comes back, often growing faster than before.

Because the tumor has experienced the treatment before, it develops increased resistance to it, in the same manner that bacteria can become resistant to antibiotics. Repeated exposure leads to 80% of women developing ovarian cancer tumors that are resistant to further treatment. Therefore, a technique that would allow doctors to tell if the patient will develop resistance to these commonly used drugs would make this process a lot more effective.

A team of researchers led by Professor Hiroaki Kajiyama, Assistant Professor Nobuhisa Yoshikawa, and graduate student Kaname Uno of the Nagoya University Graduate School of Medicine reported that the answer to this problem lies in the distribution of platinum in the tumor after treatment. Their findings were published in Scientific Reports.

“We showed that there were two different patterns of platinum distribution within the tumor tissue. The difference in the distribution was shown to be significantly correlated with prognosis, suggesting that it is possible to discriminate between platinum-resistant and platinum-sensitive tumors before they recur,” explains Kajiyama. “Using this method, early diagnosis of platinum resistance and selection of appropriate postoperative anticancer therapy for patients as well as a new ovarian cancer treatment strategy are possibilities.”