If patients were taking drugs in the latter class – such as Bumex and Edecrin – an estimated 3,100 cardiovascular problems like heart attacks and strokes could have been avoided, according to Columbia University scientists.

About one in three Americans has high blood pressure and many take medication to control it and keep their hearts from having to work to hard, raising risks of life-threatening events.

The American College of Cardiology makes no distinctions between which of five classes of blood pressure is best for someone just starting to take the medications. 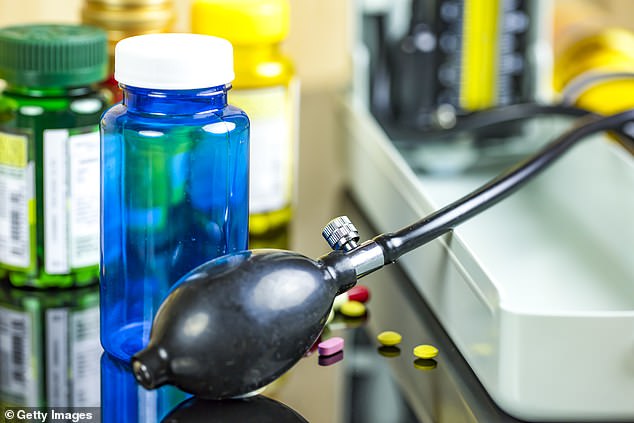 Heart disease is the number one killer of American, claiming the lives of some 610,000 Americans every year.

And the forms and complications of heart disease linked to hypertension, or high blood pressure, have been surging in recent years.

High blood pressure is most often the result of the buildup of fatty plaques in the blood vessels, narrowing these passage ways and forcing the heart to work harder to pump blood through the body.

An estimated 75 million adults have hypertension, according to the Centers for Disease Control and Prevention (CDC).

Genetic factors raise certain groups’ risks for heart high blood pressure and lifestyle adjustments – like better diets, more exercise, and quitting smoking – can help bat those risks back down, but at some point medication is necessary to help prevent heart disease in many patients.

There are five classes main classes of blood pressure medication patients are typically started on:

They’re all considered safe and effective and the ACA leaves it up to doctors to decide which they think their patients should take.

ACE inhibitors are the most popular class of drugs – but not the most effective, according to the new Columbia University study.

They found those who started diuretics had 15 percent fewer heart attacks, strokes and other major cardiovascular events.

Plus, the people who took ACE inhibitors were more likely to have side effects like cough, diarrhea, constipation, erectile dysfunction, dizziness, weakness or fatigue, compared to those on thiazide diuretics.

Taken together, the researchers suggested that if more Americans switched to thiazidine, not only would their quality of life be better in the absence of some of these side effects, but as many as 3,100 heart attacks, strokes and other cardiovascular events might be avoided.