Many vaccines have been developed to boost immunity against severe acute respiratory syndrome (SARS-CoV-2). However, a major concern during vaccine rollout is storage, especially in countries where specialized freezers are scarce.

"The vaccine candidates elicit both neutralizing antibody and cellular immunity with a balanced T helper (Th) type 1 and 2 response in an outbred mouse model. The results obtained in this model may thus inform future vaccine development in animal models more closely related to humans."

Future studies in humans could help in developing a durable coronavirus vaccine that does not require refrigeration. This could potentially increase mass vaccination efforts and provide greater immunity to a virus that has mutated in several countries worldwide.

Researchers tested vaccine immunity in 7- to 10-week old male and female Swiss Webster mice. They were given through the muscle, SARS-CoV-2 spike proteins ectodomain SdTM or SdTM2P alone or in combination with 1 mg of CoVaccine HT adjuvant treatment starting on day 0 and day 21. The control received only the adjuvant treatment.

The researchers investigated antibody levels in serum samples on the 7th, 14th, 28th, and 35th day after vaccination. 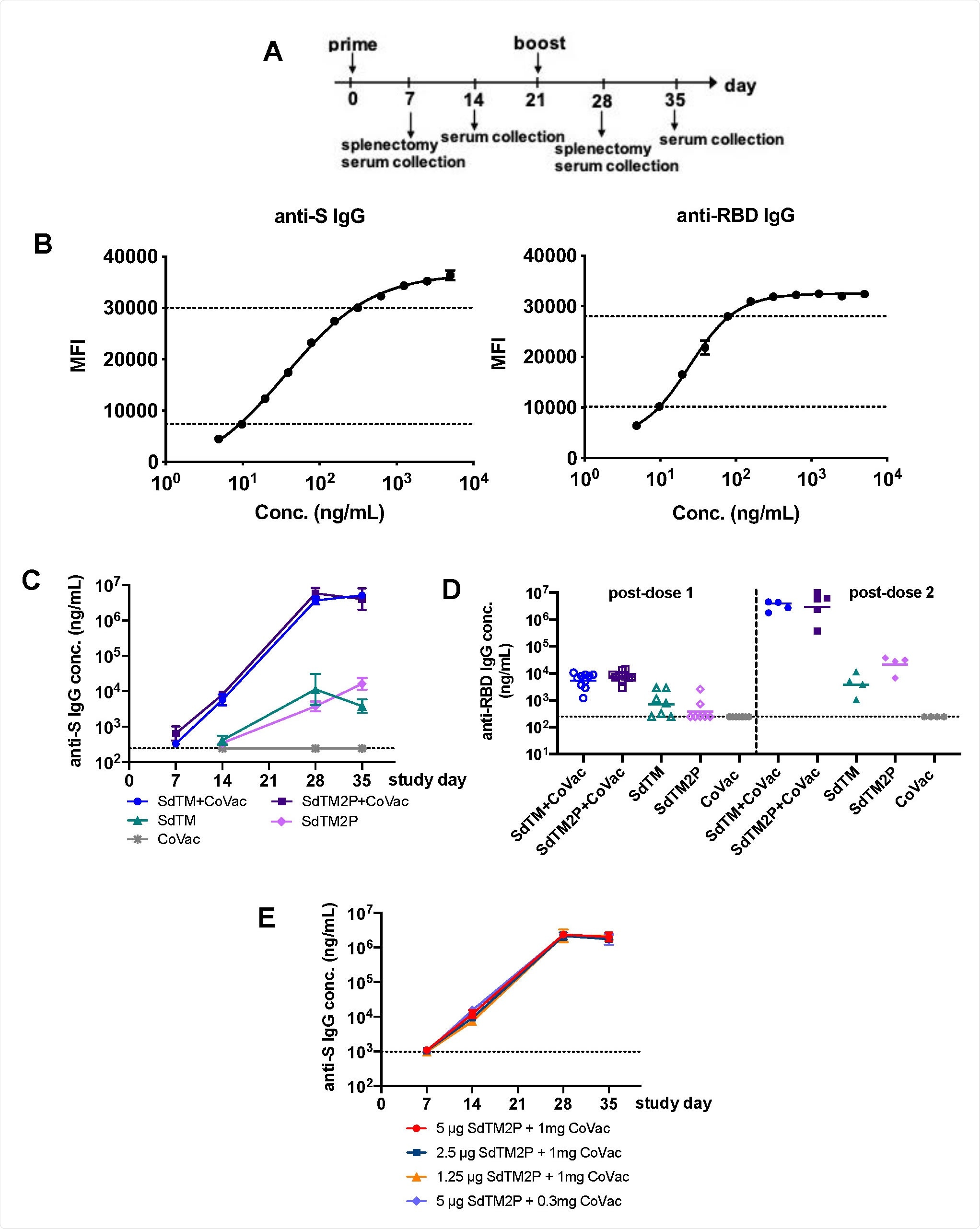 IgG antibody responses to recombinant SARS-CoV-2 S proteins. (A) Groups of Swiss Webster mice (n=7 or 15) were immunized with one or two doses of recombinant S proteins with or without CoVaccine HT™ (CoVac) adjuvant at a 3-week interval. Sera were collected 1 and 2 weeks after each immunization (days 7, 14, 28, and 35), and spleens were harvested 1 week (day 7 and 28) after each immunization. SARS-CoV-2 S-specific IgG titers were measured by a multiplex microsphere immunoassay (MIA) using SdTM2P and RBD-F coupled beads. (B) The purified anti-S antibody was diluted to concentrations in the range of 4.8 to 5000 ng/mL and analyzed by MIA as a standard (as described in the Materials and Methods). Mouse sera were assayed along with the antibody standard and the IgG concentrations was interpolated from the standard curves using a sigmoidal dose-response computer model (GraphPad Prism). The dotted lines denote the top and bottom of linear range that were used to interpolate antibody concentration (C) The anti-S and (D) anti-RBD antibody titers in sera from mice immunized with SdTM or SdTM2P (purified by hACE2 AC) with or without adjuvants or (E) anti-S antibody in sera of mice administered different dosages (5, 2.5, or 1.25 μg) of SdTM2P (purified by mAb IAC) with adjuvant (1 or 0.3 mg) are expressed as IgG concentrations (ng/mL). The dotted lines in panels C to E indicate the bottom of linear range of the standard curve.

Immunity observed in all mice administered the combination treatment

Administering two doses of the combination treatment elevated immunoglobulin antibodies were also specific to the spike protein's receptor-binding domain, which is the target for neutralizing antibodies.

Vaccine-induced antibody levels were not altered by lower doses of either the spike protein ectoderm (2.5 or 1.25 micrograms) and the CoVaccine HT adjuvant (0.3 milligrams).

Neutralizing antibody titers were also measured and were higher in mice that received the combination vaccine.

Antibody titers were dose-dependent. There was an observable trend of decreased neutralization titers when mice were given lower dosages of SdTM2P proteins.

However, overall effectiveness doesn't appear to be changed by a lower dose.

"Of note, the serum PRNT50 titers of mice receiving a lower amount (0.3 mg) of CoVaccine HT were comparable or even higher than those of mice given 1 mg of adjuvant, indicating that the optimal vaccine formulation may be achieved using lower dosages of adjuvant. The results indicate that as little as 2.5 mg of S protein antigen with 0.3 mg of adjuvant might be sufficient to induce potent neutralizing antibody responses."

The researchers evaluated the balance of Th1 and Th2 immune responses because an imbalance of Th2 has been associated with vaccine-associated enhanced respiratory disease. They compared the levels of S-specific IgG2a/b and IgG1 to assess the ratio between Th1 and Th2.

Results showed higher ratios of IgG2a/IgG2b in mice given the combination vaccine, suggesting the presence of Th1 immune responses.

Although, decreasing the amount of adjuvanted SdTM2P proteins or a lower amount of 0.3 milligrams of CoVaccine HT appeared to lower the amount of IFN-g secreting cells. However, the researchers say this finding was not statistically significant.

Jocelyn Solis-Moreira graduated with a Bachelor's in Integrative Neuroscience, where she then pursued graduate research looking at the long-term effects of adolescent binge drinking on the brain's neurochemistry in adulthood.