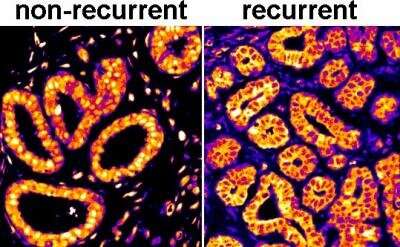 A new tool combining traditional pathology with machine learning could predict which breast cancer patients actually need surgery. The technology, reported in the November issue of American Journal of Physiology—Cell Physiology, could spare women from unnecessary treatments, reduce medical expenses, and lead to a new generation of drugs to stop breast cancer recurrences.

Ductal carcinoma in situ (DCIS) of the breast, an early form of disease also known as stage 0 breast cancer, is a diagnosis that only sometimes leads to invasive breast cancer. But only some patients need surgery, chemotherapy and/or radiotherapy, and the rest could be sent home. Predicting the outcomes of patients with early forms of cancer has been a major scientific problem for decades.

Professor Howard Petty and Ms. Alexandra Kraft, his research assistant, both of the University of Michigan, have just reported a solution to this diagnostic dilemma. The new technology was tested on DCIS patient samples donated to research over 10 years ago supplemented by their current clinical histories.

“Typically, patients with pre-invasive cancers, such as DCIS, are treated very aggressively,” says Prof. Petty. “In the case of DCIS, this means partial or total mastectomies…but we know from other work that more than half of these patients will not experience invasive disease.”

The method relies upon the newly reported discovery that, in both DCIS cases that are destined to recur and metastatic breast cancer, cells reorganize certain enzymes into ‘metabolic platforms’ just beneath the outer membrane of these dangerous tumor cells. “This allows the enzymes to operate with high efficiencies, like an assembly line at a factory,” Prof. Petty says. That efficiency is what makes those cancers so dangerous. Petty theorizes that the enzyme products produced by these cellular factories promote tumor cell invasiveness and simultaneously deflect many forms of chemotherapy and radiotherapy.

To predict which DCIS cases lead to such assembly lines, Petty and colleagues tag biomarkers within patient samples then photograph the biomarkers with a sophisticated camera—similar to those used in astronomy. The digital images are then uploaded into a cloud computing platform for analysis.

Using this approach, the researchers correctly predicted cancer recurrences and non-recurrences 91% of the time, with only 4% false negatives. Further improvements are on the way.

The authors suggest that this tool will reduce the overdiagnosis of life-threatening DCIS. The technique may allow scientists to pharmaceutically disrupt metabolic platforms, thereby blocking tumor invasiveness, enhancing chemotherapy and radiotherapy, and stopping recurrences. “This tool may also be useful in predicting the outcomes of other pre-invasive lesions and in predicting which patients will respond to specific therapeutic interventions,” Prof. Petty says.