Epileptic girl, three, whose family couldn’t get medicinal cannabis on the NHS is ‘saved’ after Canadian firm gives her the drug for free meaning she no longer suffers 30 seizures a day

A three-year-old girl with severe epilepsy is now being given medicinal cannabis for free by a Canadian company because the NHS won’t give it to her.

Jorja Emerson, from Dundonald in Northern Ireland, has been given cannabis oil by her father since December last year after it was legalised in the UK.

But the family has faced a gauntlet trying to get their hands on the medicine, which reportedly cuts her number of daily seizures from 30 to as few as three.

Her father Robin, 33, claims the NHS won’t prescribe her the medicine she needs so Canadian firm Aphria has staged a ‘lifesaving’ intervention. 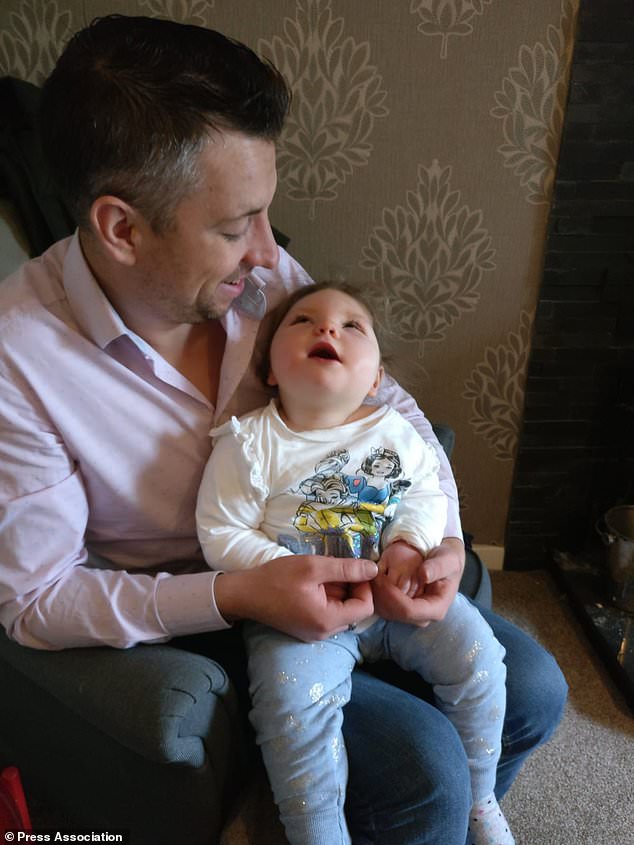 Jorja Emerson will be given the treatment free of charge by Canadian medical cannabis producer Aphria, according to her father, Robin 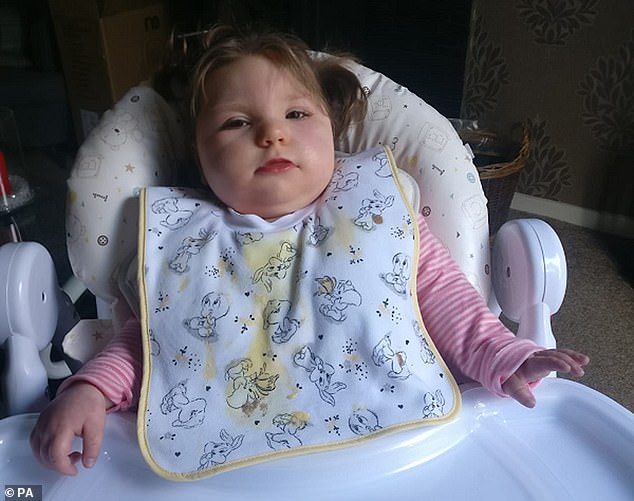 Jorja has a severe form of epilepsy which, her family say, can cause as many as 30 seizures per day without cannabis medicine, which reduces them to three or four

Jorja has epilepsy so severe her family has feared for her life but say cannabis oil – they had been using a drug from a firm called Tilray – improves her condition.

Mr Emerson has reportedly been buying the medication at a cost of £1,000 per month since December after getting a prescription through a private doctor.

And he has to travel to London to pick up the prescription from the pharmacy which agreed to provide it.

He said the family has spent around £30,000 on Jorja’s healthcare since she was diagnosed in 2017, and are now struggling to cover the cost.

However, Aphria, a medicinal cannabis company based in Nanaimo, Canada, has reportedly been moved by the toddler’s plight and is sending the drug for free.

It is unclear how long the company has agreed to supply the medicine for.

Mr Emerson said: ‘Until this is sorted, families will have to continue travelling abroad to obtain medicine for their children illegally or, like me, go private to get help for our children.

‘Aphria have done what the NHS should have done and put Jorja first.

‘The team in Canada are full of emotion knowing that they have saved my daughter’s life.’

Home Secretary Sajid Javid announced the policy change after months of pressure from the parents of children with life-threatening epilepsy. 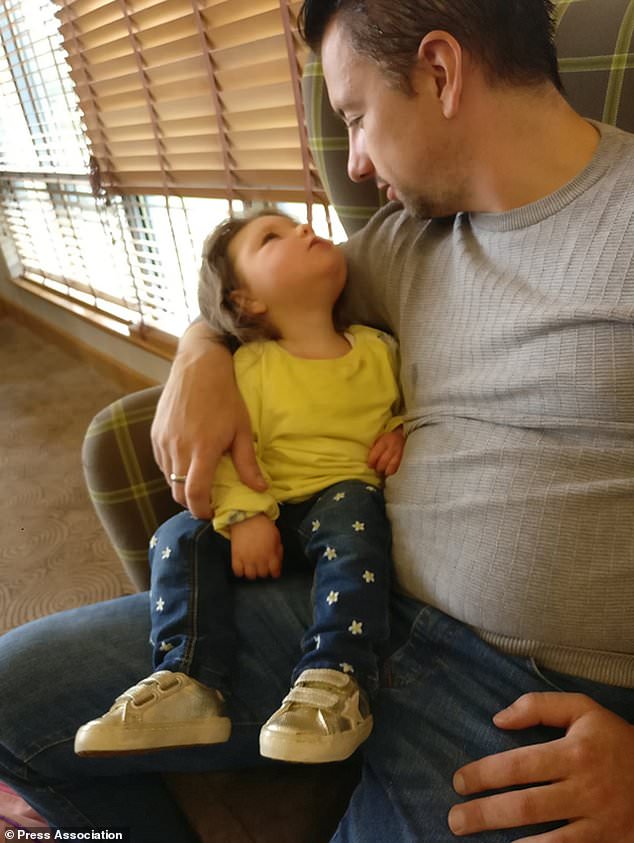 Jorja Emerson’s family were reportedly having to pay around £1,000 per month to get a private supply of cannabis oil to keep her condition under control 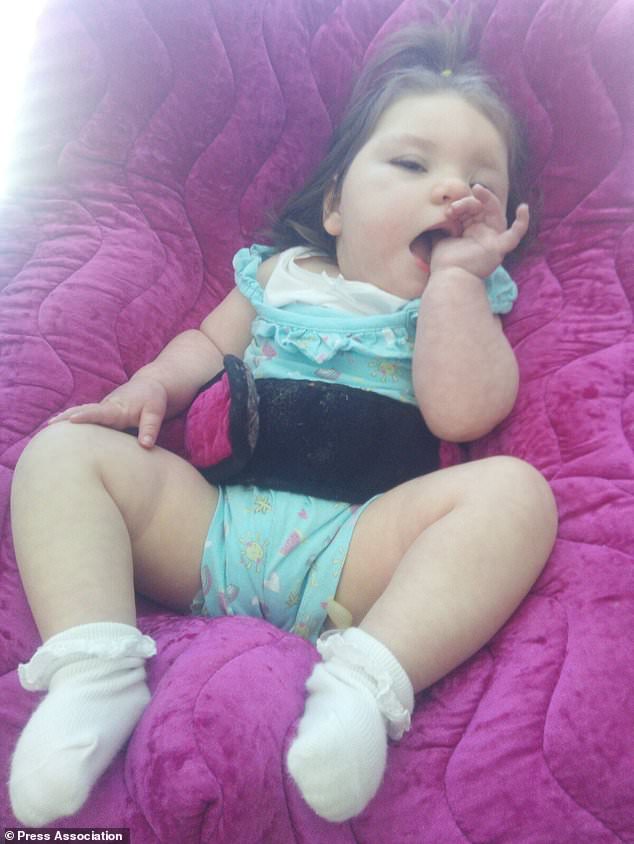 Despite the law change access to the medicines has not been a smooth ride, according to parents and experts.

It can only be prescribed by specialist doctors and, a professor at Newcastle University said in February, the medical community is being ‘overcautious’.

Mike Barnes, an expert of neurological rehabilition, told the British Medical Journal: ‘Not one patient has benefited from a cannabis prescription on the NHS.

Royal College of Physicians and the British Paediatric Neurology Association.’

Jorja is believed to have been one of the first people in the UK to have been prescribed cannabis after the law change.

Her father has said in the past the medicine is ‘the difference between life and death’ for her.

In January he criticised the process and told The Times: ‘The process has been totally outrageous.

‘The government and the medical establishment are putting money into the pockets of drug dealers.

‘These parents are unable to get help through legal channels. A child is going to die unless this is sorted out.’

The Department of Health and Social Care has been contacted for comment.

THE LANDMARK CASE OF BILLY CALDWELL

The 12-year-old sparked a row over the medicinal status of the oil, prompting the Home Office to step in and grant his mother Charlotte an emergency licence for the product that was calming his seizures, which contained THC.

Billy’s bottles were confiscated on June 11 after Ms Caldwell brought them in from Toronto.

On the back of the cases of Billy and fellow epileptic boy Alfie Dingley, six, Home Secretary Sajid Javid called for a review into medicinal cannabis.

In a major shift of policy, he announced in July that some products containing the drug would be available on prescription in the UK from the autumn.

On the back of today’s change to the law, Ms Caldwell said she wept with joy.

‘For me what started off as a journey which was about the needs of my little boy actually turned into something, proved to be something, a lot bigger,’ she told Sky News.

‘It proved to be the needs of a nation.

‘Only relatively recently did our Government and country really start to appreciate just how many wee children and people of all ages were affected by the difficulties associated with accessing medicinal cannabis.

‘But it became clear it wasn’t just about what was perceived to be a small number of very sick children and that medicinal cannabis could make a life-changing or life-saving difference to more than a million people.’

Although thrilled by the law change, Ms Caldwell hopes regulations will be expanded to allow more people to benefit from cannabis-based treatments.

‘This is new ground for everybody. We did in a few days what successive UK governments failed to do in more than half a century and made medicinal cannabis legal,’ she said.

‘Then, as now, politicians didn’t realise the complexities involved.

‘There’s a wide range of conditions, each of which can only be treated by certain forms of medicinal cannabis.’