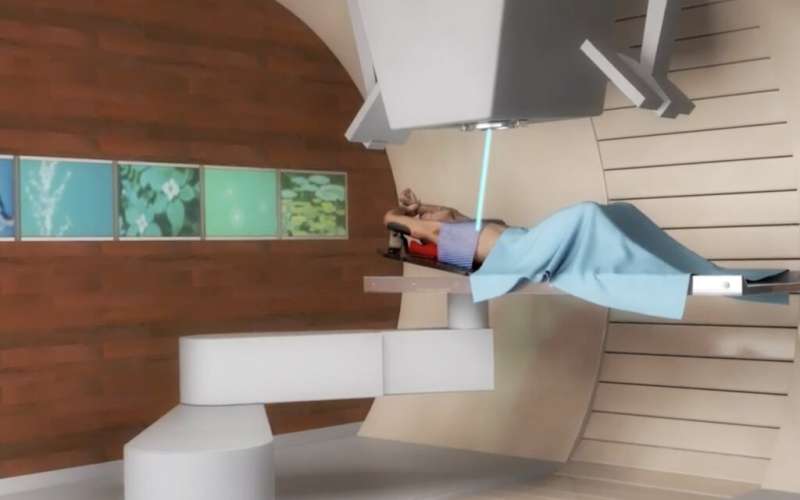 July is Sarcoma Awareness Month, bringing attention to a group of cancers that begin in the bones or soft tissues of the body. There are more than 70 types of sarcoma, including bone cancer. Treatments for bone cancer include surgery, chemotherapy, radiation, or proton beam therapy that targets the cancer.

Bone cancer is rare, accounting for just 0.2% of all cancers. Some types of bone cancer occur mainly in children, while others affect mostly adults. Common bone cancers include Ewing’s sarcoma, osteosarcoma, chordoma and chondrosarcoma. The most common sites include the pelvis, spine and base of the skull.

Whether a patient with bone cancer is a candidate for proton beam therapy depends on several factors, Dr. Ahmed says. The care team considers the patient’s overall treatment plan, age, location of the cancer, the tissue surrounding the cancer, and potential benefits and risks from a high dose of radiation.

Proton beam therapy has side effects. Some are acute, such as fatigue, changes in the skin and pain if the tumor swells and presses on nerves. Long-term side effects include permanent damage to nerves or nearby organs, bone fractures, or the possibility of developing another cancer.

Before getting proton beam therapy, patients go through a simulation, which is essentially a dress rehearsal of how the radiation will go. The purpose is to identify the proper treatment position for the therapy since the radiation is so focused and precise, Dr. Ahmed says. The team uses custom immobilization devices, getting CT scans and MRI images as they develop the patient’s radiation plan. Patients also received a small blue tattoo—about the size of a small mole—on the area of the tumor to help with positioning.

“We are very meticulous about it because we want to come up with the best radiation plan that is safe and effective for patients,” Dr. Ahmed says. “Once that process is done and the patient is ready to start, they come in daily for treatments. It’s all about precision.”