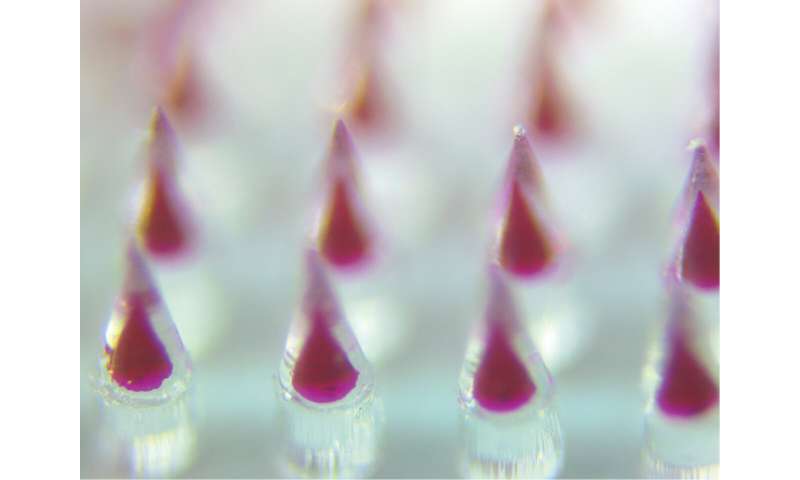 A single-use, self-administered microneedle technology developed by UConn faculty to provide immunization against infectious diseases has recently been validated by preclinical research trials.

However, these microparticles require a large needle for the injection. Additionally, there is also a limited number of the particles that can be loaded into the needle, which means only a limited vaccine dose can be delivered. Ultimately, the microparticles still require traditional injections, which are painful and produce unfavorable biohazard wastes from disposed sharp syringes.A tiny microneedle patch being held between the gloved fingers of a UConn researcher.A microneedle patch. (Courtesy of Thanh Nguyen)

“It has been recognized for a long time that there is a need to eliminate many injections in conventional vaccination process,” Thanh says. “While booster and repeated shots of vaccines are important to sustain immune-protection, these injections are associated with pain, high costs, and complicated injection schedules, causing a very low patient compliance. The issue becomes more problematic for patients in developing countries due to their limited access to health care providers. In such places, parents struggle to remember the schedule and cannot afford to repeatedly travel long distances with their children to medical centers to receive multiple booster doses of vaccines.”

As detailed in Nature Biomedical Engineering, to overcome these problems, Nguyen’s lab at UConn developed a microneedle skin patch, which only requires a single administration to perform exactly the same programmable delayed release of vaccine, as that obtained from the SEAL microparticles.

The microneedle patch avoids any painful injections, offering a significant enhancement from the perspective of patients. Extensive research has shown microneedle skin patches are almost painless, and could even be self-administered by patients at home. The patch is small, portable, and similar to a nicotine patch, which could be easily distributed to all people over the world for self-administration in the case of a pandemic such as the COVID-19 crisis to quickly create a pan-immunity at the global scale.

The microneedles have a core-shell microstructure, in which the microneedle shells are made with biodegradable medical polymer that is FDA-approved for implants, and offers unique drug-release kinetics—which allows a preprogrammed burst release of vaccine loads over a period of a few days to more than a month from a single administration. The microneedles can be easily inserted and fully embedded inside the dermal layer, thanks to the miniscule tips and smooth geometry of the needles.

To create this vaccine microneedle patch, Khanh Tran, a Ph.D. student in Nguyen’s lab and the lead author of the published work, adapted the SEAL technology to assemble different microneedle components, including a cap, shell, and vaccine core. These components are manufactured in an additive manner, similar to the approach of 3-D printing, to create arrays of core-shell microneedles over a large area.

Nguyen’s team devised several new approaches to overcome many issues of the existing SEAL technology. The key novelty of their new manufacturing process is to micro-mold vaccines into the shape of the microneedle core, and insert all of the molded vaccine cores into arrays of the microneedle shells at the same time, offering a fabrication method similar to the manufacturing process of computer chips, as shown in this video:Video Player00:0000:50

“This is a tremendous advantage, compared to the previously-reported SEAL and other traditional methods to fabricate vaccine carriers, in which vaccine is often filled slowly one by one into each polymeric shell/carrier,” Tran says.

In the preclinical trials, the researchers inserted microneedles loaded with a clinically available vaccine (Prevnar-13) into the skin of rats in a minimally invasive manner. The patch application caused no skin irritation during long-term implantation, and triggered a high immune protection response against a lethal dose of infectious pneumococcal bacteria. The results from the one-time administration were similar to that obtained from multiple injections of the same vaccine over a period of approximately two months.

“We are very excited for this achievement, as for the first time, a onetime-use and injection-free skin patch can be pre-programmed to release vaccines at different times to provide a long-term and effective immune protection,” Nguyen says. “The microneedle patch could facilitate the global effort for a complete vaccination process to eradicate dangerous infectious diseases and enable a quick distribution of vaccines. This could create a pan-community immune-protection at a global scale in the case of a pandemic such as the COVID-19,” Nguyen says.

In this regard, Nguyen and and his collaborator, Associate Professor Steve Szczepanek in the Department of Pathobiology and Veterinary Science in the College of Agriculture, Health, and Natural Resources have also received a $432,990 contract from the U.S. Department of Health and Human Services (HHS) BARDA to develop this technology.

Looking into the future, more research is needed in order to bring the microneedle patch into clinical use. While the researchers have shown the ability to use the patch for the pneumococcal vaccines, different vaccines would require different strategies for stabilization so they can be functional over a long period of implantation inside the skin.