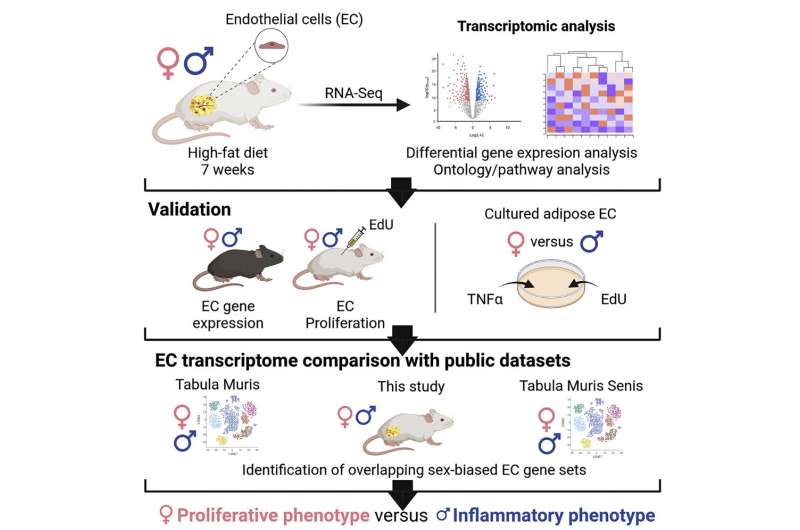 A newly published study from York University sheds light on the biological underpinnings in sex differences in obesity-related disease, with researchers observing “striking” differences in the cells that build blood vessels in the fatty tissue of male versus female mice.

Men are more likely than women to develop conditions associated with obesity such as cardiovascular disease, insulin resistance and diabetes, says York Professor Tara Haas with the Faculty of Health’s School of Kinesiology and Health Science.

“People have used rodent models to study obesity, and the diseases that are associated with obesity—like diabetes—but they’ve typically always studied male rodents, because females are resistant to developing the same kinds of diseases,” says Haas, lead on the study. “We were really interested in exploring that difference because, to us, it spoke of something really fascinating happening in females that protects them.”

Haas and her team observed in a 2018 study in Frontiers in Physiology that when mice become obese, females grow a lot of new blood vessels to supply the expanding fat tissue with oxygen and nutrients, whereas males grow a lot less.

In this latest study published in iScience, Haas and her co-authors, including York Ph.D. student Alexandra Pislaru, Faculty of Health Assistant Professor Emilie Roudier, and former York post-doctorate student Martina Rudnicki, focused on differences in the endothelial cells that make up the building blocks of these blood vessels in fat tissue.

“It was very striking the extent of inflammation-associated processes that were prevalent in the males,” Haas recalls. “Other studies have shown that when endothelial cells have that kind of inflammatory response, they’re very dysfunctional, and they don’t respond to stimuli properly.”

Pislaru, who works in Haas’ lab and is a co-first author of the study, participated in this project as part of her dissertation.

“It is exciting to observe the continuing resilience that female endothelial cells display even when stressed by a long-term high-fat diet,” Pislaru says. “The findings from our study can help researchers to get a better understanding of why obesity manifests differently in men and women.”

The researchers also examined the behavior of the endothelial cells when they were taken out of the body and studied in petri dishes.

“Even when we take them out of the body where they don’t have the circulating sex hormones or other kinds of factors, male and female endothelial cells still behave very differently from each other,” Haas explains.

“You can’t make the assumption that both sexes are going to respond to the same series of events the same way,” says Haas. “This isn’t just an obesity related issue—I think it’s a much broader conceptual problem that also encompasses healthy aging. One implication of our findings is that there will be situations where the treatment that is ideal for men is not going to be ideal for women and vice-versa.”

While humans and mice have different genes that may be turned up or down, Haas believes the general findings would likely apply and is interested studying the same cells in humans in future research.