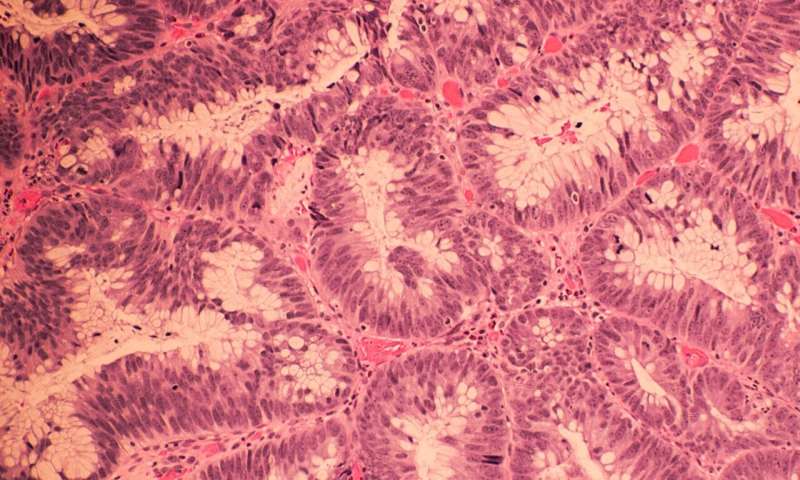 Strains of bacteria that cause common food-poisoning symptoms often contain a toxin that can damage DNA in intestinal cells, potentially triggering colon cancer, according to a study from researchers at the Johns Hopkins Bloomberg School of Public Health.

The findings were published January 12 in the January edition of Cancer Discovery.

Prior research has suggested that certain bacteria that reside in the gut can trigger colorectal cancer via persistent infections involving chronic gut inflammation. Short-term infections causing food poisoning, including traveler’s diarrhea, which normally resolve in a day or two, have traditionally been considered non-carcinogenic.

“We hope this study will motivate other researchers to do epidemiological studies to investigate this potential link between transient diarrheal infections and colon cancer development,” says study senior author Fengyi Wan, Ph.D., associate professor in the Department of Biochemistry and Molecular Biology at the Bloomberg School.

In the study, Wan’s team performed experiments with a mouse model of transient bacterial diarrheal disease using the bacterium Citrobacter rodentium, which has strong similarities to diarrhea-causing strains of the human-infecting microbe Escherichia coli. The researchers observed that Citrobacter infection quickly led to strong signs of DNA damage in gut-lining cells in the mice.

The scientists also noted that the damage was dependent on a mechanism in the bacteria called the Type 3 Secretion System. This syringe-like appendage is used by some bacteria, including Citrobacter and diarrhea-causing strains of E. coli, to inject proteins into host cells. This mechanism facilitates the invading microbes’ growth and survival.

The researchers eventually zeroed in on a T3SS-injected protein, UshA, that accounts for the DNA damage. They found that UshA, which can also be produced by diarrhea-causing E. coli, contains a short segment with DNA-breaking enzyme activity.

The function of this DNA-breaking element in the life cycle of Citrobacter is still unclear. (In the study, deleting it didn’t seem to impair bacterial growth or survival.) But the researchers found evidence in their mouse study that UshA can have a definite cancer-causing effect on the infected host.

The researchers also found that the types of mutations in the Citrobacter-accelerated colon tumors were highly similar to those that have been cataloged in human colon tumors, again underscoring the potential relevance to human health.

A strong confirmation of this relevance won’t be easy to accomplish, Wan says, since transient infections by definition would be long gone by the time tumors develop. (Colon tumors typically develop for many years before they are detected.) Wan suggests that establishing a link between UshA-containing microbes and human colorectal cancers will require epidemiological studies. These, he says, might best be done in sub-Saharan Africa, where diarrhea-causing bacterial infections—and colorectal cancers—are relatively common.

Wan is also now working with collaborating researchers to develop inhibitors of the UshA toxin.