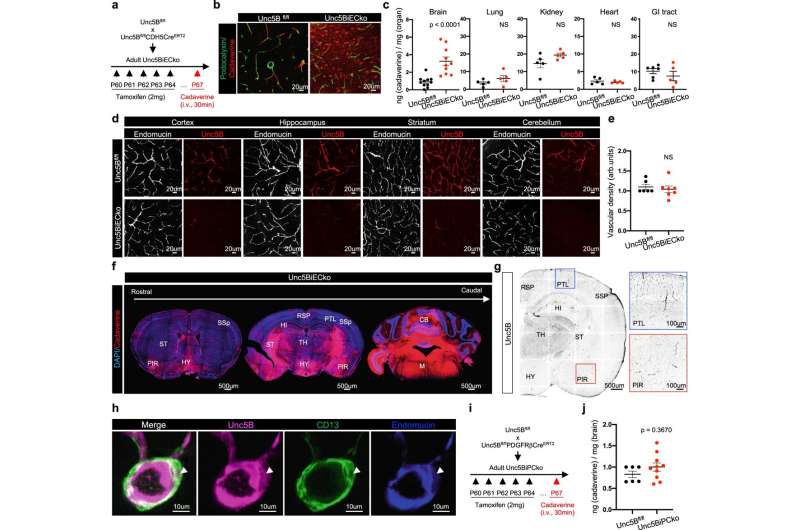 The brain is composed of billions of neurons—vulnerable cells that require a protective environment to function properly. This delicate environment is protected by 400 miles of specialized vasculature designed to limit which substances come into contact with the brain. This blood-brain barrier is essential for protecting the organ from toxins and pathogens. But in the context of neurological disease, the barrier “becomes your worst enemy,” says Anne Eichmann, Ph.D., Ensign Professor of Medicine (Cardiology) and professor of cellular and molecular physiology, as it also blocks the passage of therapeutic drugs.

For years, it has been the goal of neuroscientists and vascular biologists alike to find the magic bullet for temporarily opening and resealing the barrier for drug administration. Now, Eichmann’s team has developed an antibody as a tool for opening the blood-brain barrier for a couple of hours at a time, allowing for the delivery of drugs to a diseased brain. The team published its findings in Nature Communications on March 4.

“This is the first time we’ve figured out how to control the blood-brain barrier with a molecule,” says Eichmann, who is the senior author of the study.

The development and maintenance of the blood-brain barrier are dependent on what is called the Wnt signaling pathway, which regulates a number of crucial cellular processes. Eichmann’s team sought to figure out whether this pathway could be modulated to open the barrier “on-demand.”

When Kevin Boyé, Ph.D., a postdoctoral associate at Yale and first author of the study, joined Eichmann’s lab in 2017, he chose to study a molecule known as Unc5B, an endothelial membrane receptor expressed in the endothelial cells of capillaries. He found that if he knocked out this receptor in mice, they died early in their embryonic development because their vasculature failed to form properly, indicating that it was an important molecule in vascular development. He also discovered that a protein known as Claudin5—which is important for creating the tight junctions between the endothelial cells of the blood-brain barrier—was also significantly reduced. This made the team realize that the receptor could be important in maintaining this barrier.

There was previously no known link between Unc5B and the Wnt signaling pathway. Through this new study, the team figured out that the Unc5B receptor controls the pathway, functioning as an upstream regulator.

”It was quite a fascinating journey, especially the development of our blocking antibodies and seeing that we can open the blood-brain barrier in a very time-sensitive fashion to promote drug delivery,” says Boyé.

Boyé then went a step further and took the receptor out in adult mice with an already established blood-brain barrier, and found that the barrier remained open in the absence of the receptor. Next, he wanted to determine which ligands—which bind to receptors and send signals between or inside cells—were responsible for the barrier effect. He discovered that one ligand, Netrin-1, also caused a blood-barrier defect when it was removed.

Next, the team developed an antibody that could block Netrin-1 from binding to its receptor. Upon injecting the antibody, the team was able disrupt the Wnt signaling pathway, causing the blood-brain barrier to open temporarily on demand.

Because the blood-brain barrier blocks entry to all but a tiny subset of small molecules, neurological conditions such as Alzheimer’s, multiple sclerosis, brain tumors, and depression are exceedingly difficult to treat. Having control over the barrier will be helpful for future drug delivery ventures. The team has not yet identified any potential complications, but plans to evaluate the efficacy and potential toxicity of the antibody in later research.

“This paves the way to more interesting basic research around how the body builds such a tight barrier to protect its neurons and how can it be manipulated for drug delivery purposes,” says Eichmann. “And then there’s also potential to use this as a delivery platform for drugs to penetrate into the brain.”