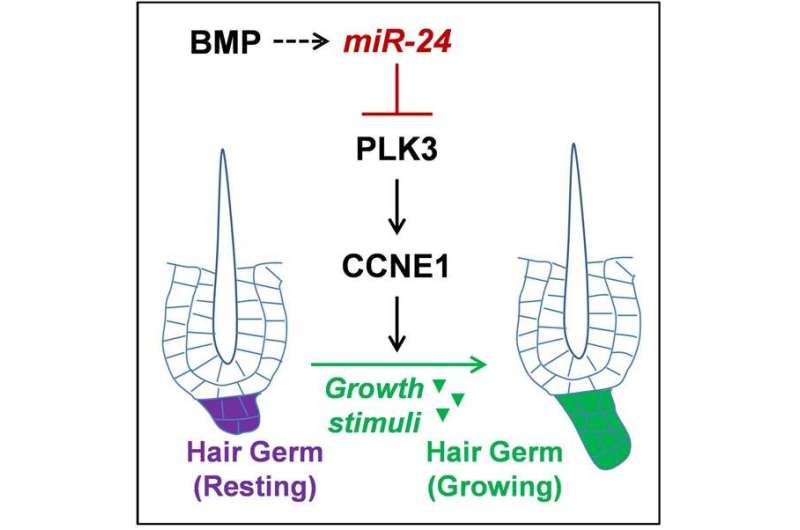 Statistics from the National Health Commission of the People’s Republic of China show that the number of Chinese people with alopecia or hair loss has been rising sharply in recent years, and has exceeded 250 million. However, effective treatment for this disease is still lacking.

In the skin, activation of hair follicle stem cells (HFSCs) and progenitors by growth factor stimulation is the basis for HF and hair regeneration. On the other hand, hair regeneration defects can often attribute to blunted responses of HFs to growth stimuli. However, it is still not well understood how the sensitivity of HFSCs or progenitors to growth stimuli is determined. Elucidating this question will provide important clues for the treatment of hair-related diseases such as alopecia.

In a study published in Cell Reports, Prof. Zhang Liang’s group from the Shanghai Institute of Nutrition and Health (SINH) of the Chinese Academy of Sciences, and the collaborators revealed the role of miR-24 and its mechanism in limiting the regenerative competence of hair follicle (HF) progenitors, enlightening a new therapeutic avenue for treating hair loss.

The researchers found that the resting-to-activation transition of HF is associated with significant down-regulation of a microRNA, miR-24, in HF progenitors prior to their activation.

By constructing and analyzing mouse models, they found that miR-24 acts to limit the sensitivity of HF progenitors to growth stimuli. miR-24 over-expression in the skin epithelium significantly delayed HF progenitor activation and hair cycle progression, while its conditional ablation significantly accelerated hair cycle and sharpened the HFs’ sensitivity to growth stimuli.

It is worth noting that the conditional ablation of miR-24 in skin epithelium significantly improved the effect of Minoxidil lotion on stimulating hair growths without discernible side effects, indicating miR-24 as a new potential target for hair regeneration therapies.

Mechanistically, the researchers discovered that Plk3 is a new miR-24 target gene that mediates the function of miR-24 to limit hair growth by regulating CCNE1, a key cell cycle regulator. They also found that miR-24 acts downstream bone morphogenetic protein (BMP), which is a known inhibitory signal for hair growth.

The findings of this study revealed that miR-24 is a key factor limiting the regenerative competence of skin HF progenitors.