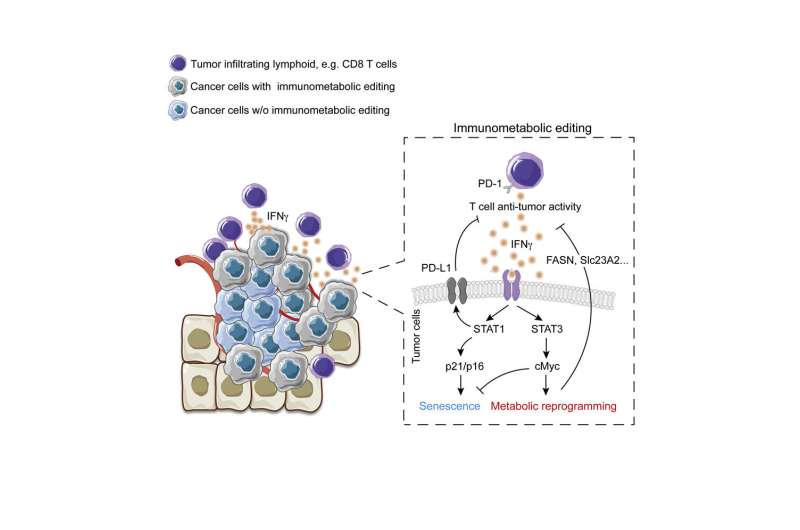 A Ludwig Cancer Research study has discovered that the immune system’s surveillance of cancer can itself induce metabolic adaptations in the cells of early-stage tumors that simultaneously promote their growth and equip them to suppress lethal immune responses.

Led by Ludwig Lausanne Associate Member Ping-Chih Ho and published in Cell Metabolism, the study details the precise mechanism by which this “immunometabolic editing” of emergent tumors occurs in mouse models of the skin cancer melanoma and identifies a novel biochemical signaling cascade and proteins that orchestrate its effects. Aside from illuminating a previously unknown dimension of tumor evolution, the findings hold significant promise for improving the efficacy of cancer immunotherapy.

“We have uncovered dozens of metabolic enzymes that contribute to immune evasion in melanoma tumors,” said Ho. “These enzymes, as well as some of the individual components of the signaling pathway we’ve identified, represent a rich trove of potential drug targets to undermine the defenses erected by immunometabolic editing. Such drugs could make tumors vulnerable to immune clearance and could also be used in combination with checkpoint blockade and other immunotherapies to overcome the resistance most cancers have to such treatments.”

The immune system’s surveillance of cancers is thought to contribute to malignancy by driving the evolution of cancer cells that can undermine the machinery of immune detection and attack. This theory of “immunoediting”—developed most notably by the former Scientific Director and CEO of the Ludwig Institute for Cancer Research, the late Lloyd Old, and Ludwig’s current Scientific Advisory Committee member Robert Schreiber—is now a fundamental principle of tumor immunology.

Researchers have also long known that the metabolic adaptations common to cancer cells—such as their avid consumption of the sugar glucose—undermine anti-tumor immune responses. What was unclear, however, was whether immune surveillance can also induce metabolic adaptations in cancer cells and whether those adaptations can additionally help them resist immune responses. This is what the current study has established, exposing a facet of tumor evolution that has been hypothesized, but has so far remained unproven.

Ho and his colleagues identify three key proteins that orchestrate this effect: IFNγ, STAT3 and c-Myc. An instrument of anti-cancer surveillance, IFNγ is secreted by T cells and other immune cells and known to block the growth of cancer cells. But the signaling it triggers, mediated by a protein named STAT1, also induces adaptations in cancer cells that help them evade T cell attack—the process known as immunoediting.

The researchers show in the current study that IFNγ additionally activates a distinct and little-explored signaling pathway mediated by a related protein named STAT3. This pathway alters the expression patterns of the cancer cell’s genome by inducing “epigenetic” changes that determine which genes are active. It also hyperactivates a master regulator of cellular metabolism known as c-Myc, which is overexpressed in many cancers.

The researchers show that genes activated by c-Myc don’t just shape cancer metabolism, they also compromise the infiltration of T cells into tumors and disable their attack on cancer cells. The signaling pathways mediated by STAT1 and STAT3, in fact, appear to synergize to confer on emergent tumors the critical ability to avoid immune clearance, driving the immunometabolic editing that helps power their evolution into full-blown malignancy.

“Previous studies have shown that the loss of STAT3 activity in cancer cells promotes immune infiltration and induces tumor regression,” said Ho. “Our findings here explain why and suggest that targeting STAT3 with a drug could restore sensitivity to IFNγ in cancer cells that have evolved beyond its inhibitory reach.”

The researchers also used CRISPR genome editing to screen 2,078 metabolic enzymes in the tumors of mice and identified 40 metabolic genes controlled by c-Myc that play an important role in helping cancer cells evade immune surveillance and attack. These enzymes too are prime candidates for drug targeting.

“Aside from its pharmacologic implications,” says Ho, “this study exposes a previously unappreciated dimension of immunoediting that will influence our understanding of the metabolic crosstalk between cancer cells and immune cells in the tumor microenvironment.”