Restaurants should be banned from offering children unhealthy desserts as part of fixed-price menus, leading doctors have said.

The Royal College of Paediatrics and Child Health said stopping the practice could help curb soaring rates of childhood obesity.

Free treats offered by restaurants as part of menus can include ice creams, cakes, and other sweet treats.

One third of UK children aged two to 15 are now categorised as overweight or obese, according to Public Health England figures. 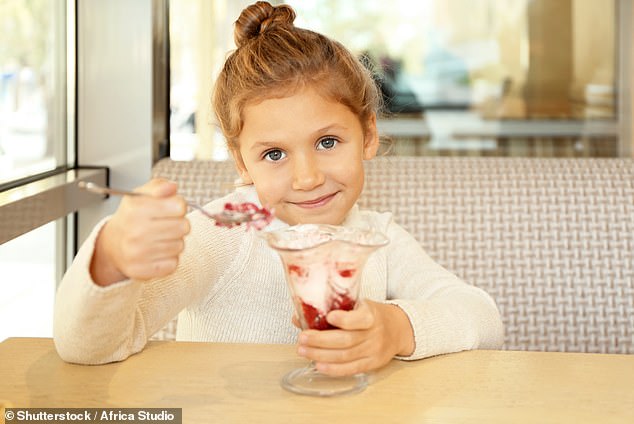 Almost two-thirds (64 per cent) of chain restaurants offer a fixed-price menu in which a dessert is included, according to a survey by the Obesity Health Alliance in February.

Some 87 per cent of the desserts offered were unhealthy. Some did, however, offer fresh fruit.

English children are fatter than ever – official data revealed in October that one in every 25 10 to 11-year-olds are severely obese, the fattest possible category.

And out of around 556,000 children of primary school-leaving age in the UK, 170,000 are overweight to some degree, figures showed in May.

More than one in ever five 11-year-olds are obese – equivalent to around 111,000 children – and being so fat means they are more likely to develop type 2 diabetes, heart disease, cancer or have a stroke.

The Royal College of Paediatrics and Child Health say children should be weighed every year at school because ‘danger is on the horizon’ and the UK is lagging behind the rest of the EU in tackling obesity.

Experts have also warned children gain weight ‘at a drastic rate’ when they’re at school.

Sugar in food is known to be contributing to the swelling waistlines of children, with huge amounts of popular foods crammed full of sugar.

A sugar tax has reduced the effects of some soft drinks, but breakfast cereals can still contain more than 70 per cent of an entire day’s sugar in a single bowl.

Even a single can of Coca Cola (35g of sugar) or one Mars bar (33g) contain more than the maximum amount of sugar a child should have over a whole day.

‘Unless we tackle this obesity crisis, today’s obese children will become tomorrow’s obese adults whose years of healthy life will be shortened by a whole host of health problems,’ Izzi Seccombe, of the Local Government Association, said in May.

The RCPCH has now urged ministers to consider a ban after they consulted on more measures to restrict promotions on foods high in fat, salt and sugar, according to The Times.

Max Davie, the RCPCH’s officer for health improvement, suggested that families often give their children the dessert because it is value for money.

He said: ‘As a parent myself, when I go to a restaurant and use a children’s menu, I feel pressured to allow my children to always have a pudding, even if they are full, because we have “paid for it”.’

Last year 26,000 under-tens were taken to hospital with rotten teeth. Being overweight increases the risk of major health problems including type two diabetes.

The RCPCH recommendations come after it was revealed in January that British children consume 22 stones (140kg) of sugar before the age of ten.

From the age of two, children are consuming an average of almost 2oz of sugar – 52g – a day. This is more than twice the recommended daily maximum.

Children are exposed to unhealthy food messages every day – half of television food and drink adverts seen by children are for unhealthy items or for fast food restaurants, according to research by the Institute for Fiscal Studies.

Evidence shows that exposure to food advertising can have both an immediate and longer term impact on children’s health by encouraging them to eat both straight after seeing the advert and altering their food preferences.

Strict new rules came into effect in July 2017 banning the advertising of foods that are high in fat, sugar and salt in children’s media content, including online platforms.

Junk food adverts during children’s television programmes have been banned since 2007.

But the IFS found 70 per cent of TV campaigns for products high in fat, sugar and salt or restaurants and bars were now screened before the 9pm watershed.

In a major crackdown this year, the government implemented bans on two-for-one deals on junk food and adverts on London’s public transport.

Consultation on the latest phase of the childhood obesity strategy – including a ban on junk food advertising before the 9pm watershed – is already under way.

Calorie content in ready meals, sandwiches and dishes served in restaurants must be cut by 2024 under the Government’s plans.

And latest figures suggest food manufacturers have cut sugar levels by an average of just two per cent, against targets of five per cent.

WHAT IS OBESITY? AND WHAT ARE ITS HEALTH RISKS?

Obesity is defined as an adult having a BMI of 30 or over.

A healthy person’s BMI – calculated by dividing weight in kg by height in metres, and the answer by the height again – is between 18.5 and 24.9.

Among children, obesity is defined as being in the 95th percentile.

Percentiles compare youngsters to others their same age.

For example, if a three-month-old is in the 40th percentile for weight, that means that 40 per cent of three-month-olds weigh the same or less than that baby.

The condition costs the NHS around £6.1billion, out of its approximate £124.7 billion budget, every year.

This is due to obesity increasing a person’s risk of a number of life-threatening conditions.

Such conditions include type 2 diabetes, which can cause kidney disease, blindness and even limb amputations.

Research suggests that at least one in six hospital beds in the UK are taken up by a diabetes patient.

Obesity also raises the risk of heart disease, which kills 315,000 people every year in the UK – making it the number one cause of death.

Carrying dangerous amounts of weight has also been linked to 12 different cancers.

This includes breast, which affects one in eight women at some point in their lives.

Among children, research suggests that 70 per cent of obese youngsters have high blood pressure or raised cholesterol, which puts them at risk of heart disease.

And if children are overweight, their obesity in adulthood is often more severe.

As many as one in five children start school in the UK being overweight or obese, which rises to one in three by the time they turn 10.