Since the onset of the ongoing coronavirus disease 2019 (COVID-19) pandemic, the potential for the severe acute respiratory syndrome coronavirus 2 (SARS-CoV-2) to establish infection in animal hosts has been a pressing concern. Understanding the transmission of SARS-CoV-2 in animals is necessary to prevent the outbreak of wildlife diseases. Furthermore, the potential for the virus to find a reservoir host is also concerning, as this could lead to the continuous spread of SARS-CoV-2 back into human beings.

A recent bioRxiv* preprint offers a powerful risk assessment approach to estimate the risk of bat exposure to SARS-CoV-2 from humans during their interactions in the wild. 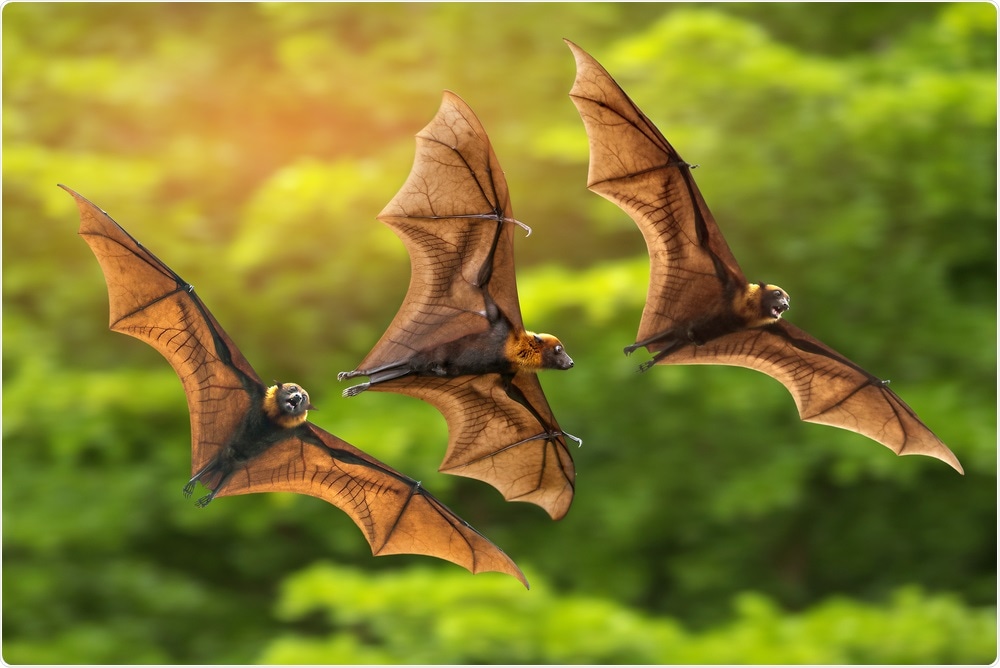 Early on in the pandemic, it became necessary to consider the safety of wildlife that is in constant contact with humans, particularly researchers and caretakers.

During this time, the wildlife management authorities issued a risk evaluation of how likely it was that bats in the wild would acquire the infection from humans. Bats were of interest, as the most closely related strain of a SARS-like virus was detected in the Chinese horseshoe bat (Rhinolophus affinis).

This evaluation was based on the limited knowledge available at the time, the judgment of experts in this area, decision analysis, and a framework to rapidly make use of all available information to arrive at appropriate decisions.

As more data on SARS-CoV-2 continued to be released, the evaluation of the risks to bats was repeated in the fall of 2020 and again in the current study, thereby making this the third in this series. This paradigm will undoubtedly continue to be useful going forward, as new information on the wildlife transmission of coronaviruses like SARS-CoV-2 emerges.

During the first evaluation, the only alternatives that presented themselves to natural resource managers were to allow practices to continue with few additional restrictions, stop all work that could possibly present a higher risk, or implement mitigative actions. It was imperative that the selected choice was supported by evidence-backed data.

However, at that point, there were many unknowns surrounding SARS-CoV-2, including the susceptible bat species, the pathways of transmission, and the changes that various interactions present in terms of exposure and transmission risk.

This new strategy was built on a clear definition of the aims of the wildlife agency, which were then used to develop appropriate quantitative risk models that utilized all available data. Expert judgments were made based on the Investigate, Discuss, Estimate, Aggregate (IDEA) protocol, which included a panel of experts specializing in various fields related to wildlife and bat biology. This reliance was particularly important at these early stages of the pandemic, as there was limited information available on SARS-CoV-2.

The first assessment was carried out in April 2020, which aimed to evaluate the risk of SARS-CoV-2 spreading to North American bats during summer activities. Several agencies were involved in assessing the vulnerability of a small brown bat known as Myotis lucifugus.

This risk assessment was built around research, survey, monitoring and management (RSM), wildlife rehabilitation (WR), as well as wildlife control (WC) activities during the spring and summer in North America.

When this work began, ongoing research on a fungal disease that had reduced the number of these bats by 90% was being conducted. These studies, therefore, required scientists to go into the immediate vicinity of these bats.

Secondly, bats had to be kept out of or removed from houses as part of WC, whereas injured bats were to be cared for as part of WR.

The conclusion was that there was a real risk of viral spread from humans to bats and that the proper use of N95 respirators and personal protective equipment (PPE) would mitigate the risk.

A later assessment on the risk of viral spread during WR in the winter, which is when most activities occur in enclosed surroundings, was conducted to assess whether this season increased the possibility of exposing bats to virus-laden aerosols.

By then, data on the reduction of virus emissions by the use of face masks were widely accepted by the public. The scientists also knew more about how susceptible different species of bats were to the virus.

Several virus challenges in bats had been carried out, and the bat cell angiotensin-converting enzyme 2 (ACE2) receptor, to which the virus binds, had been sequenced. Overall, the experts concluded that several species of bats were at low risk for viral transmission, leading to a new strategy for when scientists work with bats during the winter months.

With plenty of new data published on viral shedding in humans under a variety of circumstances, combined with the widespread availability of COVID-19 testing to ensure that a human is negative prior to interacting with bats, a new round of decision making began.

For RSM, the first-round estimate for the median exposed number during handling was 50 for every 100 bats that would come into contact with the scientists. Of these, it was estimated that less than 20% (median) of bats would be exposed to enclosed spaces if they encountered an infected individual within six feet. Comparatively, in open spaces, this risk was believed to be 6%.

For WR activities, the median exposed proportion was 70% and 24% while handling and within six feet of an infected WR staff person, respectively. The least exposure was during WC, with a median of 28% and 10% in similar surroundings, respectively. 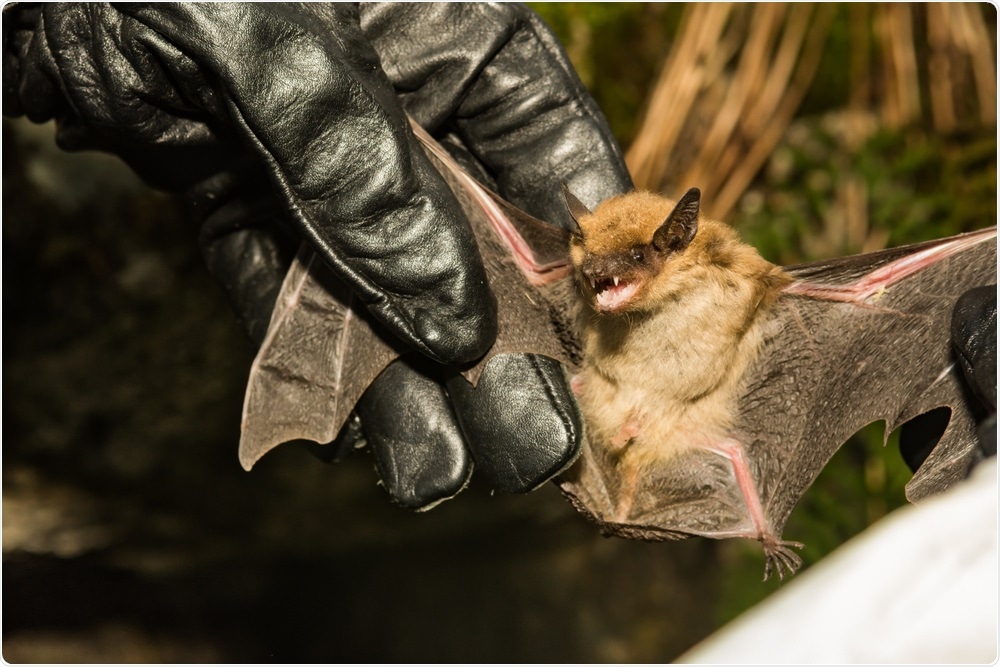 This data shows the utility of vaccination in reducing the infection rates, even though the duration of immunity and its efficacy against the newer variants of concern remains unclear.

Prior to any interaction with potentially susceptible bats, the researchers recommend  COVID-19 testing in addition to properly wearing PPE during such interactions.

The use of PPE reduced median estimates of infection by up to 99% with N95 masks, 89% with surgical masks, 50% with cloth masks, and 24% with face shields, in all types of bat encounters. COVID-19 testing before the bat-human encounters reduced the median estimate of infected bats by up to 67%.

The data discussed here reduced the number of uncertainties surrounding the susceptibility of bats to acquiring SARS-CoV-2. Furthermore, these studies significantly reduced the risk that the bats would acquire SARS-CoV-2 and also allowed alternative management options to be presented. This framework of decision-making was robustly and constantly useful across all three assessments, and will likely remain in place when other similar studies of wildlife disease are conducted.

The ability to estimate the risk allows different options to be chosen depending on the situation, with all options reducing the risk below that which is acceptable for the agency’s objectives. For instance, given the unexpected calls for WR or WC, prior COVID-19 testing may be impossible. In this type of situation, other suitable measures may be used confidently.

“[Expert judgment] It allowed us to rapidly integrate the best available science and knowledge and provide guidance to managers dealing with uncertain but immediate risks to North American bats.”

Though the agencies were kept informed about the results of each assessment, the official publication often appeared after 6-12 weeks of when the studies were completed. This type of delay in data acquisition can cause problems for any agency looking to convince the public of the science-based rationale for its decisions.

The authors, therefore, called attention to the need to expedite the peer-review and publication process when faced with time-critical studies, as they are essential in guiding the public on important precautions and interventions that must be followed in order to reduce the risk to the bats.