Scientists Zachary W. Kockler and Dmitry A. Gordenin, from the National Institute of Environmental Health Sciences, US National Institutes of Health, USA, reviewed the current knowledge of key mechanisms and causes of RNA genome instability in a recent paper posted to the Preprints* server.

“Mechanisms underlying instability of RNA virus genomes are important for better prediction of their evolution, new pathogen emergence, and the development of antiviral drugs.”

Genetic variation (i.e., mutation and other types of genome instability) and natural selection are the two significant factors that interplay in creating a new species. It is known that the remarkably high instability levels of RNA genomes accelerate speciation – enabling us to witness evolution. However, this also presents a threat to the species hosting RNA viral genomes, including the ongoing pandemic of SARS-CoV-2.

The reviewers draw attention to smart survival interplay of the viral RNA genome: 1) striving a balance between a stable genome, which is necessary for transmitting viable genetic material to progeny and to prevent the extinction of species, and 2) instances of genome instability, which are instrumental for accumulating beneficial variants to prepare a species to meet the challenges of ever-changing environments and allow for downstream evolution.

In fact, among all the biological species, the highest mutation rates per nucleotide are found in viruses. The instabilities in the RNA genomes could be due to special features of RNA genomes, RNA virus replication machinery, high selection pressure, and the susceptibility of viral RNA to environmental and/or endogenous lesions.

The reviewers note that these instabilities of RNA virus genomes should speed up their evolution; these insights are important now during the COVID-19 pandemic caused by the RNA coronavirus SARS-CoV-2.

How SARS-CoV-2 evolved to become transmissible between humans is not yet known, but a jump from an infected animal to humans would require the introduction of variants. This may happen through non-catastrophic events of genome instability to gain an evolutionary advantage, the researchers explain. 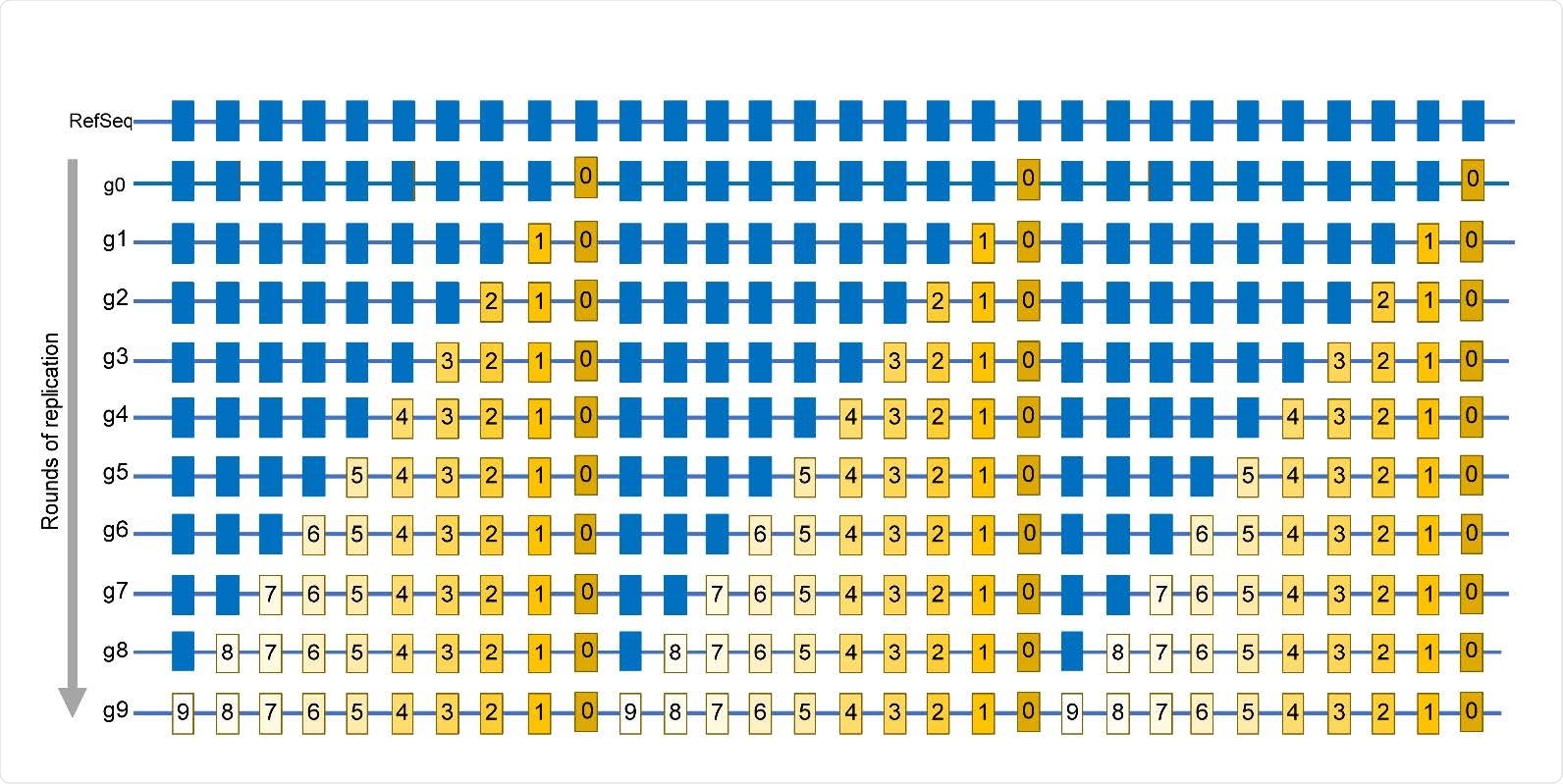 Simplified schematic of mutations accumulation in virus population. Mutations are identified by comparing a sequence of a viral isolate with a reference sequence (RefSeq). Positions in which mutations are found in at least one isolate are shown by rectangles. Blue rectangles are positions same as in RefSeq. g0 – A genome of virus quasispecies starting a population that may already have some differences from RefSeq. g1 – g9 rounds of replication generating additional mutations, which are numbered same as the generation in which a mutation event had occurred. Mutations occurring in later generations would be present in smaller fractions (reflected by the decreasing yellow color density) within the population. The entire set of independent mutation events would be described by the list in which every mutation is represented only once, regardless of the number of genomes where it is found. In this population, such a list is represented by the g9 genome.

The authors elaborate on the possible and likely sources of genome instability that generated the variants and highlight vital questions relating the RNA world to the SARS-CoV-2 pandemic. However, how these key variants were introduced remains unclear.

Under primordial conditions, the RNA in protocells can be a carrier of genetic information which continued through generations – the reviewers discussed different theories associated with this. They also hypothesized that the existing viral pathogens are the remnants of the protocells, though there is no evidence of this.

However, it seems plausible because they rely on cellular transcription and translation systems for the necessary proteins, even though most of the RNA viruses encode for some of their proteins.

The viral RNA genome rearrangements are possible because every time the RNA genomes replicate, errors are often introduced. This is repaired by viral recombination. They point out that if these recombination events include new beneficial genes, it may result in increased fitness of the virus. It is to be noted that such an increase in fitness can be a significant driver of evolution and may create new viral diseases.

Further, environmental and endogenous lesions also occur in viral genomic RNA and cellular RNA. These may be lost or may participate in recombination events. In the review, they also summarized the RNA base modification in a table. They detailed the base substitution mutagenesis in RNA viruses, summarizing that these events generate diversity that can lead to new viruses.

The paper emphasized the importance of studying the impact of RdRp misincorporation and proofreading on viral mutation rates. They also questioned: ‘Are there RNA repair mechanisms besides AlkB direct reversal?’

The scientists raised further important questions and compared technological applications that are anticipated in context to the SARS-CoV-2.

"Besides that, understanding biological and molecular mechanics that allows this group to flourish rather than be washed away with catastrophic error rates represents a fundamental question related to general mechanisms of evolution.”

Overall, the paper presents a comprehensive review on the subject, peppered with valuable perspectives and concludes with insightful technical developments in this field.

preprints publishes preliminary scientific reports that are not peer-reviewed and, therefore, should not be regarded as conclusive, guide clinical practice/health-related behavior, or treated as established information.

Ramya has a Ph.D. in Biotechnology from the National Chemical Laboratories (CSIR-NCL), in Pune. Her work consisted of functionalizing nanoparticles with different molecules of biological interest, studying the reaction system and establishing useful applications.